More Myanmar refugees cross over into India after escaping junta 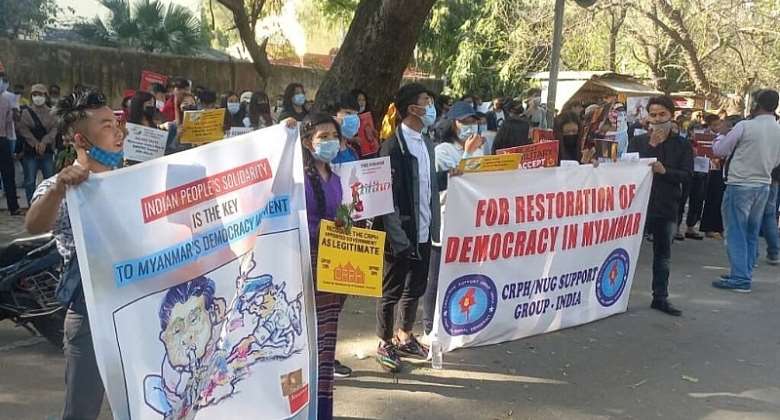 With the escalation of the Myanmar military's attacks on several civilian areas in Chin state, there have been reports of a rise in the number of refugees fleeing into the Indian border state of Mizoram.

Since the military coup in Myanmar in February last year, Chin state has been in the vanguard of the armed resistance to the junta and has, therefore, faced the brunt of the Myanmar army's wrath.

Fresh exodus
Some 15,000 people from Chin state had crossed into Mizoram last July-August during the fighting that broke out between a pro-democracy civilian resistance group called Chin Defence Force (CDF), backed and trained by the Chin National Army.

According to various estimates, about 20,000 Chin refugees are reported to be in refugee camps spread across southern districts of Mizoram, along the Myanmar border.

Some of the refugees encountered several hardships while making the treacherous journey. They were forced to sleep in forests for days, some of them going without food as they made their way toward India

“Getting away was so difficult and my family and I will return only if there is peace,” said Man Chung, who walked for eight days with 5 members of his family to reach India.

“Obviously, things are not so good here but it is better than to live in fear in my own country.”

In Mizoram, the refugees live in shacks with tinned roofs or plastic tarpaulins overhead. With nothing but the clothes on their backs when they fled Myanmar, the refugees do not have adequate warmth, shelter, food, water and other survival necessities.

Enduring hardships
M C Lalramenga, president of the Young Mizo Association of Tuipuiral in Champhai district, said some 50 people crossed in January after renewed violence. Among those who crossed over were four people with injuries apparently caused by a bomb explosion.

“Some of them (the refugees) don't even have blankets and jackets,” Lalramenga told RFI.

NGOs, church groups and village officials had formed “refugee caretaker committees” and were looking after the displaced persons, with the local administration also assisting them.

“We have also been organising fundraisers and distributing relief,” an official from the Mizo Baptist Church told RFI.

Mizoram shares a 510-km border with Myanmar at Chin state, and people of common ethnicities live on both sides of the border, which is predominantly Christian. Many of the locals in Mizoram are also ethnic Chin and have close ties to the Chin people in Myanmar.

Prime Minister Narendra Modi's government has failed to speak up and tell Myanmar's rulers that they must immediately stop this genocide and restore democratic rule.

Last year, India's home ministry had instructed the governments of the North-East states and the paramilitary force, Assam Rifles not to provide shelter to any of the displaced people and to deport them.

But Mizoram Chief Minister Zoramthanga had declined to abide by that order and said it was the duty of the Mizo people to care for the refugees.

Because of this history and kinship, Mizoram has welcomed the refugees with open arms, allocating funds for their welfare in open defiance of the central government's ban.

Going to the IMF with Ken Ofori-Atta as the lead will yield ...
4 minutes ago