Is Rawlings A Threat To The Survival Of Our Democracy 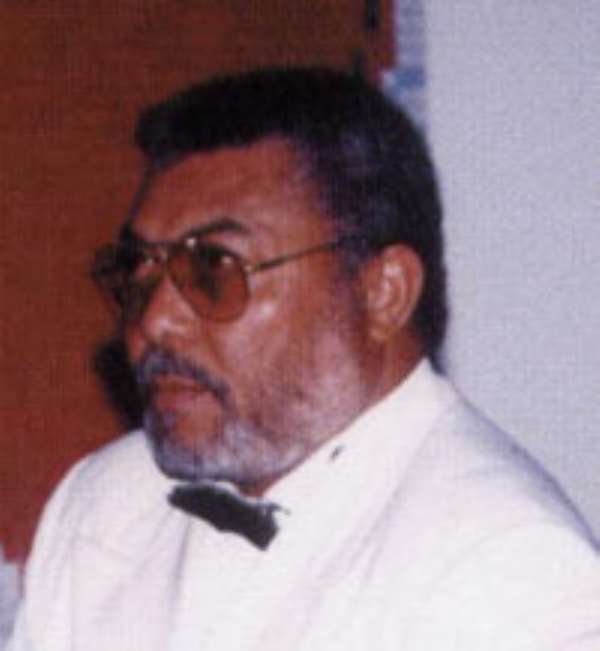 As our struggling nation braces itself for the history busting political showdown between our ex-president, Mr. J.J. Rawlings and the National Reconciliation Commission (NRC), it is becoming alarmingly clear that demagoguery is taking center stage in our national conversation. The troubling questions that keep tormenting us are; why is it that three years after leaving office, our ex-president continues to loom large over the destiny of our country? AND, why is it that one man can generate so much primitive emotion in a nation that is still trying its hand at "democracy"? Of course, it is no national secret that there is "a clear pulverisation of civility whenever Rawlings and his two-pronged revolutionary events become the epicenter of any public discussion". MEN AS CHILDREN! That our ex-president generates unstinting love and unbridled hatred among some sections of our population is not an understatement. Irritatingly, these mutually antagonistic groups ie the Rawlings' lovers and haters, continue to poison the well of public discussion by deliberately accusing each other of imbecility, immorality, nepotism, tribalism, favoritism and above all unsubstantiated criminality. The line is clearly drawn between these two hopelessly irreconciliable groups to the point that their advocacy is becoming irresponsible and reckless each passing day. Their intransigent positions are giving some of us many an uncomfortably anxious moment for many and varied reasons. What is of grim concern to the present writer is that these two groups are doing everything in their power to undercut the peace and tranquility currently pervading in our country. They are conveniently throwing to the dogs the essential democratic ideals of rule of law, probity, accountability, s! unshine and transparency that underpin our democratic experiment and in their stead allowing their negative emotional leanings to take absolute hold on their better judgment.

Need we stress that they are creating unnecessary anxiety and tension in the country? In fact, their mutual distrust for each other has reached such a paranoic level that they have succeeded in convincing themselves that they own the patent to our democratic destiny. Does anybody make any sense of the wee morning raid by our security forces on the quarters of some Rawlings' loyalists in Nungua sometime late year? The thorny questions are: Were the security forces acting on credible information or just acting out of paranoia? Does anybody realise that that singular raid could have generated into something else?

Should the rest of us stand ideally by while these groups hector our dear country into a political strife or violence? History teaches us that in times of such a clearly self-created political conflict these political agitators won't have the moral courage to let their loved ones including their girl friends stay in the country. What they do is to emplane them to the 'cozy' comfort of stable democratic environments abroad (preferably Western Europe and America). Meanwhile, the already suffering and plighted masses are left behind to endure the ravages of their stupid misadventure. What cruel irony!!!!!! Is this not the right time to expose them for what they are - prideless cowards hiding behind their bruised egoes and bankrupt political and economic interests to maintain their stranglehold on the country.

Yes. it is high time we tried to set the political table clean by injecting some dose of reality in this whole sordid development for the sake of our very existence and that of posterity. Indeed, we are too proud a nation to allow these groups to wreck the little comfort the cloutless masses are presently enjoying, if, indeed, there is any such thing called "comfort" for them. COUNTRY GOVERN BY LAWS AND NOT MEN! Regrettably, those leading this ignorable and perverted charge to anarchy are individuals who have obtained all the "enlightenment" academic laurels can bestow! To put this conversation in perspective, let's capture the gravity of their ill-conceived advocacy in the words of two individuals who clearly represent the thinking of these two camps:

Mr. Victor Emmanuel Smith, a special assistant to our ex-president warned the other day that,"if anybody touches the hair of President Rawlings, this country would be plunged into total darkness ...... we are saying this not because we have a private army like they have, but because there are people in this country who recognize what the man did for Ghana in 19 years that he was in office".

Not to be outdone in this brazen display of bravado, one of Rawlings's "haters", Professsor Kwaku Asare rhetorical asked, "where it is clear that Chairman JJR is using state funds to build a plush mansion at Agyrinigano, are the suffering people of Ghana, whose funds are being used to provide millions dollars worth of tile floor for this mansion, entiltled to use vigilante justice?" He, further went on to unequivocably state "the people are bringing justice to the chairman. Mark my words ----- this Agyiringano mansionwill be taken by February 2005!"

Aren't these the same individuals who publicly profess to be 'apostles of democracy' and for that matter believe in the rule of law? So why are they in bed with this kind of gangster advocacy? The simple issue here is: What is stopping them from channeling their real or perceived grievances through those institutions of state (ie the Police, CHRAJ, the COURTS, PARLIAMENT, and above all the media) which are specifically established to deal with these matters in an orderly manner? Have they so soon lost so much confidence in these democratic institutions that they are prepared to resort to extra-judicial help? Lest, I'm misunderstood; I don't begrudge them for exercising their right to free speech. Our beef here is they should at least be responsible enough not to send the wrong messages of plunging the country into "total darkness" and resorting to "vigilante justice" to their emotionally charged and gullible supporters. In short, some of us abhor their despairing slide to l! awless advocacy!

The laws of our land must be respected by all citizens. And, their application must not be skewed to serve the interest of a section of the population. It must apply equally to each and every one of us - be you a Rawlings, a Kuffuor, a Misty of Ash Town or Wofa Kwadwo Asempanaye of my holy village of Paakoso. For example, Mr. Rawlings must respect the NRC's subpoena if it is ever served on him because as a body established by law, each and everyone is enjoined to respect its bidding notwithstanding our reservations about its very existence. For the record, I have always been against the existence of the NRC because I see it more as a polarizing body whose activities are slanted to serve a particular political interest and nothing more! (That is a subject of a whole new discussion later).

In the same vein, our law enforcement agencies should not countenance any act of vigilantism on the part of Rawlings' political enemies. If they have anything against him, they are fully entitled to prosecute same using all available legal channels. If they think that Rawlings has stolen the nation's money, nothing stops them from pursuing that case because after all he taught us that there is a brutal punishment to pay if one uses his/her public office to illicitly amass wealth. I personally don't think our ex-president should have any problem answering questions about whether he has paid appropriate taxes on the numerous gifts he received during his tenure as president or since he left office.Why? Because that is the law he himself helped to put in place. The irresistible issue here is, if other citizens are fulfilling their civic and constitutional duty of paying their taxes, why shouldn't he? Therefore, if, those who are charged with the solemn responsibility of executin! g the laws of our land are cowardly reneging on their duty, why do we blame our ex-president or resort to extra-judicial activity to make him accountable? Do we expect him to investigate himself? And subsequently prosecute himself if he finds any self-incriminating evidence? Haba!

Countrymen and women, the bottom line is that we can't allow intellectual goons and their cabal to fudge the real issues facing the country by their reckless advocacy in this election year. This is not only a political crusade but also a moral one to save our country from these individuals. Ladies and gentlemen, let me reiterate, they don't own the patent to our democratic destiny. We do. And, in fact we are larger than any one individual be he a Rawlings or a Kuffuor. Let our opinion leaders have the integrity and honesty to rise above parochial politics and self-interest and do right by our country. Ghana shall survive. WILLIAM ANTWI (BAFO aka OYOO BUSANGA) NEW YORK, U.S.A Views expressed by the author(s) do not necessarily reflect those of GhanaHomePage.