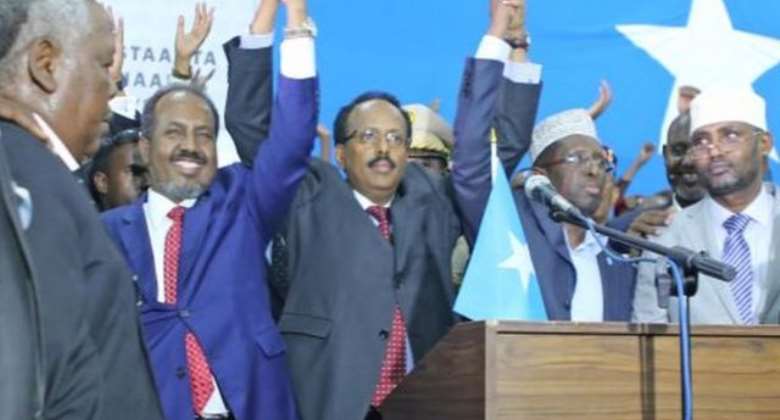 MOGADISHU: SOMALIA. The Long-awaited adjudication and arbitration commission's new chairman is set to take place in Mogadishu today at 11;00 am. The election of the new chairman comes following the usurpation of seven senior members, including the chairman of the dispute resolution committee by the caretaker prime Minister Roble after they were decried and excoriated of impartiality and flagrant or blatant violation of the electoral code of conduct.

The organizing committee for the election of the chairman of the electoral dispute commission has officially stated that among the other requirements and eligibility criteria and credentials required to be submitted by the interested candidates vying for the vacant position and later many candidates were disqualified and excluded after preconditions were attached by the organizing committee and declared that candidate should be a member of the indirect electoral dispute resolution committee.

The committee further elucidated that voting will be by secret ballot and that if the deputy of the disputes electoral commission has declared interest for the seat, then he should tender his resignation first before vying for the seat.

It was anticipated to be tough and competitive election for the polls arbiter and their task should be to negotiate mediate, conciliate, assuage, appease and adjudicate the long list or litany of grievances And pending electoral cases relevant to the indirect polls. The arbitration commission was earlier marred by plethora of allegations which remain unaddressed and unresolved.

Ahmed Awil Warsame has been elected chairman of the elections dispute resolution chairman. (EDRC) in an election widely perceived as free and transparent that was conducted in Afisyone area, close proximity to Aden Adde International Airport in Mogadishu. The security of the scene where the election was taking place was heavily fortified by joint forces of Somali national army and African Union peacekeeping forces in Somalia. (AMISOM)......

The 21 nember panel elected Warsame to supersede Hussein Mohamed who was axed along with six other members by the prime Minister Mohamed Hussein Roble on December 21, 2021 the elected chairman had commended his predecessor and vowed to continue the huge task, burden and responsibility shouldered on him and supplicated Allah to ease or relieve his burdens.

Roble reportedly removed and ousted Mohamud and his inner circles for failing to pre-empt and filibuster the approval of the controversial and rigged election of acting intelligence chief Yasin Farey. EDCR assented and approved Farey's election despite widespread allegations of fraud and irregularities such as Vote buying, ballot-stuffing and gerrymandering.

The elections had commenced so far a very sluggish process that federal member states and releasing partial seats, today Jubbaland state announced three seats up for grabs, the Jubbaland electoral commission has officially promulgated the election schedule for three seats set to be elected in the coming days in the capital of the semi-autonomous region of Jubbaland.

Jubbaland state electoral implementation committee (Seit) has officially declared the names of the traditional elders and civil society members who will select the delegates for the 6 seats in the 11th House of the people of the federal parliament. The electoral committee released last night the election schedule of 6 out of 13 lower chamber seats...

Press statement from the commission said that Saturday 22 has been set for the start of registration and announcement of the selection committee, While Sunday 23 is slated for training the committee and submitting the official list of delegates assigned to elect the new lawmakers of the incoming federal parliament of Somalia.

The commission has also announced that it will commence the process of registration and training of delegates on Monday, the 24th of this month. On the 25th of this month, the commission will register the candidates for the three seats up for grabs while the three-seat election will be held on Wednesday, January 26th in the city of Kismayò..

The following seats are to be contested in Kismayo on January 26.

On the other hand South-west state has Wednesday successfully elected 5 representatives ro the lower house of Somalia's federal parliament in Baidoba becoming the first state to observe the 9th January guidelines adopted at the National council consultative meeting in Mogadishu.

The first seat to be contested for, was Hop184 which was occupied for the last four years by the outgoing FGS Minister of energy and water resources, Hassan Abdinor Abdi, Abdi trounced his main contender or rival, Mohamed Abdullahi Abdi by garnering 72 votes while Mohamed Ali received 27 votes. One vote was spoiled.

The fifth seat, Hop156 seat, was contested by about 100 delegates, with Mohamed Adan Mohamed receiving 88 votes while his arch rival Mohamed Ibrahim Issack received 10 votes losing by two votes. Up to 100 delegates voted for each seat in the recently concluded elections in the city of Baidoba., with the process seen as the right step toward accomplishment of the country's polls.

Is Somaliland closer to being recognized as a nation state? Does Somaliland deserves Universal accreditation?

In a bid for recognizing Somaliland as a Republic. The conservative member of Parliament for Staffordshire Gavin Williamsom introduced a motion to the floor of the House of Commons which was discussed briefly on Tuesday.

Stafford MP argued that it was long overdue for Somaliland to be recognized as an independent State as it had seceded rest of Somalia on May, 1991and fighting for its recognition for almost three decades or period spanning decades.

Gavin a close associate and ally to the current Somalialand president Muse Bihi Abdi, Said he was honored to table the motion.

The federal government of Somalia considers Somaliland as part of Somali territory and come under the sovereignty of Somali state. Although the critics said it is one-clan dominated enclave.

It is an absolute honour to be buying the important issue of recognition of Somaliland to the floor of the house of commons. Our nations have long historic ties and now it is a time to make history together. Said Gavin.

Bihi extended his gratitude to Staffordshire MP and Somaliland diaspora community for fighting jointly the Somaliland recognition and hope that Somalilanders would soon enjoy victory. On behalf of Somaliland government and it's people we appreciate MP Gavin and other MPs who had expressed their willingness towards the recognition of Somaliland as a sovereign state.

Thank you Gavin Williamsom for leading the way and calling for the debate on the recognition of the Republic of Somaliland. I hope your government will be willing to listen to you and other MPs at the house of commons. All Somalilanders in and overseas are waiting for this rightful ambition, Said Muse Bihi..

However, Somalilander's Joy was cut short after UK Minister for Africa, Vicky Ford, Said it was upon Somaliland and Somalia to agree on the fate and their future.

Somaliland which claimed it's autonomy in 1991, has been fighting for recognition by the international community since then; a struggle that is yet to bear fruit. Young Somalilanders consider life as fresh University graduates in their unrecognized homeland. A country is name only, proud but alone in the Horn of Africa. These students were not yet born when Somaliland declared independence from Somalia in 1991. An act still unrecognized by the International community that has left the breakaway region poor and isolated.

Lack of recognition has made life even harder in one of the World's most impoverished region, government officials say, frustrating access to foreign loans and investments. Somaliland's 4.5 million people cannot travel easily as their passports are not widely accepted. For its youth who represent three-quarter of Somalilanders-jobs are scarce even for the best and the brightest.

" The need is there, but there are no opportunities " Said Saeed Salad Ahmed a 26 years old in black gown and tasselled hat, after graduating from the University of Hargeisa.I remain hopeful we are developing and we will continue becoming a better country even if unemployment is an abysmal problem.

For 30 years, Somaliland has tried unsuccessfully to convince the world of its case for Statehood, holding democratic elections and avoiding the anarchy that engulfed the rest of Somalia. Only Taiwan has extended formal recognition, although a few other African and European countries have opened a diplomatic missions in Hargeisa As China considers Taiwan as part of mainland China and threatened to invade and annex by force.

In the ramshackle capital wads of Somaliland Currency swap hands on the potholed streets, as police wearing the national emblem direct cars pressed or laminated with Somaliland plates. Teenagers swap selfie with an ' I ( heart) Somaliland " Monument not far from the war memorial where a war plane relic stands on as testament to the independence struggle.

Thousands gruesomely perished in the brutal aerial bombardments carried out by military Junta ruling Somalia. These airstrikes left Hargeisa so devastated and was completely razed to the ground. It was dubbed " The Dresden of Africa "

Along its disputed border with Somalia and frontier with Djibouti and Ethiopia, the national army keep on an eagle eye watch and closely monitor activities at the boundary. A coast guard patrols waters off the Gulf of Aden, on busy global Shipping lanes.

It elect its own leaders who rule under a constitution, checked by the courts. Somaliland ticked every single question that has been asked by the international community to be a recognized state.

Most Somalilanders are under 30 and have never known anything but self-rule making any chance of reunification with Somalia unthinkable. Government officials acknowledge high rates of youth unemployment but blame Somalia and lack of recognition for holding it back.

Bashir Goth, who represents Hargeisa in Washington, said the west was reluctant to recognize Somaliland until an African nation did first, but support was growing he said. The shadow of Eritrea and South Sudan- -- the last two African nations to achieve Statehood, which turned to repression, genocide and bloodshed---still hung unfairly over Somaliland. " We have a compelling story actually, and I think it is a matter of time" Kenya and Ethopia both act in concert to push the case of Somaliland recognition or accreditation the rest of Africa will follow suit. WIND of change is pummeling Africa As a whole and specifically Somaliland and that wave of recognition is unstoppable; overjoyed because our recognition is looming and imminent it remained a limbo and has been hanging in the balance for decades; now it is realistic...

Author. Holds BA in English Language and literature at Mogadishu University and BA in Business administration at Simad University. Master of arts in applied Linguistics at Kisii University in Nairobi, as well as Master of peace and conflict studies at Uppsala University in Sweden.