Stripping off security covers won't fix your bad economy, We shall provide internal security to protect Bagbin if you dare - Joshua Akamba to Nana Addo 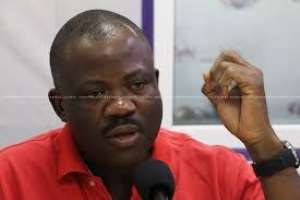 The Office of the National Organizer of the National Democratic Congress, NDC has condemned what it said was the withdrawal of four military officers stationed to offer protection to the leader of the legislature.

Reacting to the news this morning, the National Organizer of the National Democratic Congress, Joshua Hamidu Akamba bemoaned that all attempts by the government of Nana Addo to strip the Speaker off security protection because he was against the LGBTQ+ and E- Levy is unconstitutional and a threat to the security of the state.

The known strategic National Organizer of the NDC, comrade Joshua Hamidu Akamba who warned the government to reinstate the security personnel assigned to protect the right Honourable speaker professed that the National Democratic Congress in the coming days will consider empowering the internal party security to protect the leader of the 8th parliament if the government fails to bring back the military personnel.

A letter dated 11 January and signed by the Chief of Staff of the Ghana Armed Forces (GAF) Major General N. P. Andoh said four military men had been deployed as part of the security of the Speaker of Parliament Alban Bagbin without proper procedure.

It is harshly requested that the personnel is withdrawn with effect from 14 January 2022 while efforts are made to regularise their attachment,” the letter stated.

However, the decision by the military hierarchy has exasperated the National Democratic Congress as a party and millions of Ghanaians.

Indeed, citizens are helpless and hopeless in hands of this Nana/ Bawumia led NPP government, He added.

The National Democratic Congress will be forced to have the power to provide for calling forth their internal security crew to protect the 1992 constitution of Ghana and the speaker of the 8th Parliament to suppress the planned Insurrections and repel Invasions against the right honorable speaker, Alban Sumana Bagbin, the furious National Organizer of the NDC stated.