By Marine Jouvin - The Conversation
Article 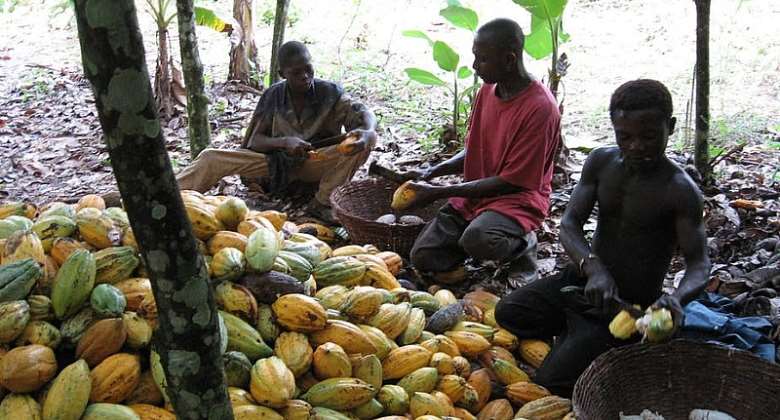 Evidence of child labor in West African cocoa farms had been made public in the late 1990s, with the publication of press articles documenting the existence of hazardous activities carried out by children in the fields. cocoa farms. Since then, to put an end to child labor, ever increasing pressure has not ceased to be exerted on the cocoa industry, in particular by civil society and more recently by the American and European regulatory bodies.

In order to meet consumer demand for more sustainable and ethical cocoa farming, this sector started using certification systems in the late 2000s. Certification labels, such as Rainforest Alliance and FairTrade , aim, among other things, to guarantee cocoa produced without resorting to child labor.

It is estimated that between a third and half of the cocoa sold worldwide is currently certified.

In September 2001, by ratifying the Harkin-Engel Protocol, the cocoa industry pledged to reduce the most dangerous forms of work by 70% by 2020. However, Côte d'Ivoire, the world's largest producer of cocoa, still faces child labor in its cocoa plantations.

Indeed, the number of children under 18 working in cocoa plantations (certified or not) actually increased between 2013 and 2019, and is around 790,000. It seems that 97% of them they perform some of the most dangerous tasks, namely clearing land, harvesting cocoa with a machete or spreading agrochemicals in cocoa plantations.

In my new research work focused on certified cocoa farmers in Côte d'Ivoire, I argue that the actual number of child laborers is likely even higher, as data on child labor can be biased. The results also indicate that certification is not working as expected in this area.

Child labor in the cocoa sector

I have found that the prevalence rate of child labor is probably underestimated in studies conducted by both researchers and the cocoa industry, due to a notion called 'social desirability bias'. This notion refers to people who are reluctant to provide completely candid answers on sensitive topics for fear of negative consequences.

In the case of child labor in Ivorian cocoa farms, certified farmers can lie about it, as the certification systems they have subscribed to prohibit all forms of child labor. Likewise, hazardous work is prohibited by national law.

Fear of legal, social or economic repercussions probably leads certified farmers to underestimate the use of child labor. This makes it more difficult to accurately assess the extent of the problem and adopt effective policies to combat it.

My study was based on a survey method of the list experiment type. This allows respondents to be questioned on sensitive subjects in a more indirect way than standard surveys.

The prevalence rate of the use of child labor, calculated using the indirect method, is twice as high as that obtained from the direct questions. Through the list experiments, I discovered that depending on the activities involved, 21 to 25% of the cocoa farmers surveyed have had child labor in the past 12 months. This difference seems to indicate that at least half of Ivorian cocoa farmers who employ children on their certified farms are not ready to admit it.

Why depend on children

The main factors are, among others, poor labor markets, lack of school infrastructure and difficulties in controlling certified cocoa farmers using children, mainly due to the remoteness of the plantations.

Cocoa production requires a significant amount of physical activity, as many tasks associated with growing cocoa are not mechanized. In addition, as cocoa prices in Côte d'Ivoire are set seasonally, the only way for farmers to increase their income is to intensify their production, resulting in an increase in the workforce.

At the same time, the trend is for Ivorian cocoa farms to be grouped together in cocoa-producing communities. This means that local adult labor is scarce, as most able-bodied adults work on their own cocoa farms and do not seek work on other farms.

Due to this labor market failure - there is more need for labor where it is not available - more cocoa farmers depend on child labor. This phenomenon is even more marked when cocoa farms are located in remote communities, not easily accessible by road. The use of child labor for cocoa farmers is then partly due to the shortage of adult labor. This finding is further confirmed by the fact that the additional presence of an adult in a cocoa farming household reduces the likelihood of being dependent on child labor by at least 4%.

I have further found that the prevalence rate of child labor is higher on more remote farms, which may be due to weaker law enforcement in these areas, an insufficient number of adult workers and by limited possibilities for children to go to school due to the lack of school infrastructure.

Taken together, these results indicate above all that the prevalence rate of child labor, and potentially of other sensitive subjects, has not been measured with precision. Moreover, they show that child labor is still an endemic problem in Côte d'Ivoire, even in cocoa plantations certified without child labor.

Understanding the various reasons for farmers' continued reliance on child labor and their reluctance to admit it is a major first step in designing more effective policies.

By factoring in the phenomenon of social desirability bias in future research, governments and development partners may be able to more accurately measure child labor in and inform more effective policy making.