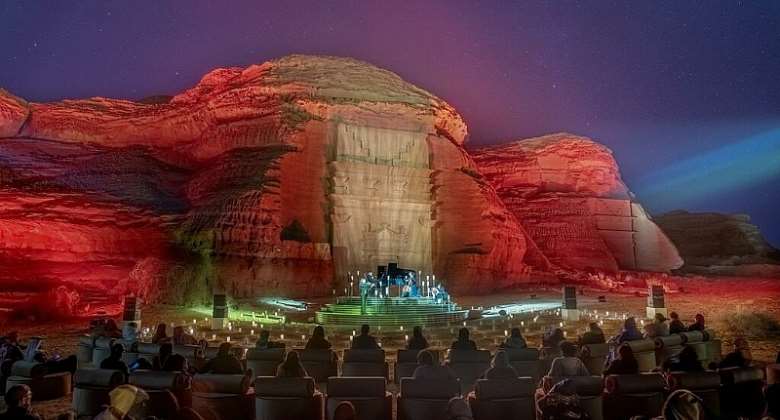 Saudi Arabia hosted a special New Year's concert in the archaeological site of Hegra, not far from Alula, one of the oldest cities in the Arabic peninsula, over the weekend to ring in the New Year.

Hegra is a UNESCO World Heritage Site famous for having more than 100 monumental tombs carved from rock formations.

Unique location
This was the second concert held in this unique location in the middle of the desert. The first was held on Christmas Eve. Both were the brainchild of Italy's Balich Wonder Studio, known for their opening and closing ceremonies of Olympic Games and other large-scale shows around the world.

Thde audience listened to a collection of small pieces in a range of genres, including classic compositions, contemporary, Arab, movie soundtracks and revised takes on pop music.

The instruments used for the live performance by South Africa's Stefan Lombard ensemble included Lombard himself on piano, David Bester on the violin, Dorette Roos on the cello and Simon Stengel on the oud.

The performance was lit by 500 high-tech candles, sculpted by hand.

The electric candles shone all night thanks to modern technologies which also allowed them to shine four times brighter than a traditional candle without burning or melting.

Alula Moments
The two Candlelight Concerts,on 24th and 31st December, are part of the Alula Moments Season, especially designed for Saudi Arabia's first music and arts festival, Winter At Tantora, now back in a 6-week format which will run until 12th February.

Bocelli's concert on Thursday for an audience of less than 300 is believed to have been the first-ever performance within the walls of the ancient desert city of Alula.

It was his third performance in Saudi Arabia. One of the highlights was his 9-year-old daughter's Middle Eastern debut with her father on stage playing the guitar.

The live entertainment group, Balich Wonder Studio, has a branch based in Saudia Arabia which was appointed by the Royal Commission for Alula to produce multiple activities throughout the season at Hegra.