Does God Need A Cathedral, Or Justice And Socio-Economic Equity For The Poor? 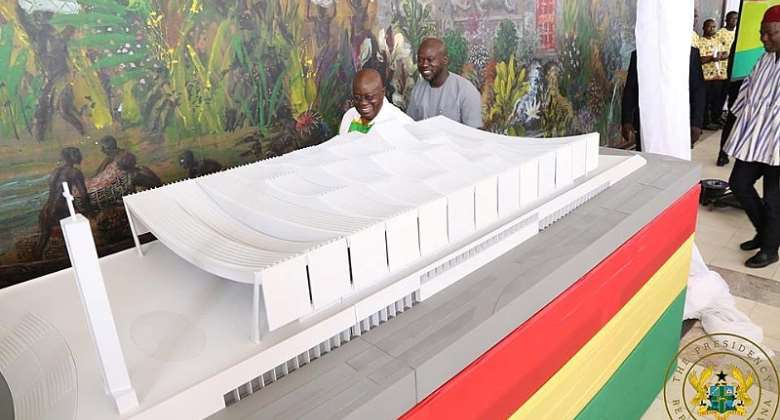 I am not against building a cathedral by any church in Ghana, provided they can afford to do so without government involvement. However, I have a problem when a government that cannot afford to pay its bills unless they impose taxes on electronic transactions by both the rich and the poor proposes to build a national cathedral. I have a problem when the Ghanaian government spearheads the building of a cathedral when patients sleep on hospital floors and school pupils study in dilapidated structures.

Further, I am against the obliteration of the secular and the sacred: This project symbolizes a direct connection between the political and the Christian elites. We do not have a theocratic government in Ghana, but a secular and democratic representative government, consisting of the traditionalists, Christians, Muslims, and other religious groups. A national cathedral that serves as a Christian sacred space and symbolism in a pluralistic country like Ghana can be problematic.

The building of a Christian Cathedral by a secular democratic government with a selected group of Christians leaders who had secured their place in the political platform is just a demonstration of the unholy alliance between the economic and political vampires on the one hand and the bankrupt ecclesiastical vampires, on the other hand: Collaborating in their efforts to deceive, seduce, and ransack the ordinary people of Ghana. Unfortunately, the church that is supposed to stand in for the downtrodden in our society has become professional prophets working in collaboration with the bankrupt political system to exploit the poor.

First, God does not dwell in temples made with human hands but the temple of our hearts. The Babylonians destroyed the First Temple in Jerusalem, and the Romans also destroyed the Second Temple in Jerusalem. The destruction of the temple and the deportation were seen as fulfillments of prophecy and strengthened Judaic religious beliefs. These were the charges that the Lord brought against the people of Israel in Amos 2:6-8: This is what the Lord says: "For three sins of Israel, even for four, I will not relent. They sell the innocent for silver and the needy for a pair of sandals. They trample on the poor heads as on the dust of the ground and deny justice to the oppressed. Father and son use the same girl, profane my holy name. They lie down beside every altar on garments taken in pledge. "

The three main charges brought against the people of God were: The oppression and maltreatment of the poor, idolatry, and adultery. These are the three main anti-social activities in our churches and politics today. However, these two groups want to collaborate to build a cathedral for God. Ask this fundamental question: Will God prefer hospital beds to treat the poor of their sicknesses and illnesses, or see the construction of a cathedral where the exploiters of the poor will visit on Sundays and other occasions?

The Scriptures tell us in Acts 7 about the kinds of temples that God desires. Acts 7:47-53, "But it was Solomon who built a house for him. However, the Highest does not live in houses made by human hands. You stiff-necked people! Your hearts and ears are still uncircumcised. You are just like your ancestors: You always resist the Holy Spirit!" I want all Christians to read verse 51 carefully and reflect on it. "You stiff-necked people." Oh, that means a lot! You priests and political leaders frequent my house every day, but you go back and exploit the people and impoverish them.

In 1854, the great Danish philosopher and Theologian Soren Kierkegaard attacked the Danish established Lutheran church, describing it as "Christendom." His main concern was the blending of Christianity with the world. - A confusion of church and state eliminates the character and practices essential for genuine Christian existence. For Kierkegaard, the failure of the church and its clergy to live according to the New Testament tenets was an abomination; according to him, the public worship of the Christians was a blasphemous insult to God.

The Scriptures declare, "You are the salt of the earth. But if the salt loses its saltiness, how can it be made salty again? It is no longer good for anything except thrown out and trampled underfoot. You are the light of the world. One cannot hide a town built on a hill. Neither do people light a lamp and put it under a bowl. Instead, they put it on its stand, giving light to everyone in the house.

But Kierkegaard's criticisms of the Danish church were correct: most apply to the church in Ghana today. The Ghanaian Christian Community is characterized today by a vast and ignorant complacency. Our proclamation of Christianity tones down, veils, suppresses, omits some of what is most decisively Christian, what is too inconvenient for us, what would make our lives strenuous, and what prevents us from enjoying life. We are all guilty as charged.

Christianity has transformed itself into something different from the message bequeathed to the apostles and preached by both the apostles and the church fathers. We are no longer living out our faith that was delivered to the Saint once for all. (Jude 3). It is no more "My father's house," but a den of thieves, shrouded in criminality. As Christ's disciples, we are to perform the work of love and stand in witness against social structures and political systems that oppress and enslave people. Our Christianity is not the Christianity of the New Testament. We have to ask: what does it mean to be a Christian to provoke Christian self-examination with the view to genuine repentance.