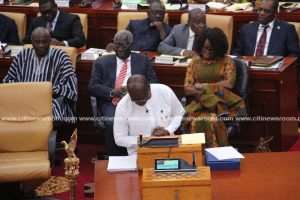 The Regional Entrepreneurship Freedom Index (REF Index) is an in-country study of entrepreneurship freedom within all the sixteen (16) regions in Ghana according to a set of indices affecting entrepreneurship. This includes trade freedom, freedom from government, monetary freedom, labour freedom, investment freedom among others.

The report of the study which was launched by the Africa Centre for Entrepreneurship and Youth Empowerment (ACEYE), an independent and non-partisan policy think tank reveals that on a scale of ten, only four out of the sixteen regions are above the red line (5.0 and above) indicating entrepreneurial freedom. The remaining twelve regions fall below the average with majority scoring very low marks, a sign of repressed entrepreneurship freedom.

The Eastern region emerged first with a score of (6.36) out 10, followed by Ashanti region (5.50), North East region (5.25) and Upper West region (5.25). However, Upper East, Bono and Oti regions recorded extremely low score of (2.77), (2.31) and (2.30) respectfully. This raises a major concern especially when the government is calling on youth to venture into entrepreneurship and the continent is championing a free trade among member states.

From the study, ACEYE puts forward the following 12 recommendations for government and policymakers as a road map for addressing the entrepreneurship gap in the country:

1. The government should standardize the licensing and regulatory requirements and constantly educate entrepreneurs on them.

2. Legal education must be freed to encourage innovations that could engender a more robust way of addressing challenges such as complexity of judicial processes and missing case dockets the judiciary is engulfed in. Government should provide resources, encourage judicial effectiveness and integrity.

3. Banking services must be localized and accommodative of start-ups.

4. The interest rate must be lowered for these regions.

5. Local chiefs must set a target of having their area as litigation-free areas.

6. The government should not waste monies on creating state enterprises in these regions.

7. People must have confidence in the entrepreneurial ecosystem

10. Ghana must build on its indigenous institution which has been the enabler of entrepreneurship before independence. The Chieftaincy Act must be amended to grant devolutionary powers to the overlords of the various regions or smaller economies to administer local business and trade disputes.

11. Work closely with independent, Investigative bodies to investigate public and civil servants engaged with unexplained wealth. Parliament should ensure the Office of the Special Prosecutor is encouraged, supported, and compelled to prosecute culprits of such investigations or reports.

12. Government must ensure confidence in security on major highways especially inter-regional routes. This should include periodic patrol team’s rollout and strategic positioning of law enforcement centres.