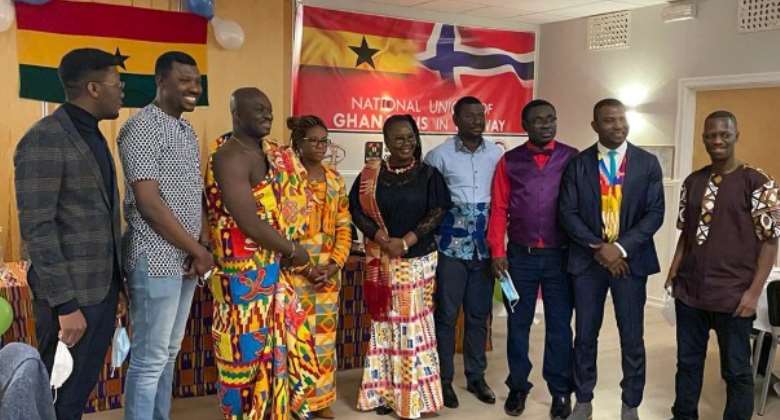 The Ghana’s Ambassador to the Kingdom of Norway, H.E. Mrs. Jennifer Lartey has inaugurated the National Union of Ghanaians in Norway (NUGN).

The colourful event and end of the year get-together took place on [Saturday] December 4, 2021 at Lyngbø Sportsklubb, Gravdalsveien 9, 5165 Laksevåg in Bergen, Norway.

The purpose of the National Union is to create a platform for networking and collaboration amongst the local and regional unions in Norway. In addition, the union will work for the welfare and common good of all Ghanaians living in Norway.

The formation of the union will also collaborate with Ghana’s Embassy in Oslo, Norway to champion the interests of Ghana and Ghanaians in Norway regardless of which political party is in charge of affairs in Ghana.

The NUGN in Norway will also support national ‘nonpartisan’ developmental projects in Ghana as a way of giving back to the Ghanaian society and be the voice and representative of all Ghanaian associations/unions in Norway in the planned larger Ghanaian Union.

Addressing the gathering, Mrs. Jennifer Lartey commended the various Associations and Unions for spear-heading the agenda for the inauguration of the national union.

“You may recall that in the latter part of 2019, I made a clarion call for the various Ghanaian Unions and Associations in the respective cities in Norway to consider forming an umbrella body that will have one voice, one passion and one agenda to represent the Ghanaian Diaspora in Norway. This was following my attendance at a similar launch of the Council of Ghanaian Associations in Denmark where I saw at first-hand, the importance and benefits of such a Union. It therefore gives me great joy to witness the inauguration and launch our own National Union” Mrs Lartey stressed on the importance of the union.

In all, eight (8) members from the various unions were appointed to serve on the Board of the National Union of Ghanaians in Norway. They are, Lawrence Newman (President), Gifty Ohenewaa Nordbø (Vice President) of Ghana Union Vestland, Bergen; Charles Ohene Nti (President), William Amoah (Secretary) from Association of Ghanaians in Rogaland.

However, Gifty Ohenewaa Nordbø is Co-ordinator/Chairperson for the Board of the NUGN. Joseph Kyei-Boateng is Secretary to the board and he is being assisted by Samuel Senanu, the rest are board members.

The Ghana’s Ambassador charged the newly appointed executives of the National Union of Ghanaians in Norway to use the opportunity to serve the Ghanaian community and not one of privilege, entitlement, or power.

“The Office and new positions which you are about to occupy should be seen as an opportunity to serve the Ghanaian community and not one of privilege, entitlement, or power. Always remember that leadership is about compassion, the desire to serve a purpose greater than yourselves, leading by example and having integrity” She cautioned.

“As you chart this new course, I would like to remind you that the road to success is not an easy one. How successful this Union becomes will not be determined by the number of times it fails or the difficulties it encounters. Your success will be determined by your ability to rise up each time you fail and your ability to learn from these experiences” Mrs. Lartey encouraged them to champion Ghanaians interest.

On investments in Ghana, H.E. Mrs. Jennifer Lartey said the Ghanaian Diaspora continues to be high on the President Akufo-Addo’s government's list of priorities.

“Having meaningful engagements with the Ghanaian Diaspora continues to be high on the Government's list of priorities. That is why a Diaspora Affairs Office was set up at the Office of the President in February 2017. Government believes that Ghanaians in the Diaspora are a strategic and important resource for Ghana in her development agenda” she emphasized.

“With an estimated annual inflow of about $5billion coming to Ghana formally and informally through remittances, the Diaspora Affairs Office has among other objectives, an aim of exploring more significant ways Ghanaians in the Diaspora could contribute to Ghana's socio-economic development and also efficiently harness, mobilise and steer Ghanaian inclusion, economic and socio-cultural resources in the Diaspora for political development. I therefore look forward to the future engagements between the Embassy and the National Union Norway. Please be assured that the Embassy would continue to play an active role in this endeavour” Mrs. Lartey told the gathering.

Speaking to Adom FM’s Abednego Asante Asiedu on the side line of the event, Mrs. Lartey urged the Ghanaian community in Norway and diaspora to woo investing communities to invest heavily in Ghana to boost the country’s economic and create more opportunities for the citizenry.

According to her, President Nana Addo Dankwa Akufo-Addo’s administration as part of its vision "Ghana Beyond Aid" agenda has put in place the enabling environment for businesses to thrive in the country hence the need for investors to invest in the West African sub-region.

Ambassador Lartey also charged Ghanaians in Norway who are not part of Ghanaian unions in various cities to join for the betterment of their individual welfare and Ghana’s development.

Meanwhile, Mr. Lawrence Newman, the President of Ghana Union Vestland, who spoke on behalf of the Board of the NUGN assured that the union will champion the interest of Ghanaians in Norway and also intend its support back home in Ghana.

As of now, the board of the NUGN is quickening efforts to help inaugurate local unions in Tromsø and Harstad and two members each of these unions will be represented on the board of NUGN.

On his part, President of the Organization of African Association (OAA) in Bergen, Mr. Emmanuel Kofi Babatunde who was excited about the move said the inauguration of the National Union of Ghanaians in Norway is long overdue.

Mr. Babatunde added that “the idea came about because of the desire to build a common front to meet some of the challenges posed by the Ghana Embassy in Denmark. The absence of a strong will quickly nibbed the idea. Today, thanks to the initiative by Madam Ambassador, [H.E. Jennifer Lartey] and her persistence and strong leadership role, this union is seeing its first daylight today. 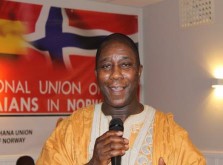