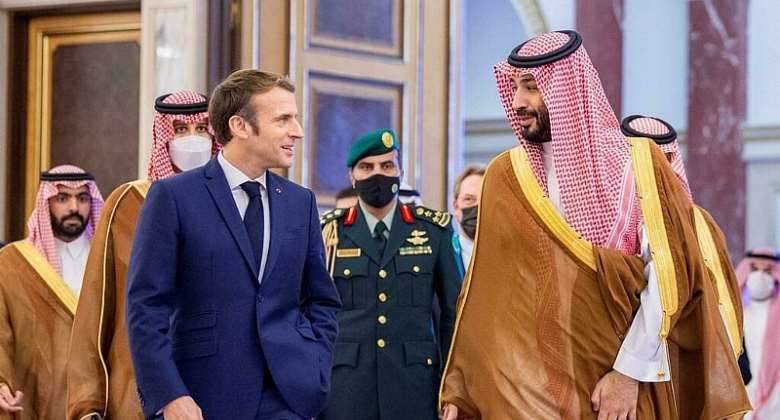 France and Saudi Arabia have committed to "fully engage" to resolve a diplomatic row between the Gulf kingdom and Lebanon, visiting French President Emmanuel Macron said Saturday. His tour of the region also included the signing of several lucrative arms and other business deals.

Macron's announcement came after meeting in the Red Sea city of Jeddah with Saudi Arabia's de facto ruler, Crown Prince Mohammed bin Salman, with whom he said he had a "no taboos" discussion about human rights.

Macron said that he and Prince Mohammed held a joint telephone conversation with Lebanese Prime Minister Najib Mikati in an effort to resolve the crisis that was sparked in October between Beirut and several Gulf states -- in particular Saudi Arabia, which had blocked imports.

Saudi Arabia and France "want to fully engage" on re-establishing relations between Riyadh and Beirut, the French president told reporters before his departure.

"With Saudi Arabia, we have made commitments towards Lebanon: to work together, to support reforms, to enable the country to emerge from the crisis and preserve its sovereignty," Macron said on Twitter.

Deep crisis
Mikati said later that the phone call was "an important step towards resuming historical brotherly relations" with Riyadh.

Macron said he would speak with Lebanese President Michel Aoun by telephone on Sunday.

The Gulf dispute has exacerbated an already dire situation in Lebanon, which is in the grip of a deep economic and financial crisis.

Macron's efforts likely received a boost by the resignation of Lebanese information minister Georges Kordahi, whose remarks on the Saudi-led intervention in Yemen sparked the row.

The French president has spearheaded international efforts to help Lebanon out of its economic downturn, as the country's fragile government has been struggling to secure international aid, particularly from wealthy Arab powers.

Lebanon's ties with Gulf states have also grown increasingly strained in recent years due to the growing influence of Iran-backed Lebanese movement Hezbollah.

He became one of the first Western leaders to meet with Prince Mohammed in the kingdom since Saudi journalist Jamal Khashoggi was killed and dismembered inside Riyadh's Istanbul consulate in 2018.

However, dialogue with Saudi Arabia was necessary to "work for stability in the region", Macron said on Friday, adding in a reference to the Khashoggi murder that "it doesn't mean that I endorse anything".

"I note that Saudi Arabia had organised the G20 summit... not many powers boycotted the G20," despite the Khashoggi affair, said Macron.

"We have always been clear on the issue of human rights or this case."

Riyadh has described the murder as a "rogue" operation, but both the US Central Intelligence Agency and a United Nations special rapporteur have directly linked Prince Mohammed to the killing, a charge the kingdom vehemently denies.

France has a role to play in the region
"But how can we work for regional stability and on Lebanon and many other issues while ignoring the first Gulf state in terms of geography and size?" he said, referring to the kingdom which is the Arab world's largest economy, and the world's biggest crude exporter.

France's Airbus said it signed a contract in Jeddah on Saturday to sell 26 civilian helicopters to a Saudi firm, while French waste management company Veolia said it had won a contract for drinking water management in Riyadh.

The French president's departure from Jeddah ended his Gulf tour, which also saw him visit the United Arab Emirates and Qatar.

On Friday, the United Arab Emirates signed a record 14-billion-euro contract for 80 French Rafale warplanes, a decision criticised by Human Rights Watch who said the Emirates had played "a prominent role in the Saudi and UAE-led coalition's atrocity-ridden military operations in Yemen".

The Saudi-led coalition intervened in 2015 to support Yemen's internationally recognised government. The UAE remains part of the alliance but started a drawdown of troops in 2019.

Woman arrested for cooking 3-year-old daughter over missing ...
49 minutes ago