Sosu, Why The Hullabaloo? 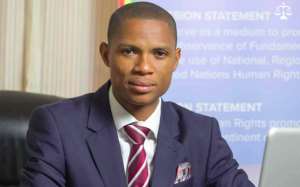 “In war, you can only be killed once, but in politics many times”. - Winston Churchill

“An empty stomach is not a good political advisor.” - Albert Einstein

THE HARROWING NEWS WAS ALL OVER: “Sosu Hot (Hides under Bagbin)”; “Police Grab Sosu” (by Criminal Summons); “Xavier Sosu escapes another arrest”; “Police deny reports of attempted arrest of MP at church”; “Madina MP out of the country-Speaker tells police.”

For the past fortnight or so, it has been 'Sosu here, Sosu there, Sosu everywhere'. Well perhaps that is what Francis Xavier Sosu from Denu born in Accra New Town who was called to the bar in October, 2010 and entered Parliament in 2017, relishes. It all started on Monday, 25th October when he organized his constituents of Madina Constituency. Perhaps, like drunken Rip Van Winkle, who snoozed for 20 years in Catskill Hills, America, the observer might say during the 8-year rule of Prof. Atta Mills-cum-Mahama administration, they had properly asphalted the road network, in Madina constituency, but unfortunately, Akufo-Addo administration decided to destroy it and make it unmotorable. The President could not have been sleeping (as he is alleged to have done once in Opposition) but be awake and alive to Article 35(7), of the 1992 Constitution: “As far as practicable, a government shall continue and execute projects and programmes commenced by the previous government”, (“ceteris paribus”… all things being equal – but have all things ever been equal?)

Then, bingo, the opportunity had offered itself for the “true lovers” of the MP to show their love by blocking the public highway, burning tyres and destroying public property. All these – contrary to provisions in the Public Order Act, 1994 (Act 491) which provides in Section 3(1) “Where at a special event damage is caused to public property the organizer or any other persons found to have been responsible for the damage caused are liable to pay for the cost of the damage (2) A person taking part in a special event shall obey the directions of public officers safeguarding the proper movement of any other persons and vehicles and generally maintain order”.

The demonstrators danced to Bob Marley's “Stand up, stand up, stand up for your rights”, and clad in red (mostly) they sang: “Y'ani abrekoo!” The MP apologized for the “inconvenience” to motorists, but stressed: “Enough is enough”, Everyone is crying out for peace, yeah, none is crying out for justice”. Peter Tosh sang beautifully and the syncopations by the teeming youth were lively and lovely.

The message was terse: if government does not fix the road, the demonstrations would continue – perhaps unabated! The people of Madina were “demanding” their share of the “Year of Roads.”

The Police wanted the MP for investigations into breaches of the Criminal Offenses Act, Act 29 and the Public Order Act. They, therefore, wrote to the Speaker of Parliament on 27th October, 2021; the MP petitioned the Speaker, Alban Bagbin, to cite ACP Isaac Kojo Asante, Regional Operations Commander and ACP Eric Winful, the Adenta/ Abokobi Divisional Commander of Police for contempt of Parliament!

The MP relied on Article 117 of the 1992 Constitution for his action: “Civil or criminal process coming from any court or place out of Parliament shall not be served on, or executed in relation to, the Speaker, or a member or the Clerk, to Parliament while he is on his way to, attending at, or returning from, any proceedings of Parliament.”

Honourable Sosu also cited Order 28 of the Standing Orders of Parliament: “An act or omission which obstructs or impedes a member or officer of Parliament in the discharge of his duties or affronts the dignity of Parliament or which tends either directly or indirectly to produce such a result shall be contempt of Parliament.”

The MP had gone to a part of the area where people were burning tyres, and tried to talk the youth out of that action: “Together with Police, I spoke with the youth and they deescalated even before we began the demonstration and protest from Otinibi to Ayi-Mensah. In flagrant breach of the laws of Ghana which relates to privileges of Members of Parliament, the officers mentioned herein, led the way and attempted to forcefully apprehend me in the presence of my constituents, an act which I verily believe amounts to contempt of Parliament. It took the intervention of the teeming youth to rescue me and lead me to my vehicle where I finally sped off.”

Hon. Speaker Bagbin wrote to the Police, per the Deputy Director of Legal Services of Parliament: “I am directed by the Rt. Hon. Speaker to inform you that proceedings of the 3rd Meeting of the 1992 Constitution of the Republic, he is unable to release the Members of Parliament as requested in your letter…(he) further directs that I refer you to the provisions of Article 122 of the 1992 Constitution and to inform you that on Wednesday the 27th October, 2021 he referred to the Privileges Committee of Parliament allegations of breach of Parliamentary privilege and contempt by ACP Isaac Kojo Asante and ACP Eric Winful…”.

The case was called at the Kaneshie District Court on 8th November with Sosu summoned on bench warrant, but the MP was absent. There was a letter from the Speaker to the effect that Hon. Sosu was out of the country on Parliamentary duties.

The question remains: will Hon. Sosu ever make himself available to the court? Yes, we guess so, because it is only the President who has “absolute immunity” under Article 57(5) of the 1992 Constitution: “The President shall not, while in office as President, be personally liable to any civil or criminal proceedings in court. BUT Article 57(6) states: “Civil or criminal proceedings may be instituted against a person within three years after his ceasing to be President.” The immunity for MPs is being over-flogged to dizzying heights. MPs need to acknowledge the fact that there tends to be a lacuna in every law. It is always dialogue that enables a society to run. The seeming hung Parliament (or balanced Parliament) need not deceive anyone into thinking that Parliament has absolute control over Rule of Law and Separation of Powers in Ghana – there is always room for negotiation (sometimes behind closed doors) Parliament that makes the law should not violate the very laws it makes, and Sosu, a very young man with so many years of political life ahead of him should not be swayed into any political tango. Parliament needs to tarry and not clothe itself with powers it does not have under the 1992 Constitution, we pray.