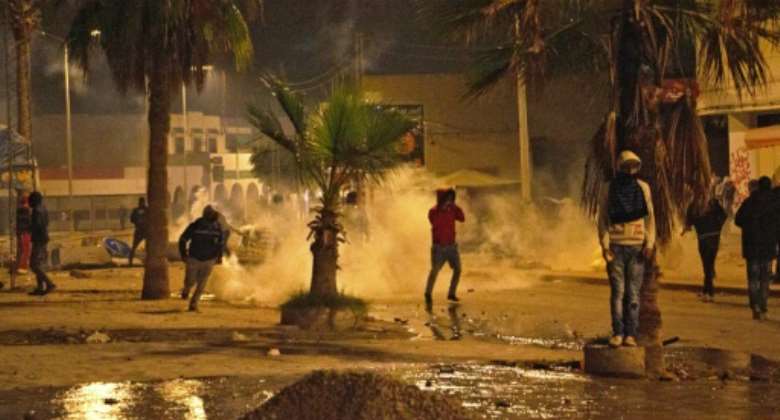 Tunisian security forces fire tear gas early Tuesday to disperse demonstrators protesting against the reopening of a landfill site in the central town of Aguereb. By HOUSSEM ZOUARI (AFP/File)

A Tunisian city held a general strike on Wednesday, after a protester died of tear gas inhalation during angry demonstrations over the reopening of a rubbish dump.

A medic and a family member said he had died of asphyxia.

The prosecution has opened an inquiry into the incident, while the interior ministry said the man had died as a result of a pre-existing health condition.

On Wednesday, the city observed a general strike across the public and private sectors, following a call by the powerful UGTT trade union confederation to protest what it called a "savage intervention by security forces".

Thousands of people joined a march against violence by security forces and demanding that the landfill site remain closed, an AFP journalist reported.

The wider Sfax region has been gripped by weeks of protests over the rubbish crisis, which has seen trash pile up in the streets.

The Aguereb landfill, the main such site in the region, closed in September under pressure from residents, who said the facility was full and complained that toxic chemical waste was being dumped there, even though the site is only meant for household waste.

Municipalities in the province have since refused to gather waste, calling on the state to find sustainable solutions.

Authorities decided on Monday to re-open the site, sparking a new round of protests in Aguereb.

Tunisia has long suffered difficulties dealing with the estimated 2.5 million tonnes of rubbish produced every year, dumping the vast majority in landfills and recycling only a very limited amount.