African Youths Are Waking Up 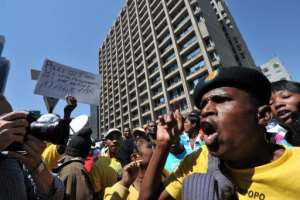 The Military in South Sudan is back after Demonstrators drove out the former Dictator. They are not comfortable sharing Power with “bloody” civilians. They have forced these same Demonstrators out again but this time against Military takeover. South Sudan went through hell before they finally separated from North Sudan to become a new Nation. Yet, like the Somali, they fought within. Then, for oil and now against the Military that replaced the Dictator.

The Arab Spring, Black Lives Matter and others are taking the fight for their Freedom headon. In many countries in Europe, Asia and America, Youths have demonstrated the penchant for Freedom of views and ideas that can provide for the future that belongs to them instead of being wasted by old politicians struggling to stay alive in their old age. They do not want to retire for the fear of trials for their evil deeds.

There are many more silent majority of our Youths that can no longer sit idle. In Nigeria, they came out last year for #ENDSARS protests and some of them lost their lives to cowards that cannot protect their citizens from terrorists, bandits and kidnappers. Other Youths have been labeled with too many unpatriotic names for resting on the laurels of Nkrumah, Zik, Awo, Balewa and other builders of African countries, without achieving anything on their own.

The Anniversary of #ENDSARS demonstrated the Will of our Youths given a bad name so that they can hang them like a dog. The Demonstrators had shocked these Oppressors to their boots, yet they say these old soldiers never die. Despite the senior Military Commander at the Tribunal boosting he would do the same thing all over again, they are claiming nobody died during an ignoble mission to contain the Protesters at Lekki last year.

We treat our Youths worse than they treat migrants trying to cross the desert and sea. Recently, the Police/Soldiers contingent saw a man dressed in lion's skin Traditional Attire with charms and they went berserk. They subjected him to assaltative search but the same Military run from a Fulani man dressed with a dagger around his shoulder holding an AK47. You see, "dem nor craze" when it comes to Fulani threatening their dear lives.

They would rather charge at unarmed Demonstrators. They prefer fighting Lekki Protesters as an excuse to dodge duties in Sambisa Forest. The Army and Police made threats to prevent the Youths from carrying out peaceful demonstrations after planting reactionaries within to paint them as troublemakers. They are known inside the Country to hire thugs by busload to maim Demonstrators and pay nonNigerians to support their atrocities at home, overseas.

Unfortunately, the Military overstayed their welcome and became worse than the civilian leaders they vowed to purge of corruption from not only in Sudan but in Nigeria and Ghana. Those who hailed the coming of Rawlings and Nzeogwu became disillusioned when military men started turning to civilian (militrician) Presidents. These are the leaders that have been on welfare all their lives that labeled young people lazy Youths.

They take for granted what past Freedom Fighters achieved in blood and sweat to propel most deprived Africans forward after Independence. These successors got most of their education on generous scholarships and military training that were supposed to defend the actualization of people. However, they became leaders only to accumulate riches and defend their own pockets. Indeed, the first coming of the Military was supposed to correct anomalies.

What makes some Youths think you can survive on the legacies of past African leaders without making your contributions at home? Most of these leaders have no individual accomplishments. They refuse to work as hard as the old Youth activists that got them Independence. Some of today’s Youths learned laziness from the new leaders calling them lazy Youths. These are the reasons our Youths submit to seek asylum outside Africa.

It is the 21st Century and inhuman behavior in the days of survival of the fittest persist. Those fleeing their homeland at the risk of their lives across the desert and sea know full well they would be treated worse in strange places. But some want to believe lies that are being sold to them or prefer the ignoble treatment outside, than face their oppressors at home and fight. This was how slaves resigned to their faith in ancient times.

There was a conference a few years ago in a foreign country. Some African scholars were represented and they made good contributions. One of the African contributors got up and made a passionate plea to the Sponsors not to give any assistance to the scholars unless it is specifically designated for implementation in Africa. This moving plea resulted in silence for a while until others spoke up.

African scholars do not come back home, he pleaded. Most of those getting African and foreign scholarships never return home, he cried. The amount of resources spent on highly qualified African professionals go to waste as far as African countries are concerned. When some of them go back, they only do so for vacations. A few even lie and exaggerate their success overseas to spite those that never left, tempting them to leave Africa by any means.

One of the participants at the conference objected. She claimed that she has trained several professionals in different fields from the money she made abroad. Her loss was a multiple gain to her country by the number of professionals she trained back home in her country. In that case, someone responded, we should all leave Africa and train non-humans to develop Africa. Maybe we should depend on foreigners for our salvation in Africa since our trained, skilled and talented Africans cannot stay at home.

Another speaker made a distinction between foreign and local trained scholars. It is the locally trained scholars that do not go back home. Until recently, most of the Africans trained in foreign universities go back home to make their contributions. Most of the Activists that became politicians and skilled professionals went back to Africa to fight for Independence. They were the teachers, trainers, doctors, lawyers, engineers and other Africans that never got scholarships from home. Yet, they went back to Africa.

Nevertheless, many African professionals today have rejected their obligations to African countries. Without any conscience, they desert their countries even when they become underemployed overseas claiming it is a sacrifice to give their children colonial education that always looks down on Africa. These children remain at the bottom of the social class like their parents, no matter their accomplishments on the job.