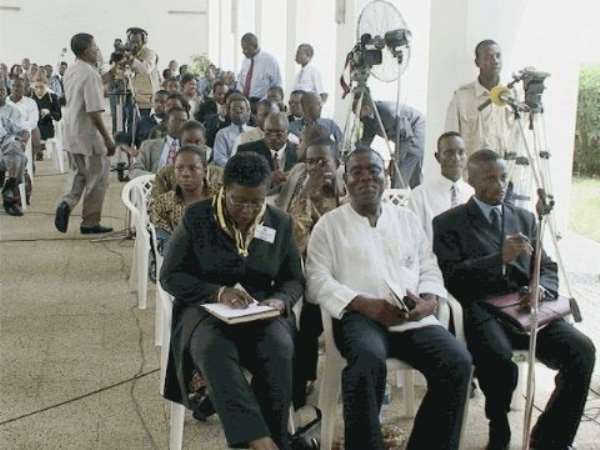 The decision last week by the Ethics Committee of the Ghana Journalists Association to let Mr. Harruna Attah, editor of the Accra Daily Mail off the hook with a soaped-up excuse of a statement must rank as the biggest joke of the year.

As its name denotes, the Ethics Committee of the Ghana Journalists Association was set up to ensure that journalists who are members of the association subscribe to an ethical standard of behavior in their practice of journalism. Although we on The Searchlight abhor unnecessary pedantry, we would at this stage like to quote the definition of the word ‘ethic’ as given by the Oxford Advanced Learner’s Dictionary.

We deem it necessary to point out that if that definition is anywhere near accurate, then the Ethics Committee failed woefully to live up to its mandate. The Oxford Advanced Learner’s Dictionary defines ‘ethic’ thus-“(1) system of moral principles, rules of conduct…(2) Science that deals with morals…” As the name denotes, the Ethics Committee of the Ghana Journalists Association is there to see to it that journalists in Ghana conduct themselves in an ethical manner. If that is so, one then wonders by what yardstick the Ethics Committee measured the criminal misuse of the pen by the Accra Daily Mail on Monday, October 7, before the committee came out with that insipid bit it calls a statement!

We must register our huge disappointment with the Ethics Committee! From their so-called ‘statement’, it becomes clear that they allowed Mr. Harruna Attah to waltz into the meeting to dictate his terms, to manipulate them, and to waltz out of there smelling of roses, leaving the practice of journalism in Ghana smelling like one huge heap of manure! The Ethics Committee is peopled by men and women who are illustrious and overqualified by whatever definition and standard one sets for personal achievement and academic brilliance.

It is this that makes it astounding that the Ethics Committee set out on its mission with the false sense that in order to come with a conclusion on whether or not the garbage the Accra Daily Mail published on October 7, 2002 is ethical, they had to question Mr. Harruna Attah about who the journalist rumored to have collected $125,000 was. In our opinion what they had to establish was whether or not the ‘news item’ as carried by the Accra Daily Mail was ethical or not. Was it ethical to publish the story without naming the person accused?

If he did not, was his failure ethical? And since Mr. Harruna Attah admits freely that his investigations are on-going, was it ethical for him to come out with a ‘story’ which he knows to be half investigated, and according to his newspaper still very much at the rumor stage? These, and many more, are the issues one had hoped that the Ethics Committee would have gone out there to establish. Instead of the bromide of a statement the Ethics Committee has fed the public, what they should tell the public is whether or not the conduct of the Accra Daily Mail was professional and ethical. Institutions are always set up for a purpose.

Individuals who are appointed to serve in institutions have a sacred duty to uphold and defend the sanctity and integrity of those institutions, because when they fail, they bring the entire reputation of the institution they have been appointed to serve on into disrepute. People who do not have the stomach for the pains, sacrifices and ramifications of certain appointments have no business accepting those positions. As The Searchlight established abundantly last week in our edition Volume One, Number 43, the practice of journalism in Ghana is on a long downward spiral.

Unless journalists resolve to act in an ethical manner, they will not only expose themselves to public opprobrium and ridicule, they may very well, because of the nature of their trade, send this nation into the abyss of self-immolation. Ghana stands at the crossroads. At this very moment in time the nation is about to embark on a journey of painful soul-searching in the guise of national reconciliation that can tear the nation apart at the seams. We have on our hands a very explosive situation in Yendi, which calls for truthful yet tactful journalism.

People who should know have identified over a hundred flashpoints where major trouble can explode all over the nation. Our security services are ill equipped to handle adequately even one major outbreak of violence.

All it would take to ignite the cauldron that is this nation is one wrong piece of journalism. Like publishing explosive rumors as banner headline news. Rumors are rumors. They exist about each and every individual. There are rumors about people in high places in all sectors of the society, including journalism. One hears rumors about sex addicts, drug users, bribe-takers, blackmailers and what have you. But until these rumors come accompanied by factual, provable evidence, they remain what they are, rumors, and should be treated with the contempt that they deserve.

No self-respecting journalist will ever publish a rumor on his front page. Due to the nature of their trade journalists serve an especially crucial function, and few institutions exist to ensure that professionalism is maintained in the profession. Only few institutions like the National Media Commission, the Ethics Committee of the Ghana Journalists Association, the Judiciary and the media itself can ensure that professionalism is upheld in journalism.

That it is why it becomes especially hazardous if the few institutions in place to check upon the powers of the media fail to exercise their duties properly. By its inability to castigate and bring into public censure the Accra Daily Mail for its criminal misuse of the journalistic license, the Ethics Committee is allowing a very dangerous door to be opened.

What if, tomorrow, some newspaper decides to publish a rumor saying that a very senior, high-ranking law officer, not necessarily a police officer, but on the government payroll, who is close to the top of the government, is a marijuana addict or a bribe taker, or closet homosexual or a blackmailer, or whatever, and people start pointing fingers?

What if, tomorrow, some newspaper published a rumor, heard on the grapevine, not cross-checked, verified or investigated in any way, accusing President Kufuor of selling of government posts in exchange for political support? What if, tomorrow, some newspaper published rumors that a very high -ranking chief in Ghana is HIV positive but is still engaged in womanizing? What if, what if, what if…

The above scenarios, and many more as horrifying can be the direct consequences of the bit of pea-brained (and some would term malicious) bit of work the Accra Daily Mail launched on October 7, and it ought to be nipped in the bud as quickly as humanly possible.

The failure of the Ethics Committee to do this duty has let out a huge monster onto the media scene in Ghana called ‘rumor’. As Alfred Ogbamey of the National Concord has argued on both radio and TV, “it is journalism that opens the Pandora’s box for all sorts of journalism’ based on unverified rumors. And unless this style of journalism is cornered, slaughtered with no quarter given or asked for, and subsequently buried, this monster will grow, prosper, and bring down journalism in Ghana in a burning furnace of shame and ignominy. Ghanaians will be lucky if this fire does not consume them as a backlash.

We on The Searchlight call upon the members of the Ethers Committee to voluntarily resign their positions for their monumental failure in their handling of the Accra Daily Mail issue, which comes as a shameful penultimate to their unsatisfactory handling of issues like the Kofi Coomson versus Elvis Aryee affair, the Jojo Bruce Quansah C500, 000 allegation, and others. It is time for them to go, for qualified in their various fields of endeavor they may be with media personnel they obviously have a lion by the tail, and they have no idea how to handle it.

Additionally, we call on the executive of the Ghana Journalists Association to disband this Ethics Committee in favor of a new one; to save whatever little credibility the organ enjoys.

Ken Kuranchie (editor of The Searchlight)