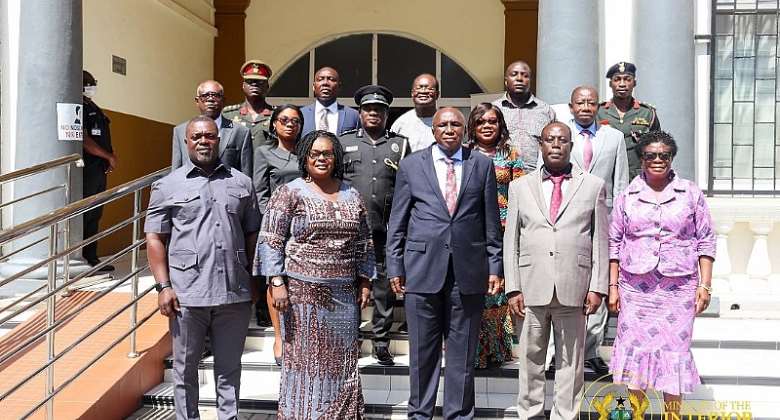 The Minister for the Interior, Hon. Ambrose Dery has emphasised that the fight against the proliferation of small arms and light weapons is a top priority of the government to ensure peace and security in the country.

The Minister, who was speaking at the inauguration of the Governing Board of the National Commission on Small Arms and Light Weapons at the Ministry of the Interior in Accra, charged the Governing Board to put in place robust measures to effectively control the illicit trade, manufacture, and flow of small arms and light weapons into the country.

He said illicit small arms and light weapons situation calls for enhanced and sustainable preventive approaches in addition to raising the alertness and the capacities of the security agencies especially at entry points into the country.

Hon. Ambrose Dery noted that the Commission’s activities are critical and should complement the activities and operations of the security agencies in sustaining peace and security.

“You need to raise awareness among the populace especially Border Communities and be vigilant in gathering information on illicit arms trade, manufacture, and smuggling to enable the Law Enforcement Agencies act swiftly,” he added.

According to the Minister, proactive actions and efforts must be taken to deepen the stability and protect society against tensions and conflicts escalating into armed violence by limiting access to and abuse of Small Arms and Light Weapons by unauthorised persons.

He commended the board members on their appointments and assured them of his support. He added that his doors are open for ideas and suggestions on how to strengthen the country’s gun control and monitoring systems to effectively deal with the recent emerging trends in organized crime and its associated demands for small arms and light weapons.