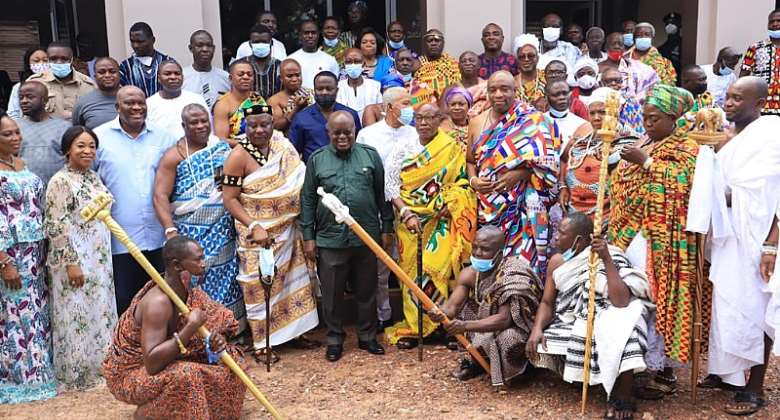 Chiefs in the Greater Accra region have added their voice to the campaign against the legalisation of Lesbian, Gay, Bisexual, Transgender, and Queer (LGBTQ) practice in the country.

Vice President of the Greater Accra Regional House of Chiefs, Nii Odaifio Wulentse III made this known when President Akufo-Addo called on them as part of his three day tour of the national capital, Accra.

In a speech, he said “the traditional authorities in the Greater Accra region wants to use this opportunity to voice out our displeasure on the issue of accepting people indulging in same sex marriage.”

As fathers of the land, they said “we have monitored the social and public discourse and we want to add our voice that this practice will not be entertained or tolerated among our people”, to a rapturous applause from his colleague chiefs.

They therefore charged the President and his government to do the needful to save humanity by kicking against anything that will legalise the practice.

President Akufo-Addo was hopeful that Parliament which is now handling the issue of LGBTQ+ will deal with it in a satisfactory way.

Whilst he admitted that there are lots of requests for assistance to help construct new traditional council buildings across the country, President Akufo-Addo assured the Ga-Dangme chiefs that he will try his best to support him in whatever way he can.

He also promised to see to the completion of construction works on the Eastern Corrdior road before the end of his term of office.

He later inspected ongoing works on the Accra Intelligent Traffic Management project and the phase one and two of the La Beach Road completion at the Nungua old barrier being funded by Ghana Development Bank for Cooperation and the Government of Ghana.

Work on the project commenced in June 2020 and expected to be completed in November 2022.

Galamsey fight: Godfathers have disowned their child but wil...
46 minutes ago