The Three Stages Of Corruption: How We Are All Part Of The Problem 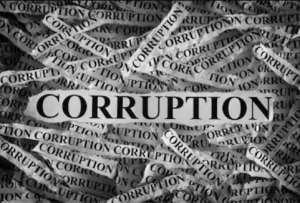 Some weeks ago, I was in a taxi traveling from one town to another here in Ghana. Beside the fact that the driver was speeding a little over the optimal speed limit, I was terribly annoyed for one other reason. Obvious for selfish reasons, the driver had packed three grown-up women and an adolescent child at the back seats of the taxi that ideally should take two passengers. What was more? Right there in the front seat, I was folding myself into the thinnest possible shape to accommodate a lady whom the driver pleaded will alight just a few distance away. Being lenient enough, I obliged, but was soon to realize, regrettably, I was deceived as the lady parasited my seat all the way to the final destination.

Let’s pretend that all that happened above was not newsworthy as I believe many Ghanaians go through similar ordeals in their daily hassle for transportation from one point to another. One incident which is equally a common occurrence, though rather tragic and deserving of outright condemnation, which occurred during the journey is what I would retell in the next few sentences. After a while in the journey, I noticed the driver brought out what appeared to be a passport holder in which, upon his opening, I realized was five Ghana cedis. Not long afterwards, we were pulled over by the police. I perceived we (and by “we” I mean the driver) were definitely in trouble obviously for tucking six grown-ups and a child into a small taxi, not to mention the load in the car boot which was almost pouring out.

Much to my surprise, the driver decelerated with a smile and shouted something to one of the police men that indicated some kind of acquaintance between the two. As he slipped out of the car to meet the police man who was approaching, I noticed he had taken the passport holder along. Curious about what would happen next, I fixed my eyes on the side mirror through which I could see both the police man and the driver. In a rather dramatic and wordless scene, the driver swiftly opened the passport holder and the police man smartly reached for the money in a way that was almost impossible to notice by a stander-by. And that was it; end of interrogation.

Now I won’t pretend I have never seen police men taking “tokens” from drivers on the way side. This happens so often that it is no news to the ordinary Ghanaian anymore. What was peculiar to me about this incident was the rapport with which it happened. From what had just happened, I could hypothesize that the taxi driver, who was a regular user of the road, was well-known by the police men who were equally regularly based at the same part of the road. I came to the conclusion that these incidences of overloading by the driver was a habitual act as was his pulling over by the police and the resultant paying out of his way with as little as five Ghana cedis. The gravest part of all this was the fact that it was a routine – that it was neither happening for the first nor last time – and this, to me, is a red flag that corruption in this country is reaching a terminal stage, if it already has not. It is as uncommon these days to find drivers adamantly refuse to succumb to the corrupt tendencies of police men as it is to find police men resist moves by corrupt drivers to pay their way out of non-compliance. But this is not just about police men and drivers – as you would find out quite soon – it is about the future of the entire nation of Ghana.

At this juncture I would like to discuss what I call the three stages of corruption in Ghana, namely: tertiary, secondary and primary stages.

Let us start with the tertiary stage of corruption. This stage of corruption is what I believe is practiced by the “elite” class of people who are at the apex of the socio-economic ladder. This group consists largely of politicians (presidents, ministers of state, members of parliament etc), CEOs of public organizations/institutions and large private corporations and non-public individuals of influence. Corruption at any of these levels directly affects a large group of people negatively so it is not surprising that when corruption is mentioned anywhere, everyone thinks of this group of people first, if not solely.

The second stage of corruption is what I call the secondary stage. In this stage we find mostly individuals belonging to the middle class or what I would term the lower upper and the upper lower classes. These individuals wield significant amount of influence and power but not as much as those stated above. This is where we categorize corrupt officials holding top positions in fairly large private and public organizations, budding politicians and generally any corrupt individual that, to some extent, wields power and authority but is still answerable to the head of his/her organization or institution. This is where I would place corrupt lecturers, medical doctors, lawyers, engineers, businessmen and the list goes on and on.

The last stage is the primary stage of corruption. This stage is where everybody else not in the aforementioned categories belong. This stage, though rarely talked about, is, in my opinion, the most dangerous of all. It is the most dangerous because of two reasons: firstly, it consists of the overwhelming majority of people. Secondly, it is always the foundation on which all the other stages are built. Let me explain this with a scenario. Let’s say Honorable X is a minister of state who is known as corrupt. Honorable X assumed office less than four years ago so it very unlikely he suddenly became corrupt within this period. A little dig into Honorable X’s past reveals he was a lecturer at a certain university before he resigned to pursue his political career. After consulting some of Hon X’s former students, it was told that he was once implicated in a sex-for-grades scandal and selling of exam questions though but matter died off silently to the surprise of many. Further dig into his past reveals he was Students’ Representative Council (SRC) president in his university days and some of his mates attest there was speculated embezzlement of funds during his tenure of office. So you see where it all started?

The primary stage is where all forms of corruption begins but, unfortunately, it is the stage where it is easily disregarded, if not permitted. Whenever you complain that any politician is corrupt, just remember that no politician or holder of a public office was made corrupt by their office or position. They were corrupt all the while, only waiting for an opportunity to reveal the true shape of their frame. I shudder to say this but almost everybody in Ghana is corrupt. We are all corrupt in little ways we do not consider as corruption. I can say this confidently because if the youth see nothing wrong with paying “an agent” to have their national service postings changed to where they want, I do not think we are as uncorrupt as we claim to be, and hence not very much different from the MP stealing government money. We are all implicated in the scandal of corruption, and if we must win this battle, we have to first reassess ourselves and those around us and change what is changeable before it grows out of control.