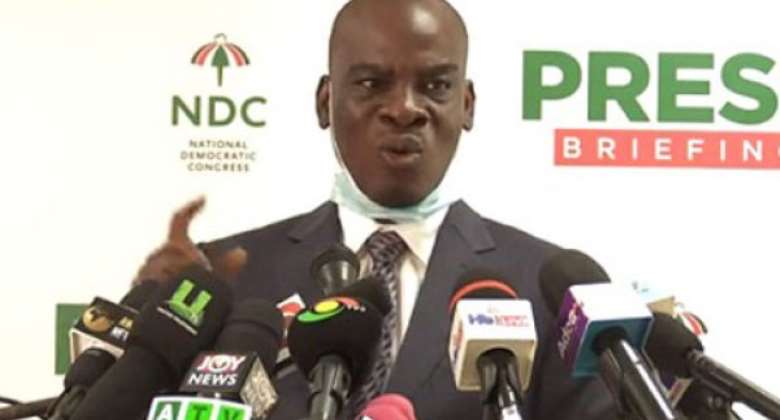 The NDC Minority Caucus in Parliament has affirmed its resolute support for the introduction of the anti-Lesbian, Gay, Bisexual, Transgender and Queer (LGBTQ) Bill to Parliament.

“We the NDC Minority Caucus remain resolute in our position to the introduction, formalization and legalization of the anti LGBTQ Bill in its entirety, in whatever shape or form or character.

“We stand unitedly opposed to it.”

Mr Iddrisu stated the Minority's position at a news conference, at the Parliament House, in Accra on Friday.

The Anti-LGBTQ Bill is currently before Parliament, and expected to attract a wide debate and discussions, after the House, currently on recess, resumes on October 26, 2021.

The proposed legislation generated a lot of interest among the Ghanaian population, with 18 persons from academia and Civil Society Organisations (CSOs) the Bill, and reasoning that its current form violates the rights of LGBTQ persons.

So far, over 100 memoranda from individuals, groups and religious organizations on the Bill have been submitted to Parliament.

Mr Iddrisu commended Mr Sam George, MP for Ningo Prampram Constituency, the lead sponsor of the bill, and other Members of Parliament (MPs) including; Mr Nelson Dafeamekpor, Mr Emmanuel Kwasi Bedzrah, Rev. John Ntim Fordjour, Mrs Dela Sowah, Ms Rita Odoley Sowah and Mr Ahassan Suhyini for the courage and leadership they have provided so far in demonstrating that MPs “do not represent themselves but the electorate and exercise any mandate in accord with the aspirations and wishes of the people.”

He said MPs, as the representatives of the people, have an obligation to protect the moral fiber of the Ghanaian society, promote the cohesion and unity of the country and more importantly, to preserve the country's time-tested practices and believes which have kept the people together as one country.

Mr Iddrisu also reminded individuals and groups who claim LGBTQ as human rights that in 1960 when section 104 of the Criminal Offences Act (1960) was passed, there were not such rights as LGBTQ rights.

He said section 104 of the Criminal Offences, 1960 (Act 29) specifically states that any person involved in having unnatural canal knowledge with another person would have to be punished.

He said there were people overstretching those rights to “absurdity” and questioned those promoting the LGBTQ rights.

“Can these rights can be placed under any of the United Nations such as what the UN Charter adopted in 1945, Universal Declaration of Human Rights adopted in 1948, International Covenant on Economic and Social Rights, entered into in 1976 or under the International Convention Civil and Politics Rights implemented in 1976?, Mr Iddrisu asked.

He said the Minority in Parliament would insist on “clause by clause” vote on every word, accompanying sentence and Memorandum to any provision in the Bill.

“We are saying when it comes to the promotion of Proper Human Sexual Rights and Ghanaian Family Values Bill 2021…, we'll do what is legally needful within the 1992 Constitution,” the Minority Leader emphasized, adding, “we want every Member of Parliament (not just one side), to stand to be counted as reflecting the aspirations of the Ghanaian people.”