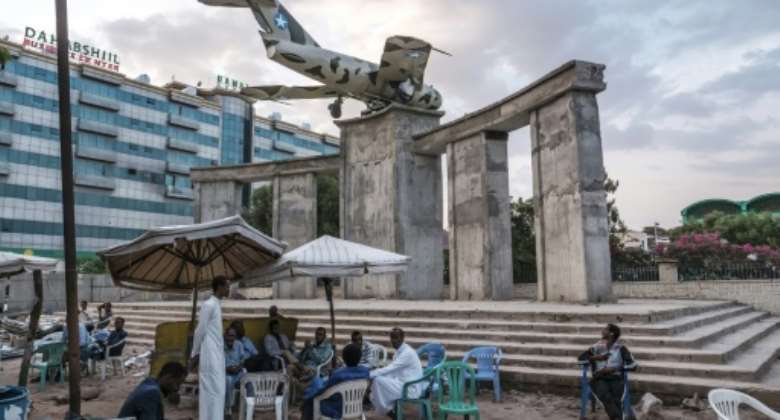 A warplane relic serves as a monument to the armed struggle for independence in Somaliland. By EDUARDO SOTERAS (AFP)

Beneath the defiant flag of their self-declared republic, young Somalilanders considered life as fresh university graduates in their unrecognised homeland -- a country in name only, proud but alone in the Horn of Africa.

These students were not yet born when Somaliland declared independence from Somalia in 1991, an act still unrecognised by the international community that has left the breakaway region poor and isolated.

Lack of recognition has made life even harder in one of the world's most impoverished regions, government officials say, frustrating access to foreign loans, aid and investment.

Somaliland's 4.5 million people cannot travel easily, as their passports are not widely accepted.

For its youth -- who represent three-quarters of Somalilanders -- jobs are scarce, even for the best and brightest.

Somaliland lies on the Gulf of Aden, bordered by Djibouti, Ethiopia and the rest of Somalia. By (AFP/File)

"The need is there, but there are no opportunities," said Saeed Salad Ahmed, a 26-year-old in black robes and tasselled hat, after graduating from the University of Hargeisa.

"I remain hopeful. We are developing, and we will continue becoming a better country, even if unemployment is a problem."

For 30 years, Somaliland has tried unsuccessfully to convince the world of its case for statehood, holding democratic elections and avoiding the anarchy that engulfed the rest of Somalia.

Only Taiwan has extended formal recognition, although a few other African and European countries have opened diplomatic missions in Hargeisa.

In the ramshackle capital, wads of Somaliland currency swap hands on the potholed streets, as police wearing the national emblem direct cars pressed with Somaliland plates.

Most students graduating from the University of Hargeisa were not yet born when Somaliland declared independence from Somalia in 1991. By EDUARDO SOTERAS (AFP)

Teenagers snap selfies with an "I (Heart) Somaliland" monument not far from the national war memorial, where a warplane relic stands as a testament to the independence struggle.

Along its disputed border with Somalia, and frontiers with Djibouti and Ethiopia, the national army keeps watch. A coastguard patrols waters off the Gulf of Aden, on busy global shipping lanes.

It elects its own leaders, who rule under a constitution, checked by the courts.

But despite the trappings of a state, to the rest of the world Somaliland is a part of Somalia, even if Mogadishu exerts no real authority over the region.

Hargeisa is the dusty capital of the self-declared state of Somaliland. By EDUARDO SOTERAS (AFP)

Being treated as one country deeply offends many Somalilanders.

Thousands died in a brutal civil war between the neighbours that left Hargeisa so destroyed it was dubbed "the Dresden of Africa".

The early post-war government was politically cut off and without foreign help, relying instead on its diaspora to rebuild.

Even today, inflows from abroad dwarf Somaliland's meagre annual budget of $339 million, and the pride of standing alone is strong.

"It is a country that was built by Somalilanders, for Somalilanders," said Shukri Haji Ismail, minister for environment and rural development.

But Hargeisa Cultural Centre director Jama Musse Jama said the fledgling state was "hitting the ceiling" and without recognition there were limits on what more could be done.

A street stall displays merchandise depicting the Somaliland flag in the city of Hargeisa. By EDUARDO SOTERAS (AFP)

"Somaliland ticked every single question that has been asked by the international community to be a recognised state."

Most Somalilanders are under 30 and have never known anything but self rule, making any chance of reunification with Somalia unthinkable.

Thousands graduate from Somaliland's universities every year with no one to hire them, officials say. Brain drain is a problem, with students leaving if they can for opportunities abroad.

"They say... 'I need much more than peace, I need hope, I need employment, I need development'," Musse said of younger Somalilanders.

Government officials acknowledge high rates of youth unemployment, but blame Somalia and the lack of recognition for holding it back.

They prefer to showcase its successes -- most notably its relative safety, and peaceful elections in May that delivered an opposition victory.

Somaliland's declaration of independence is not recognised by the international community. By EDUARDO SOTERAS (AFP)

The vote was declared credible, though it was years overdue, and failed to elevate a single woman to parliament.

Somalia, meanwhile, has failed to deliver elections or manage the process without violence, despite billions in foreign aid, a point not lost on Somalilanders.

Bashir Goth, who represents Hargeisa in Washington, said the West was reluctant to recognise Somaliland until an African nation did first, but support was growing.

He said the shadow of Eritrea and South Sudan -- the last two African nations to achieve statehood, which turned to repression and bloodshed -- still hung unfairly over Somaliland.

"We have a compelling story actually, and I think it's a matter of time."

A new graduate stands outside the University of Hargeisa proudly holding her degree certificate. By EDUARDO SOTERAS (AFP)

The government hopes a $442 million agreement by a Dubai-based company to develop Berbera port will lure other investors, and create much-needed jobs.

In Hargeisa, hanging out with friends at a bustling evening market, 23-year-old Ihsan Ahmed Abdullahi was optimistic.

"Our country is slowly, but surely, evolving... nowadays we see women in different senior government positions," she said.

"I am hopeful that one day I will get a job and contribute to building Somaliland."