In the shadows: The general named in Guinea-Bissau drug ring 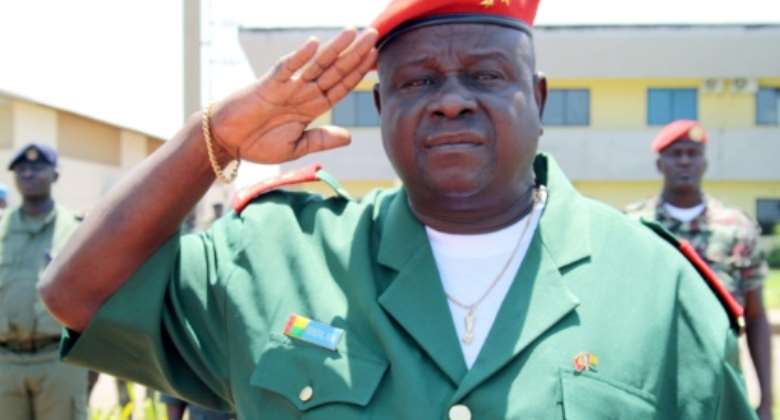 Guinea-Bissau's then army chief of staff General Antonio Indjai in May 2014. By STR (AFP/File)

Guinea-Bissau's General Antonio Indjai, who has been dubbed the figurehead of a so-called "cocaine coup" in 2012, lives in the shadows in defiance of a US bounty on his head.

The former head of the armed forces was an all-powerful personality in the West African country before he retired to his farm in 2014, where he has lived quietly since.

But Indjai, 66, is wanted in the United States for allegedly conspiring to strike a cocaine-for-weapons deal with drug enforcement agents posing as members of Colombia's FARC guerrilla group.

In August, the US State Department described Indjai as "one of the most powerful destabilising figures in Guinea-Bissau" and offered a $5 million reward for information leading to his capture.

"The general doesn't care about that," one of his relatives, who requested anonymity, told AFP.

"He works on his plantation and comes to see his family in (the capital) Bissau every week," the relative said.

By local standards, the size of the proposed reward is staggering.

Guinea-Bissau is one of the poorest countries in the world, and has had a long history of military coups and political assassinations since its independence from Portugal in 1974.

Poverty, chaotic administration and a porous coastline have made the country fertile ground for Latin American cocaine traffickers.

Map showing key cocaine flows in West Africa and a selection of seizures between 2019 and January 2021. By ElÃ©onore HUGHES (AFP)

The government has refused to extradite Indjai, whom some experts see as continuing to wield influence behind the scenes.

After years in the shadows, the general appeared in a photo that surfaced last year standing alongside Prime Minister Nuno Gomes Nabiam and President Umaro Sissoco Embalo, in what was viewed as a public display of the military's support for the government.

Indjai joined an anti-colonial guerrilla movement while still in his teens, then enlisted in the army after independence.

He went on to distinguish himself in a 2006 campaign against separatist rebels from neighbouring Senegal who had spilled across the border.

But Indjai made his first big move in 2010, when soldiers loyal to him arrested the then army chief of staff and he took control of the armed forces himself.

Two years later, Indjai led soldiers in a putsch during a presidential election, sending the leading candidate into exile.

The putsch was dubbed a "cocaine coup" -- thought to have been staged in part to seize control of the lucrative drug trade.

Indjai had long been in the sights of the US Drug Enforcement Administration (DEA). But shortly after the coup, in May 2012, DEA informants posing as members of the Revolutionary Armed Forces of Colombia (FARC) reported that the general had agreed a deal with them.

According to an indictment filed in New York in 2013, Indjai arranged to store several tonnes of FARC-owned cocaine in Guinea-Bissau and then re-export it.

Guinea-Bissau's military was also to supply the FARC with weapons -- including surface-to-air missiles -- as part of the deal.

The general is now wanted in the United States on several charges, including "narco-terrorism conspiracy" and conspiracy to import cocaine.

"Indjai remains at large as a fugitive," a US State Department spokesperson told AFP.

Diplomatic pressure may have forced the government's hand, suggested researcher Maurice Toupane of the Institute for Security Research in Senegal's capital Dakar, pointing to international concerns over instability in Guinea-Bissau.

One Bissau-based trafficking expert said Indjai knew that if he kept a low profile "nothing would happen to him".

Some experts view the stance as prudent. "It could be a risk for Umaro Embalo to try to hand over Indjai, knowing his influence within the army," Toupane said.

Embalo himself took office last year after a disputed election, in which the military's hand remains unclear.

The army occupied several of the country's institutions, including the national assembly, after Embalo ignored opposition protests of fraud and declared himself president.

"There is no evidence to link Umaro Sissoco Embalo to drug trafficking, but he is surrounded by some known actors in this area," he said.