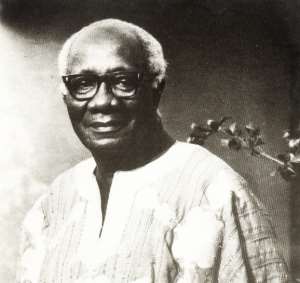 10th October 2021 marks the 111th Anniversary of the Birth of William Ofori Atta (Paa Willie), a member of the "Big Six" who fought for the emancipation of Ghana from colonial rule.

Paa Willie was an Economist, a Teacher, a Lawyer, a Politician, an Evangelist and a Statesman. He was as well a Member of Parliament in the pre-independence parliament from 1951-1954 and also the second Republican parliament from 1969-1972. He served as the chairman of Cocoa Marketing Board which is now COCOBOD from 1966 to 1968. During the Second Republic, he served as the Minister of Education, Culture and Sports from 1969-1971 and also the Minister of Foreign Affairs from 1971-1972. During the Third Republic, he was the Chairman of the Council of State from 1979-1981. During his political career he was imprisoned five times: the first was during the fight for independence in the year 1948. He was imprisoned four times in post-independence Ghana in his quest for respect for human rights and democratic governance. He was imprisoned two times during the first republic under Kwame Nkrumah and the other two, 1972 and 1978 under the military regime of General Kutu Acheampong.

Paa Willie influenced a lot of people positively during his lifetime which included people like Mr R.R Amponsah, Dr Jones Ofori-Atta, Prof Adu Boahen, Mr KB Asante (all of blessed memory), Mr Sam Okudzeto, Dr Obed Asamoah, Prof Stephen Adei and Mr Tsatsu Tsikata. It was therefore not surprising that Mr. Tsatsu Tsikata had high praise for him on a Citi TV programme in July 2021. On that programme, Mr. Tsikata extolled the servant leadership virtue of Paa Willie and revealed that he was one of the people who influenced him to read law at the University of Ghana. According to Mr. Tsikata, Paa Willie often came to preach to students of the University Christian Fellowship and that the relationship which developed between them at the time made a great impact on his life and career choice. He said that although Paa Willie was known to be a great orator, he often spoke simply and brought things down to the level of young people during his interactions with them.

As a parliamentarian, it was said that whenever Paa Willie rose up to speak, everyone sat up to listen. He was a humour and engaging storyteller and he used anecdotes to elucidate his submissions. This is the calibre of statesman we are celebrating at this time even though he passed into glory thirty-three years ago on 14th July 1988.

Paa Willie practiced his politics with integrity and decorum. Having won elections and lost some, he understood the vicissitudes of political life and especially that which characterises Ghanaian politics. One of the popular stories of Paa Willie is the "Ofei Doodu" narrative or parable which he told to illustrate this. It was an incident during a very crucial match at the Accra Sports Stadium between the two famous rival clubs in Ghana. Mr. Ofei Doodu of the Accra Hearts of Oak fame and a national football hero at the time is said to have received a near perfect pass in the 18-yard box (penalty area). He delayed and fumbled and was eventually dispossessed of the ball. He thus wasted what appeared to have been his club's easy chance of taking the lead.

An enthusiastic supporter of the club at once jumped to his feet and shouted in utter disappointment and annoyance, "Oh Ofei le ele nokonoko, nkee ele nokonoko kwalaa!!! meaning 'as for Ofei Doodu, he is useless. I say he is absolutely useless'.

However, while still on his feet and before he could finish repeating his condemnation, Ofei had scored a goal from a rather difficult position after dribbling past two opponents in a row.

The same supporter in the same breath, shouted for joy and exclaimed, "Be nkee nye Ofei le ehe ye gbeye; da ni ebaa wo go le, ebaa jie ame dan!!!". That is: 'didn't I tell you, Ofei is a wonderful player. Before he scores he must show off by dribbling past an opponent or two'.

Paa told this story when he was interrogated at the beginning of the 31st December Revolution while he was being held for questioning as Chairman of the Council of State in a regime that had just been overthrown.. In fact, on the second day of his interrogation he had to repeat it at the request of his interrogator.

It was by way of warning those who had suddenly found themselves in positions of leadership and power about the possible sycophancy and unpredictable nature of the Ghanaian and by extension all human beings.

William Ofori Atta will forever be remembered as a patriot par excellence, a true servant leader and a president Ghana never had who made great sacrifices for the independence of our dear nation. He made a great deal of sacrifice for the consolidation of democratic principles in the governance of Ghana which have now become the norm since January 1993.

He remains the only member of the Big Six who the nation is yet to accord any remarkable honour to show appreciation for his contributions to building an independent and democratic Ghana.