Uganda's 'green money' grasshoppers under the lens, and under threat 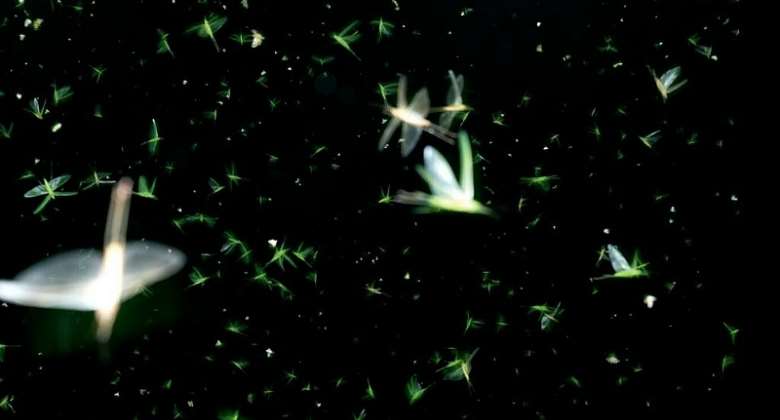 Grasshopper hunting provides Ugandans with cheap nutritious food and sometimes big money, but insect numbers are dropping due to deforestation and climate change. An Italian photographer has captured the joys and perils of trapping “nsenene” in a book prefaced by Bobi Wine.

“As kids, we used to catch the insects and fry them up for our morning or evening tea. It wasn't until I reached the age of fifteen or sixteen that I realised this was a business opportunity,” writes musician turned politician Bobi Wine in the preface to the book Nsenene by Michele Sibiloni.

Wine grew up in the ghettos of Kampala and like many youngsters would go out twice a year at the end of the rainy season to trap the long-horned grasshoppers, known as nsenene in the Luganda language. The kids filled their bellies, and ultimately their pockets.

“I recorded my first single – and made my first million – with grasshopper money” Bobi Wine writes. "It paid my brother's school fees and the family's bills, too. That's why I revere these insects: grasshoppers changed my life.”

Nsenene migrate en masse just twice a year, after the rainy seasons in November and May. The swarms are around for only a few days and it's a time of intense activity.

The easiest method is to go to banana or maize plantations and shake the trees or bushes.

But to make real money, hunters lay elaborate traps involving iron sheets, oil drums, transformers and a special fluorescent lightbulb which produces a stronger than usual light to attract and disorientate the insects.

Italian photographer Michele Sibiloni was drawn by the lights one night in 2011 when he was crossing the Ugandan town of Masaka near the Congolese border by bus.

“The town was completely lit and it was incredible,” he tells RFI. “I didn't know what the lights were.”

In 2015 he began tracking the insect around Masaka, known locally as "Nsenene Republic" since the tradition began there some four decades ago. He went on to photograph hunting expeditions in a number of towns in central and western Uganda, meeting as many trappers as he could.

It took him five years to complete the project.
“One of the things that kept me going is the magical atmosphere that happens during those swarming days,” he says. “The sky gets completely green, everyone leaves their houses and goes looking for grasshoppers. It's not just to make money, but to live that moment and spend time together.”

One of his personal favourites is a photo taken from inside the traps with everyone busy picking grasshoppers off the ground.

“It looks like a still frame from a moving image, a kind of battle relationship between man and nature,” he says. He recalls the unique atmosphere of that night in Fort Portal where big bucks were made.

“The owners of the traps made about US$5,000 in that one night and had to hire a huge truck to send all the sacks to the market in Kampala. It was the first time I'd seen someone making so much money and owner said it was the first time it had happened to him. There was a lot of joy.”

Nsenene trapping has its dangers though. Competition between hunters can turn violent, and because they deliberately break the lightbulbs to increase the light's intensity, the dangerous UV rays can burn skin and eyes.

“That's what happened to my brother,” warns Bobi Wine.

And while there's money to be made, “it's an unpredictable business” says Sibiloni.

“The wind can suddenly change and the swarm move to a different town in a matter of a half hour.”

According to the UN's Food and Agriculture Programme grasshoppers have a higher protein content than either beef or fish and are therefore a promising source of nutrition which could fight malnutrition.

Nsenene are in fact bush crickets but deforestation is depriving them of their natural habitat.

“When you fly over Uganda in a small plane you realise that in some parts there are few trees left,” says Sibiloni.

Sibiloni has noticed the drop in numbers.
“The last season was bad, the trappers lost a lot of money. They invested and never got their money back."

There's a lot at stake, not least for Ugandan youth. 77 percent of Ugandans are under the age of 25 –  the youngest population in the world –  and unemployment is high.

“You see a lot of young people hunting grasshoppers, any possibility of making money is worth trying,” says Sibiloni. “But it's a bit like gambling – you have hopes but you just don't know if you'll get your investment back.”

Sibiloni is currently working on a documentary film around nsenene, featuring Bobi Wine, to be released in 2022.

Court withdraws arrest warrant for Xavier-Sosu after reporti...
34 minutes ago