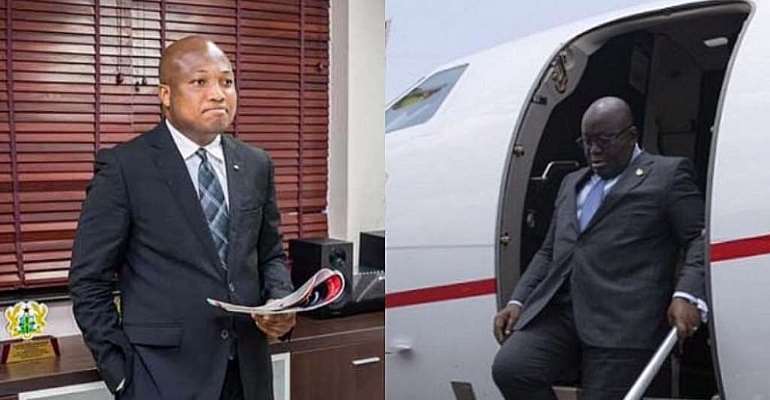 A member of the Minority in parliament, Samuel Okudzeto Ablakwa has stressed that the National Democratic Congress (NDC) will reject every move by the ruling government to purchase a new presidential jet.

This comes after the Director of Communications at the presidency, Eugene Arhin disclosed that the government is in the process of buying a new presidential jet.

“You would recollect that when the government of President Kufuor left office in 2008, it had procured two jets – the current Falcon and a bigger one, but for one reason or the other, the bigger jet was cancelled, and we were left with just one. That has happened, but you will recall that the Defence Minister stated clearly that the government has decided to buy a bigger jet to save us from all these troubles,” Eugen Arhin told journalists at a press conference at the Jubilee House on Monday.

According to the North Tongu MP, the country’s presidential jet is in good condition and hence there is no need to spend money to buy a new one.

“I must state emphatically that the Akufo-Addo administration will not get the support of the NDC in purchasing a new aircraft. We are not convinced that there is anything wrong with the current presidential jet,” Samuel Okudzeto Ablakwa said in an interview with Citi FM.

The North Tongu MP argues that the government is only seeking to satisfy President Akufo-Addo’s appetite to fly in luxury.

He insists that the NDC will neither support nor collaborate for a new presidential jet to be bought.

“This whole business of leasing expensive aircraft as the Defense Minister told parliament is borne out an insatiable appetite for obscene luxury. We are not going to endorse, collaborate and support any scheme that only seeks to advance the president’s insatiable appetite for luxury. There is nothing wrong with our presidential jet,” Mr. Ablakwa added.

The outspoken lawmaker in the last few months has been very critical of the foreign travels of President Akufo-Addo.

He has particularly accused the president of flying luxuriously when he could have saved the country millions of Ghana cedis to be challenged into developmental projects.

Mr. Ablakwa who vows not to let the government off the hook says he will file two urgent questions when Parliament resumes sitting next month to demand accountability on the president’s foreign travels in recent times.

Latest Photo Reports
Catch up with all the political quotes from our politicians.
Advertise here
More Headlines
ModernGhana Links
Volta NDC MPs join forces; chase Akufo-Addo to apologise to Aflao Chief
Probe chaotic MMDCE elections – Nyaho Tamakloe to IGP
Bawumia touts government's investment in TVET as he launches 2021 National Skills Competition and TVET Expo
Akufo-Addo government most lawless Ghana has ever had – Nyaho-Tamakloe fires over chaotic MMDCEs confirmation
Election 2024: NDC propaganda specialists are afraid of data; so sell our development projects in your localities — Bawumia to MMDCEs
"Why are you behaving this way?" — Bagbin blasts MPs who used 'macho power' at MMDCEs confirmation exercises
Take me to court, I will get the court to also overturn the decision to affirm my authority – Otumfuo dare encroachers of KNUST lands
We’ve revamped TVET education in Ghana than any government – Bawumia
Encroachers on KNUST lands will face my wrath — Otumfuo warns
TOP STORIES