Nana Frema Busia: Of "Demons and Principalities": what is wrong with Akufo -Addo's "strong" Government? 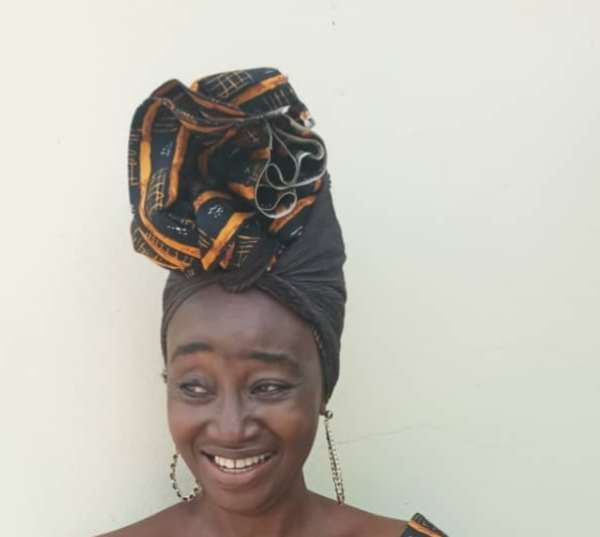 "Asem sebe", "demons and principalities all over the place" being desperately fought have deeply distracted our "Veep", H.E. Bawumia's econometrics, which was to uplift us beyond aid. Though Spiritual forces have advisedly diverted his plans into overt borrowing and a cash crunch; digitization is being attacked furiously to overcome human demons haunting and thwarting our public service and development

So far the God of our national Cathedral, who needs our "ketewa biara nsua" 100ghc a month "donkomi" contribution, after inspiring destruction of several new public buildings, has not brought deliverance yet.

No wonder, In H.E Akufo Addo's Ghana, we do not feel safe. Truth stares us in the face, Yet, We risk our lives to investigate; We are also under threat when we tell the Truth we clearly see. All is not well.

Despite having a reputed Nkrumaist President, this is not an Osagyefo Dr. Nkrumah's "at long last the battle has ended, Forward ever Backward never" March, OR a professed Dr. K.A. Busia "Progress Sure" surge. We have a spectacle of a Dr. J.B Danquah "resurrection" via constitutional insurrection", in a neo-dictatorship which Kofi Busia would be against. It is not the search for African democracy he stood up for!

in a neo-dictatorship which Kofi Busia would be against. It is not the search for African democracy he stood up for!

Arise Ghana, for God and Country, demand our country back from the affront of those who told us "Yegyeyenman", who having got the "Oman" in their grip have us in mega disappointment.

They are causing our sorrows to reach out and touch us in hitherto unknown decibels in a prison of dicey lies by their frontline appointees who create selfish debts from borrowing sprees, re-create judgement debts, and also devise plunder schemes that dent our over-burdened national budget, in their power thunder now being pursued by their own created demons.

H.E. Akufo Addo's "stranded" goverment is poised atop a "gallamsey Ghana" that has "under-mined" its own mineral wealth and health with such brute and crude gold -rush audacity. This has made our country thrash. "Water is life" has become a sarce water strife. Environmental impunity is not H.E Akufo Addo's fault, Oh No, like the financial mess, which has been intensified, Mr. President inherited it! But, has his gov. not placated the rot?

If even "gallamSTOP" did not work- out why should "gallamHALT" not fade out?

Agoo fio, Oman Adehye3, Our country bleeds profusely due leadership failure that has the 3 arms of government in a tripartite fusion of corruption that lives comfortably in a defective 1992 Constitution which is at odds with its defeatist-self and remain unchanged after its very expansive and expensive review with recommendations without implementation!

This is also NOT H.E Akufo Addo's fault. Indeed, nothing is his fault, he inherited a broken Ghana he only promised to FIX!

Yet #fixthecountry is woefully under siege.
Moral Hazzard is the key issue.
After all, politics in our 4th Republic is without Campaign finance rules. It is a jungle game whereby you can borrow "family funds" to buy votes. You at least quadruple your investment if you hit pay dirt and make H.E President. You appoint your benefactors to oversee national coffers and find ways and means to cook up schemes to recoup their losses, as you detour into just you and your cronies manifold gain. if you make MP or even better, you pay up for a dishy minsterial appointment to be called Honourable, though you are without honor, you can for sure double your funds.

How could Ghana purchase and retract sputnik vaccines at almost twice the cost against legal advice or parliamentary approval and also administer antigen tests and allegedly fake some results at a punitive $150 each? Is it because the Health Minister Kwaku Agyeman Manu, has the "I can't think straight" disease but is still at post? Is he not a national security Risk?

What has Sovereignty got to do with the authenticity of test results except optimal national disgrace if there are "ghost" scammers in addition to public service demons who ought to be caught and exorcised for profiteering off a pandemic with standard international testing?

Our national foundation is inundated with corruption that costs us $3bn(dollars) yearly which according to our newly approved pragmatic Special Prosecutor Kissi Agyabeng, he cannot "kiss" goodbye as it is beyond even God's eradication. Shall we then not say: "You are most welcome" to our dear developmental stagnation?

Is there not a desperate need for an effective check and balance infusion in ogyakrom? "Ebaa no sen? Dear Ghana, former Gold Coast, your gold dust is in gallamsey rust! Your nation is in ruination. Are you not going to Reroute those up and about in graft, with arms outstretched and unchecked?

Ghana does so need a moral impetus from all levels of misleadership especially from the "concert party Pulpit", through the unjust justice system at its highest levels, to the Presidency and partisan levels for a generic attitudinal change to boost our peoples from mediocre dog eat dog "kpa -kpa-kpa"subsistence to meteoric humane existence

Whereas Ghanaians are feeling harsh market pangs in high pain decibels, the drafted Council of state also does not give good visible Counsel. They are part of the invisible free fleecing zone. They are in on crafty deals that bleed todays Ghana on a drifting raft, en- route to a non- place, so sad.

The fusion of multi-tier leadership corruption includes "Ahenfo", "sebe o taflatse" some thief Chiefs, who sit on elevated cultural Stools and Skins who need conscientious diffusion from their monetary diversions of misrule.

So, you are still asking what is wrong with the crowded H.E. Akufo - Addo government which "has the men", and has given us a fabulous, which rhymes with nebulous, Free SHS Education. Our budget is bursting with its double cycle dilemma for which we are very grateful and have awarded a so far non- performing 2nd term that purchases past questions: 2020/21 "Pasco" for some GHs68 millon but cannot according to informed sources, provide adequate textbooks, except Danquah indoctrination deemed quality Education? Is that the moral "je ne sais quoi" the country needs?

The people are not "feeling the beef" in the deftly spoken "brofo" in the democratic autocracy, where at one point the Rule of Law and equality of opportunity were interpreted to mean the Chief Justice, the Attorney General, and the CID Boss who was oops caught red handed in evidentiary cover up, as well as guess who, the Minister of Finance and the chief honcho Presidential Secretary among others were from a tightly knit President's family not to mention those with non-titles behind the scenes pushing blind power buttons as though Ghana has been redesignated #oneAkyemfamilycompanyLtd

ARISE Ghana
#Amendtheconstitutionalmonarchy which permits dictatorship in democracy. This is certainly at odds with "de3 mo ka no asi" ie - finality through a genuinely derived consensus in a sane representative governance.

Let me make a demand of the so called Busia-Danquah, Nope, wrong order, Danquah -Busia Dombo -NPP Gov? What is there to show boot for boot for the huge debt Ghana has been plunged into? Please Show us Accountability including for covid funds, not lip-service about your suitability to break an 8-year jinx in a Ghana that has lost its dignity worshiping crooked money as its demigod.

How can a serious government, "owned and controlled" by foreigners, with huge deficits, in its first year of re-election, be preoccupied with in-fighting for Power in 2024, when its core delivery in spite of its self-congratulatory worship is wanting, with some good initiatives in need of sound implementation. Do they just want power for keepsake?

Let me diligently and humbly advise H.E. President NADAA to Beware of the groundswell of discontent; the bubbling up of emotive disquiet over a pompous and elite inner clique with their distinct sectarian Danquah agenda, riding roughshod as though Ghana were their footstool, proposing doubtful programs as premium accomplishments. ENOUGH

Are they too blind sighted by power trappings to understand that their 'inward looking "Nye bro" priorities are not going down well? People are tired of governance manoeuvrings which ring coy deception loudly, making Ghana ripe for a military, sorry again, militant civilian implosion!

What kind of legacy are the serial misdeeds being brushed under the carpet inclusive attempt at the scandalous Purchase of an Oslo property at an extraordinary inflated fake price that went bust, endorsement of lethal take-over of Tema Port by Vincent Bolore, BOST oil Resale treachery, GHAPOHA boss fracas, DVLA safety kits Agyapa, Oyerepa, PDS, Kenbond and other gross scandals nicely glossed over while financial scars remain intact on our debt-ridden budget as though NPP seeks competitive advantage over NDC corruption scandals for medals!

May our bleeding entrails cause us to demand what is right from crooks who have us in their wicked nooks of self - satisfaction at our expense from both aisles of the NPP /NDC political kingpins.

Angry hurting Ghanaians must look ourselves, in the mirror to see if our governance in the blood-soaked 4th Republic with its defective and expedient constitution, is not somehow our reflective image we put in power to pave wrong paths for a Ghana that thinks it has run out of options

How do we assess our chosen rulers that we love so much for the corruption we claim to disdain in citizen politician corruption collusion?

Hello President Akufo Addo, kindly reboot an ethical civil reconstruction, starting with your Presidency. Please stop the parading gallery of elitist mischievous intellect. Let us have exemplary accountable leadership. This is the only way we can demand countrywide, attitudinal, and self-fixing.

Sincere Musings of a concerned "Presidential" daughter. Thank you

MMDCE appointments shouldn't be seen as job for the boys' - ...
53 minutes ago