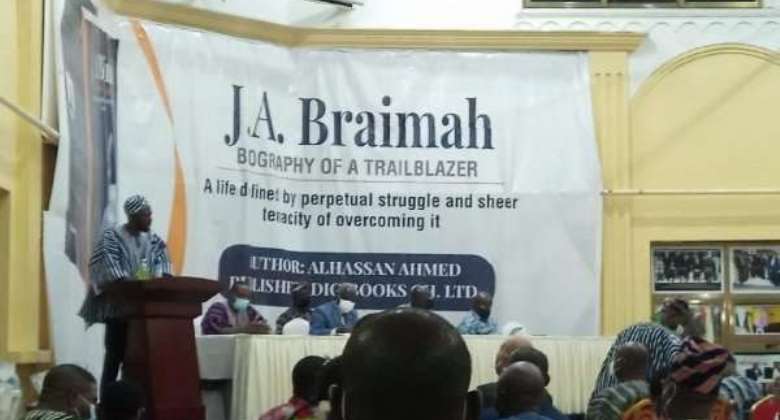 An article has been chanced upon in the Daily Guide newspaper titled "NPP bigwigs eulogise J. A. Braimah". It was published by Ernest Kofi Adu on Monday 24th May, 2021.

The publication captures events of the launch of the book, titled, J. A Braimah: Biography of a Trailblazer on Thursday 20th May, 2021 at the Ghana Academy of Arts and Science, Accra.

Per the content of the publication, there was found to be incongruities in the points raised by some leaders of the New Patriotic Party (NPP), notably, H.E. Alhaji Dr. Mahamudu Bawumia, Vice President of the Republic of Ghana, John Boadu, General Secretary of the NPP and others during the launch. It is therefore proper that corrections are made, lest, our unborn generation accept these distorted facts as the true historical account. We would have then done a great disservice to the United Party’s (UP) tradition and the future generation if allowed to fester.

Essentially, the narrative by H. E. Alhaji Dr. Bawumia that; “J. A. Braimah is the most excellent specimen of the enviable Danquah-Dombo-Busia tradition, and this has never been lost on the New Patriotic Party” is an accolade very undeserving of the man. This is because if a person whose lack of selflessness got him expelled over disagreements with the party on its position to boycott National Assembly proceedings until UP members who were detainees under the PDA were given a fair hearing in the Court, and eventually his defection to CPP, would be accorded with such honor, then the Party risks breeding a future generations who would find no need to be selfless and sacrifice for the further advancement of the UP tradition.

Furthermore, the position of John Boadu that; “We have a rich and enviable political tradition today because of J. A Braimah” is very inaccurate and erroneous. It is worthy of mention that, after the enactment of the Prevention Detention Act (PDA) by Parliament in 1958, the defection of Joseph Adam Braimah, who was then the Vice-Chairman of UP together with some other leading members of the Northern People’s Party tradition to the CPP, among other negative effects, led to the huge dwindling of the strength of the UP at the Northern sector of Gold Coast. It is instructive to note that, it is because of the then actions of Braimah and others that have subsequently resulted in the current weakness being witnessed by the modern New Patriotic Party (NPP) at the northern sector of Ghana.

In August 1957, the Government under Kwame Nkrumah passed the Avoidance of Discrimination Act: ‘An Act to ban political parties with sectional, ethnic or religious traces and which did not have national character’. Upon realization by the leaders of the opposition parties that the prime aim of the law was to disband all political parties except the CPP and introduce a One-party rule in Ghana. Okyeame Baffuor Akoto, founder of National Liberation Movement (NLM), before the law could come into effect on 31st December 1957, chaired negotiations which convinced the leadership of the other opposition Parties to come together to form one party to be called the United Party (UP).

According to the Memoirs of Bawumia (2004); “The leading members of the Northern People’s Party formed an alliance with the NLM because they saw the NLM as capable of winning the 1956 elections. It was the considered opinion of them that with the financial resources at its disposal and having appeared to have popular support in Ashanti, the National Liberation Movement could win all the 21 seats in Ashanti and many more in the colony and was, therefore, likely to form the next Government.”

The aforesaid, should as result, inform and certify the huge significance of the NLM in the negotiations and formation of the UP in 1957 and the further advancement of the tradition and its transition into the modern New Patriotic Party (NPP).

Facts, they say, are sacred, and must be told at one piece. It therefore behoves us as patriots to quash and correct all unsubstantiated claims of the history of the UP tradition bandied around willy-nilly.

Latest Photo Reports
Catch up with all the political quotes from our politicians.
Advertise here
More Rejoinder
ModernGhana Links
RE: 1.6 Million “Left Behind”: Errors in Ghana 2021 PHC report “exonerate” U.S. Census Bureau
Re: Bawumia's Call On John Mahama To Convert, Hypocritical, Does He Intend To Convert Into Christianity For Visiting Churches?
Rejoinder: Election 2024: Greed and selfishness may rock the NPP’s boat into opposition
Re: ATAG and Innovative Teachers Secure an Injunction on the Distribution of the Laptops
RE: Bagbin Becoming Too Much Of An Activist
RE: All Ashanti lands belong to Otumfuo Osei Tutu II with all other Ashanti chiefs being simply caretakers to the lands they occupy and with no family-owning lands in Ashanti
Rejoinder: Ghanaian man asking Nana Addo to fix the country in Germany allegedly deported
RE: TESCON-UEW to demonstrate on the day of SRC elections
Re: The Archbishop Of The Catholic Archdiocese Of Kumasi Makes A Scandalous Decision
TOP STORIES