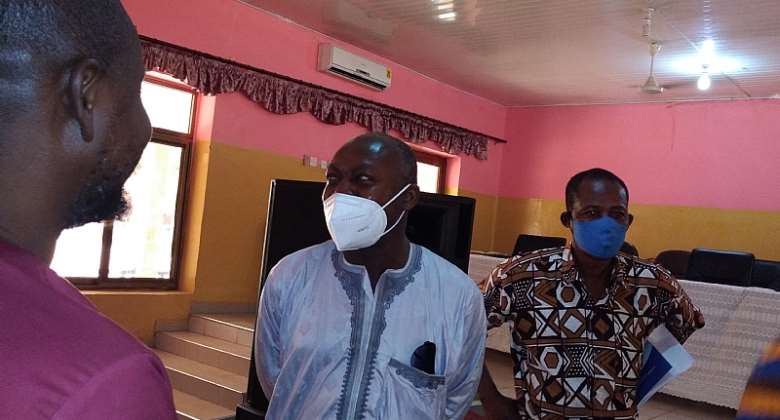 A Denmark-based-Ghanaian educationist and lecturer at the Aalborg Universitet Dr. Hanan Lassen Zakaria have called for the involvement of parents in the education of their wards at all stages of education.

Dr. Hanan observed this as part of remarks he gave during a review meeting of the Professional Learning, Communities, and Coaching (PLCC) project on Thursday, April 8, 2021, at the Tamale College of Education.

The one-year pilot project dubbed "Strengthening Basic School Teacher Quality through Professional Learning, Communities and Coaching" (PLCC) is being implemented by the College (TACE ) with funding support from the Commonwealth of Learning (CoL).

In all, 380 basic school teachers in 32 selected schools in the Northern and North East regions of Ghana benefit from the project.

Originally, the pilot project started in October 2019 to reposition In-Service Basic School Teachers and enhance their professional competencies in lesson development and delivery.

The implementation was however interrupted by the outbreak of the COVID-19 pandemic, therefore the delays.

As the last activity under the pilot project, the meeting provided an opportunity for the implementers to analyze their successes, challenges, and the way forward.

Dr. Hanan Lessen who is the lead consultant for the project noted that though there are lots of efforts in building the capacity of teachers and students, the parents were often forgotten when it comes to their education.

"The thinking says that if you support or if parents get involved with their kid's education, the tendency is that the learning outcomes of their kids in schools will be higher" he stated.

He noted that the outcomes of the pilot project were very encouraging and that the first phase termed TACE CoL 1.0 would be replaced with phase two ( TACE CoL 2.0) to give room for more inputs.

He advised that the number of clusters under the PLCC project be increased so that many schools can benefit.

The Vice-Principal of the college Mr. Nuhu Imoro Alhassan on behalf of the principal Dr. Sulemana Iddrisu stated that despite the outbreak of the Covid-19 pandemic, the project was able to achieve its objectives.

"For the pandemic, the pilot project would have come to an end by August last year" he noted.

Metropolitan Director of education for the Tamale Metro Assembly Mr. T. D Amithus, in his submission lauded the project. And called for increment in beneficiary schools to give way for more pupils to benefit from the project.

"The thing that should be done differently which would have made the project a lovely one is just to increase the number of schools so that many schools will benefit. The organization is okay, whatever that they have done is appropriate, but what would have been more interesting and make the project an enticing one would have been to size up the numbers" he said

Beneficiary teachers who spoke to the media thanked the Tamale College of education and the Commonwealth of Learning (CoL) for the knowledge they have gained from the project. According to some of them, though they were trained teachers, the benefits they derived from the project were incomparable.

On his part, project contact person, Mr. Hamza Alhassan said it was a dream come true that phase one of the project has ended successfully despite the spark of the COVID-19 pandemic and other challenges.

He also said he was hopeful that many of such projects would come out to help make Teachers more professionals as they should be, which would, in turn, improve learners' performance in schools.