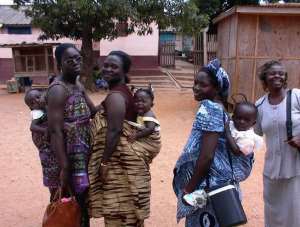 Good 1441 years ago, one of the disciples of Prophet Muhammadﷺ intended to join a Jihad expedition. Heﷺ asked him whether his mother was alive. The disciple responded affirmatively. Then he said, “Stay with your ‘mother’, for ‘Paradise’ is beneath her feet.” So, for that disciple, taking care of his mother was deemed for him, his Jihad.

This and plethoras of advocacy from the Quran and Hadith clearly show that heﷺ opted for women empowerment long before the proclamation of the second Sunday in May was designated for Mothers’ Day Celebration, by President Wilson Woodrow of America in 1914.

With that said, there are several instances out of which the love we have for our parents has been overwhelmingly daring, even prior to the cacophonous Mothers' Day celebration. One of such which nobody saw and, thus we couldn't have photographed was that awful afternoon when an enraged vendor accosted and hurled heaps of insults on mom. What was even her crime? That, she had bought some items on credit and couldn't have fulfilled the terms of the payment as agreed. If not for poverty’s sake, she would have duly met the dictates of the agreement.

As little as you were then, your forehead knitted looking at mom with hazel eyes, in the state of distress, while you weren’t in a position to salvage the demeaning fracas. Ideally, with that good deed alone (of feeling guilty for not been able to fight for your dear mother), should you have died that very day, I am sure the gates of Paradise would have been opened for you.

Factually, many of us have witnessed this situation of emotional distraught and other heartbreaking scenes which our mothers put themselves to for our wellbeing. They do this tirelessly well; even without a hiatus, and irrespective of we being young or grown. It’s more like a treaty they’ve signed to willingly die for us, as long as they draw breath. Family, they deserve the gold medal, silver medal, and bronze medal altogether. We’ll satisfy our fathers with a mere consolatory price.

In principle, it would be prudent that we endeavor to make everyday a Mothers’ Day Celebration in our little corner. Imagine stinting your mother just on the footing that you’re married to a new woman or husband. The kind of trauma you would consign her to, in that regard? Everyone has to take keen interest in making his mother the queen on his throne. Therefore, we must be wary of dumping them at old age homes.

The fact that you lavish greatly on your mother doesn’t afford you the morale, and moral right to say words of contempt to her when she persistently takes to nagging due to old age. More importantly, there shouldn’t be any day you should be disdainful, even if she makes you angry. And that you would boastfully remind her about the expensive expenses you do make for her. Don’t transgress these limits; for doing so is grievously odious in the sight of our Lord.

Let me leave you here with this tradition of the Prophet Muhammadﷺ who said, “even if you are to gather a mountain full of gold, it cannot compensate the excruciating pains your mother went through for your birth, upbringing, and survival.” So beware.