Making The Farmer King: Why Fair Trade Is A Big Deal 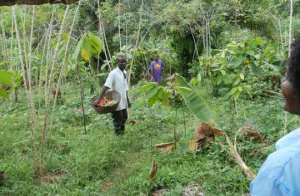 Looking through my grandfather's diary 25 years after his death, I got some insights into the life of a farmer. Although he had three farms which would have added up to at least 100 acres of farmland, he was not conversant with climate adaptive farming and lived in perpetual fear of low yield. If only he had access to some training in agriculture, maybe those farms would still exist today and I could have trained as a farm manager. The fact that ‘the first missionary group to establish formal Western-styled education in British West Africa did so towards the end of the eighteenth century’ means that like my grandfather, many other young africans had (great) grandparents who were also engaged in farming (and other adjunct activities) as a source of livelihood. Watching one’s grandparents invest time, scarce funds, and energy in agriculture without commensurate returns could be partly responsible for the large scale disinterest in this industry.

Small holder farmers constitute the lifeblood of the society. We often take for granted the sheer ease with which we can stop by at the market and buy produce for nourishment. As a lawyer, I am aware that my services are not always needed. In fact, where people choose to be honest and peaceful, where there is no reason to doubt and people choose to be friendly, a lawyer has no real job to do - this is not the case for the farmer. As critical as the farmer is to our society, his position is oftentimes precarious due to the actions of the same society. The effects of climate change are most felt by farmers while the propositions that have been made to save the planet revolve around farmers. It appears that whichever way the conversation goes, farmers are placed squarely in the middle.

Keeping a farm is akin to taking care of children - it is done lovingly, steadfastly and hopefully. Farmers everywhere put in their very best in order to get the best. However, there are quite a number of factors which make the return on investment quite disappointing. The very first problem is that of proper storage methods. ‘‘In Africa, inefficient processing and drying, poor storage and insufficient infrastructure are instrumental factors in food waste and depreciation’’ Howto tackle food waste and security bottlenecks in Africa? - An … . The reduced quality leads to an inability to sell such products at a reasonable price point. The farmer is then forced to choose between letting the products rot and losing both his capital and projected profit or selling it off at any price in order to break even.

In the global south where poverty is a mainstay, it is unfortunate that there exists a staggering level of post harvest losses. An estimated 25percent of agricultural produce is lost following harvest in countries such as Nigeria, due to mishandling, spoilage, and pest infestation. Furthermore, there is a persistent problem of a broken or non-existent agricultural chain in the agro allied sector in the global south. This has led to an industry whose growth has remained stunted over the years.

The problem of multinationals who have not adopted best practices in procurement of commodities is also a cause for concern. Although the introduction of the Dutch Max Havelaar FairTrade label in 1988 which led to the creation of several FairTrade Labelling Organizations (FLO), has improved the disposition of multinationals toward the global south, a lot more needs to be done in terms of punitive legislation for non-complying companies, improved awareness for the civil society as well as climate adaptation training for the farmers, particularly in the global south.

Lastly, in Africa, the youth have a wrong perception of agriculture as a whole. The fact that agriculture is not viewed as being profitable because the products are sold for next to nothing has contributed to a resolve by the youth not to venture into it, even in the face of crippling unemployment. As stated earlier, where the probability of depreciation is high, the price point at which the product can be realistically offered is low and incommensurate to the input. This aversion for agriculture has led to a drive to acquire multiple university degrees in order to qualify for highly competitive office jobs. Unfortunately, because manufacturing is nota strong feature in many African countries and agriculture does not seem to be a viable option, we are experiencing a phenomenon of overqualified/highly skilled yet unemployed youth. The job market for formal jobs shrinks daily as foreign companies shut down operations due to decaying government infrastructure and ‘zero ease of doing business’ while local companies lack the capacity to satisfy the demand on ground and fill the vacuum created by the exodus of these companies.

Through its agricultural programs in Morocco, and importantly the USAID Farmer-to-Farmer Program which it administers, the HighAtlas Foundation (HAF) is working on re-orientating youth to embrace agriculture, encouraging female participation, and training smallholder farmers in climate adaptive agriculture. For 20 years, HAF has garnered experience in working with small scale farmers and cooperatives and is poised to leverage on this experience to help farmers with pre-harvest best practices and post-harvest losses. These kinds of successful programs need to be vastly expanded to raise awareness about the role of young people in agriculture, with the hope of bringing about an agricultural revolution, in Morocco and in the global south.

Olufunmilayo Aiyegbusi is an attorney in Nigeria, a graduate student in international development at University of Groningen, and a Volunteer with the High Atlas Foundation.