The Hard Questions The Government Must Answer Regarding Galamsey 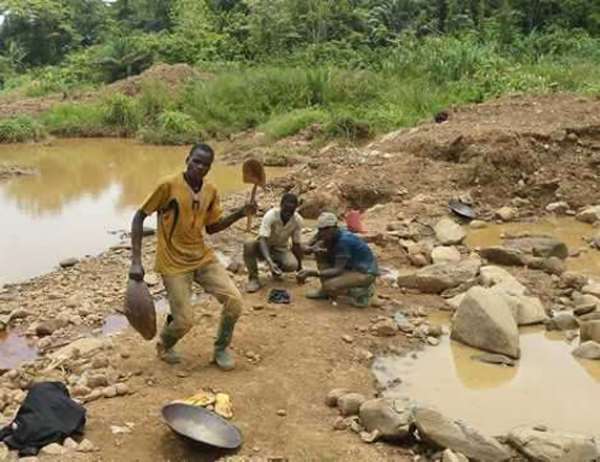 OF course, we must congratulate the Government on the quick action it has taken to implement come of the recommendations made by the National Dialogue of April 14-15 2021.

One report on the renewed attack by the Government on galamsey stated that: Two Chinese nationals were arrested in the past week for illegally mining at a site in Patatwumso, in the Western Region. The Wassa East District Security Council arrested them at their rented residence at Ateiku. They were being protected by armed guards when they were captured.

Attention was drawn to their operations about five weeks ago. Based on information, Operation Vanguard stormed the location. The galamseyers were preparing to leave the site and had begun disassembling their machines when they were apprehended.

The arrests followed recent reports that illegal mining activities are still ongoing in many parts of the country. Meanwhile, the Lands and Natural Resources Minister, Mr Samuel Abu Jinapor, has directed the Forestry Commission to stop issuing permits for mining in the country's forests. He said no company or individual would be allowed to go near the forests or river bodies to mine.

Announcing a "new" initiative, President Nana Addo Dankwa Akufo-Addo had "ordered the deployment of 200 military men" to guard some river bodies across the country. This has been

largely hailed as a “game-changer” in the combat against galamsey.

But one does not need to be a cynic to ask: “How often have such "initiatives" been reported upon in the media, in the past, only to "fizzle out" unaccountably for galamsey to continue?

What happens to the many arrested persons who are paraded before the cameras during anti-galamsey operations?”

Our Governments -- and I emphasize Governments -- have been playing mind games with the populace over galamsey. For so horrendous have been the result of galamsey on our rivers and water-bodies that the arrests of galamseyers were started by the administration of ex-President John Mahama!

However, Mahama then succumbed to pressure within his party and “shot down” his own

programme by complaining PUBLICLY that the military units sent to carry out the arrest of galamseyers were using “undue brutality” against them! For good measure, he sanitized galamsey

by claiming that the galamseyers “only wanted to earn a living.” (!) Imagine a head of state excusing crime because its perpetrators "only wanted to make a living!"

Taking the cue from the ex-President, the military then relaxed their operational methods, and eventually, the campaign against galamsey during the Mahama administration died a natural death.

Within six months of coming to power in 2017, the Government of President Nana Addo Dankwa Akufo-Addo had renewed the campaign against galamsey. Amidst a media fanfare, the Minister of Defence Dominic Nitiwul, and the Minister of the Interior, launched “Operation Vanguard” in July 2017.

As many as 1000 galamseyers were arrested. 340 makeshift accommodations were destroyed in January 2018 alone. 3,002 Changfan machines (floating devices in which mechanised "gold-panning" ios carried out) were destroyed.

But the galamseyers did not stop their operations and periodic seizures of excavators and chanfangs continued to occur. Meanwhile, the galamseyers began to actively corrupt Operation Vanguard personnel, and eventually, that Operation also fizzled out.

Meanwhile, the level of pollution of water bodies was causing an increase in water purification costs for the Ghana Water Company. President Akufo-Addo again responded by bravely promising to end the galamsey menace, even if it would ”cost him his presidency.”

How serious the galamsey problem had become was revealed by “Operation Vanguard" when it disclosed that 58 different types of assault weapons had been retrieved from galamseyers! The weapons included pistols, single and double-barrelled guns and pump-action guns and AK-47s! Some of the guns were taken from Chinese nationals. But no emphasis was placed on the fact that they, being armed foreigners, were, in effect, “waging war” against Ghana with the weapons they had been arrested with! In fact, they could be classified as "mercenaries" collaborating in "genocidal" activities against the population of Ghana.

"Genocidal? Yes -- because they were destroying the water-sources of Ghana, and it is not rocket science to understand that if you kill a nation's water-sources, you kill its people. Just as you would do, if you scooped all the oxygen out of its air-supply system!

That aside, it was reported by the commander in charge of “Operation Vanguard” punishments meted out to galamseyers was not strong enough to be a “deterrent”. enough. Most Ghanaian offenders were given a fine of between 1000 and 6000 cedis (between US$200 and US$1,000.) Jail terms ranged from four to eighteen months.

Some of the Chinese offenders were scandalously deported without being imprisoned in Ghana first. Many came back as a result -- aided by unpatriotic Ghanaian financiers and visa-granting plus corrupt immigration officials In fact, the then Public Relations Officer for Operation Vanguard stated that only 22 out of 172 Chinese nationals arrested had been jailed since the beginning of the operations. What happened to the rest? Therefore, no one was surprised when, earlier this year, Operation Vanguard ground to a halt. How long will the “new” operation against galamsey last?

Are we going to be subjected to another comical scenario of “STOP-GO”?

The Government ought to realise that the human condition does not allow for a change of attitude amongst criminals without a severe punishment being IMPOSED ON THEM!

Now, an interesting phenomenon is that almost everyone in the country hypocritically agrees -- with their lips -- that the destruction of our rivers and water-bodies cannot continue to be be tolerated. Chiefs; intellectuals; covoc bodies; local citizens' groups!

Yet although our Government has enacted a tough law against galamsey operators, called “Act 995”, there have been no protests over the fact that NOT A SINGLE PERSON HAS BEEN SO FAR PROSECUTED UNDER THAT ACT!

However, it's not as if the galamsey activities that caused the enactment of the Act have ceased!

Therefore, the hard questions the Government must answer are these: (1) will the Government now charge the 2 Chinese and their Ghanaian patrons who were arrested at Patatwumso, in mid-April 2021, to court under Act 995?

How many other galamseyers (both Ghanaian and Chinese) have either been charged and are “on bail”, or are awaiting charges, after being arrested during galamsey activities? Why has their prosecution not been brought to an successful end for such a long time? Why do the police and the prosecution authorities remain so silent over these issues, desapite the fact that it is no secret that the leader of the Governmewnt has publicly decreed that galamsey cannot be tolerated by his Government? Does he speak for everyone in the Government? In particfular, does he speak for the Minister of the Interior? Does he speak for the Attorney-General? If they do not accept his leadership, what ARE they doing in his Government? Do they want to expose him to the world as "a toothless bulldog"? Is that the thanks he gets from them for appointing them to high office?

Why do the police fail to tell Ghanaian public anything at all whatsoever about the discoveries they make, during their investigations, regarding the sponsors of the galamseyers who are arrested? Isn't one of the cardinal principles in successful crime detection the ability to “follow the money” and thereby cut "the snake's head" in the crime syndicate apparatus? Whom are the police protecting and why? How do the police expect to receive useful information from the public -- a plea they are not shy of making! -- if the public believes, with reason, that generally-speaking, the police seem to be protecting galamsey criminals?

We await the answers. Meanwhile, we warn the Government that CREDIBILITY, once sacrificed for any political or social reasons, can never be regained. And a Government without credibility had better watch out, as the vacuum thus created in the body-politic, can result in unexpected consequences.