Ghana’s Flawed Democracy; an Inhibition to Our Progress as a Nation? 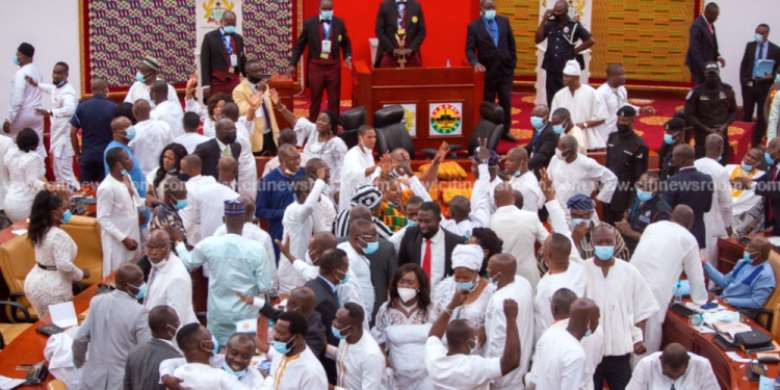 The kind of “democratic governance” practiced by a nation is closely linked to the development of that nation. It is therefore imperative that every nation chooses for itself the kind of ‘democracy’ that best suits and drives its developments.

Ancient empires (Mali, Ghana, Roman empires and Egypt) and Western civilization and development were mostly based on monarchy and not strict democracy. Most developed and built their nations by monarchy before the advent of democracy (some nations still practice monarchy).

Even in shifting from monarchy to democracy, every nation chose the "democracy" that aligns with its developmental agenda. This is why the democracy in Germany with its Chancellor system is different from France and Italy which is also different from that practiced in the UK and USA. Germany's democracy has allowed Angela Merkel to be Chancellor from 2005 to date and it has contributed to a sustained development. France and Italy practice the semi-presidential system with a president and a prime minister.

America of all which prides itself in democracy has never practiced democracy in its strictest sense. History shows how blacks and people of colour were maltreated and side-lined. It was not until 1965 that the Voting Rights act was enacted to prohibit racial discrimination after pressure from the Civil Rights Movement. Even now, America’s democracy permits the election of the president to be done by a select few (the Electoral College) and not by popular votes.

The advancement of most countries in the East (Asia) cannot be separated from the kind of "democratic governance" they are practicing. We can talk of the advancement of China and the nations in the Arabian Peninsula (i.e. Qatar, UAE, Saudi Arabia), but we cannot do so without factoring the kind of democracy behind these advancements.

Russia is a super power and has advanced partly because of the kind of "democratic governance" being practiced there.

So it can clearly be seen that every nation that is doing well globally, cannot be assessed without looking at the kind of "democratic governance" practiced in that nation.

In Africa, people are quick to talk about the achievements of Paul Kagame in Rwanda, but mostly leave out the kind of "democratic governance" he is running. It's hypocritical and almost ignorant to do that. As quiet as it is kept, Kagame is seen as a ‘benevolent dictator’ and has ruled Rwanda from March 2000 to date.

Paul Kagame has set up a "democratic" system that is helping him to implement his vision and aspirations for his country. Without the kind of "democracy" he's operating, I doubt if he could have achieved a quarter of what he has done in Rwanda.

What kind of "democracy" do we practice in Ghana and how has it helped us in developing our nation?

In Ghana, a president has 4 years in his first term after which he can run for another 4 years in his second term, making 8 years. In my opinion, though this 4 years, maximum 8 offers a certain level of development, it's at a snail’s pace and counterproductive because of the following.

Term of Office Too Short for Effective Transformation

During a president’s first term, a greater part of his first year is mostly used for appointments, transitions and parliamentary approval of projects. It's in the second year that most projects commence.

However, in the third year, the president and MPs who want to run for another term focus on party primaries and petty projects that will help them win another term. Most of such projects are poorly done and are just superficial gimmicks to help them get another term. The last year of the four years is used for campaigning and commissioning of projects.

This has been the roller coaster of the fourth republic, and it is duly characterized by our slow-paced development.

It is in a president's second term that real work begins and it is also too short to complete most projects that is why governments leave office with a lot of uncompleted projects. When there is a change of government, the new administration also starts their own projects without continuing what they came to meet.

The constitution in Ghana’s democracy has created a “winner-takes-all” phenomenon where the elected president has power to remove and appoint almost everyone that occupies state office, from district to national. He appoints all the boards and directors of public corporations, institutions and agencies. Even public toilets are taken over by winning parties. This has made our governance system a lucrative investment venture where the actors (politicians) invest in to make themselves rich after winning power.

Ghana’s democracy has become a tool that some politicians use to get power so they can control the resources of the country and live their affluent lives at the expense of the citizenry, most of whom are forced to live on the margins of our society.

If our ‘democracy’ is to be beneficial the ‘winner takes all’ syndrome powered by the constitution should be dealt with. The unbridled power of the executive to appoint and ‘disappoint’ almost everyone that occupies a key position needs to be diluted. Heads and boards of some state institutions (GES, GHS, the security services etc.) should be done independently and not by the whims of the new president.

Media Space Needs to be Controlled

In the guise of democracy, we wake up every morning to a thousand voices sharing opinion on issues that most are ignorant about. And all these voices are to be afforded equal weight, regardless of substance or merit. As a result, opinions of real weight from honest people that can progress the nation tend to sink with barely a trace in television’s ocean of banalities. The media, a supposed fourth arm of government fuels this confusion. All sorts of ‘nonsense’ are now shown on television in the name of democracy and rights.

Having a National Development Plan; a blueprint for all political parties to follow is also a major issue to be looked at another time.

I am never against democracy, but I believe every nation should decide for itself the ‘democracy’ that can transform the nation and citizens. What good is democracy if it cannot elevate the lives of the citizenry?

I admit we can't put all the blame on our 'democracy', our sense of responsibility, respect for laws and procedure among others are of equal importance. But our democracy creates room for all other ills to thrive.

We compare our development to that of Singapore and Malaysia without also looking at the "democratic governance" that made them the nations we are so quick to compare ourselves to. Malaysia operates a federal constitutional monarchy with a monarch as head of state who appoints a prime minister as head of government.

Lee Kuan Yew, the man behind the transformation of Singapore ruled as prime minister of Singapore from 1959 to 1990 with a guided democracy that brought development to his country. If Singapore had practiced our sort of porous democracy with a maximum of eight years, could he have transformed Singapore?

I believe it is time to reshape our democracy to suit the kind of people we are and the transformation we want to.

If we want to see the development that happened in Singapore and is happening in Rwanda, then we should look again at our kind of ‘democracy’ and reframe it to best suit us. Our democracy suits the West more so they would that we keep it this way. It makes us porous and easily influenced. Anyone can be influenced, hide behind democracy, talk 'foolishly' and misbehave to the detriment of the nation.

Either we increase the four years to five/six years or increase the number of terms to four while maintaining the electoral process. The citizens will of course vote to determine whether a president deserves a second, third or fourth term. If a president is not doing well we change him/her after his first term. But if a president is doing well for the nation, we don't have to change him/her after eight years. Keeping the same political party in power after eight years with a different person is still changing because individual's vision and influence varies.