The Truth about Unemployment in Africa 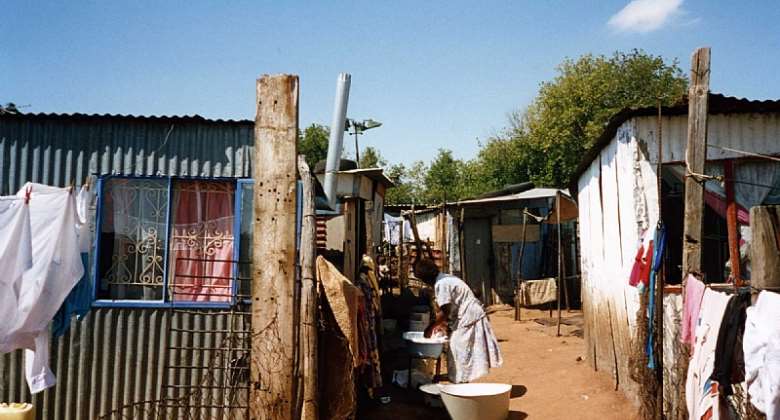 Africa is home to the world’s youngest and fastest growing population; with people under the age of 25, accounting for about 60% of the continent’s entire population; representing 800 million people.

Highlights of a recent study from the International Labour Organization (2020) suggest that by 2100; close to 50% of the world’s youth will be African. Providing sustainable job opportunities for Africa’s bulging youth population has been a daunting task for countries across the region, partly because economic growth has not created sufficient jobs. However recent data from the International Labour Organization (2020) suggest that Africa’s youth unemployment is the lowest in the world. Africa’s youth unemployment dropped to 11.7% in 2012 and declined significantly over the last 8 years; the continent’s youth unemployment is projected to further reduce to 10.6% in 2021. Interestingly, this data does not delineate the intricacy of youth unemployment in Africa as there is a disparity between sub-Saharan Africa and Northern Africa. While youth unemployment in sub-Saharan Africa has been low, stable and peaked at 8.7% in 2019, North Africa recorded a high unemployment rate of over 30% in 2019. Although this figure is expected to slightly decline to 29.6% in 2021, Northern Africa has the highest unemployment rate in the world. An in-depth analysis indicates that Africa’s low youth unemployment rate is attributed to the fact that a large proportion of the continent’s workforce is engaged in the informal sector; where wages are predominantly low and social protection schemes are few; people in this region are forced to do menial jobs just to survive. 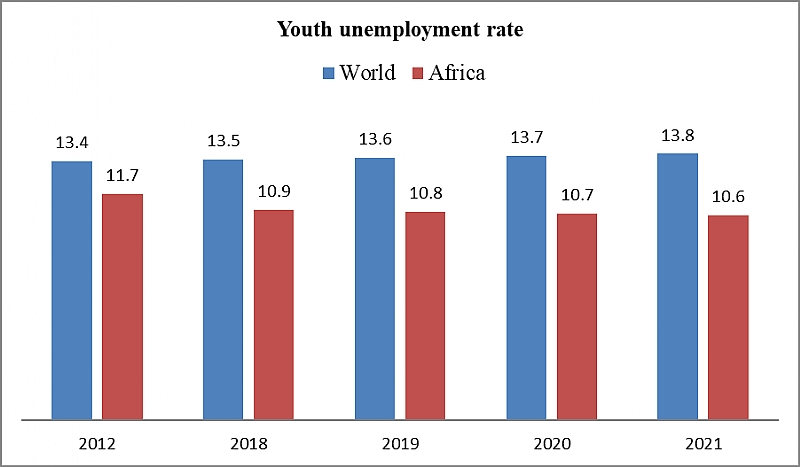 This peculiar labour market condition in Africa reveals the flaws in using only unemployment rate as the most reliable indicator for assessing a labour market particularly in developing countries. An ideal indicator that truly reflects Africa’s labour market is the combined rate of unemployment and the potential labour force, which indicates labour underutilization by capturing the mismatches of labour supply and demand in the region. Although the combined rate of unemployment and the potential labour force in Africa is higher than the continent’s unemployment rate, this rate exhibits a declining trend as opposed to the world trend which has been increasing; Africa has been experiencing a declining trend from 20.4% in 2012 to 19.1% in 2021, while the world trend has been increasing from 19.6% in 2012 to 20.5% in 2021. However the share of Africa’s youth population that is not in employment, education or training (NEET) has been mirroring the global trend, which has been increasing since 2012. Africa’s NEET rate has increased from 20.4% in 2012 to 20.5%, 20.7% and 20.7% in 2018 2019 and 2020, respectively. Africa’s NEET rate for 2021 has been projected to increase to 20.8%, representing an increment of 0.3 percentage points. 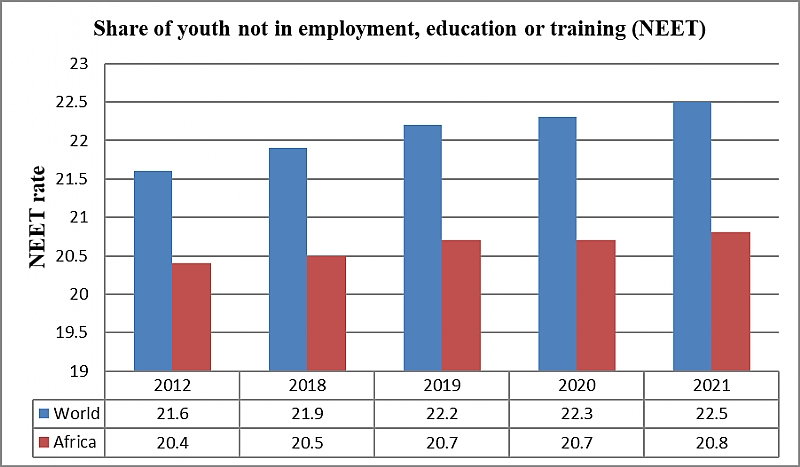 Even though the available data for Africa’s NEET suggest that there has been a gender gap of about 10 percentage points since 2018, the region’s gender gap compares favourably globally, specifically in Arab States and Asia Pacific where the gender gap is 30 and 20 percentage points, respectively. For many years, young women have been the most affected in Africa’s NEET pattern. However the NEET rate for young women declined from 2012 to 2018 while that of the men has been increasing from 2012.

The disparity in gender for the two sub-regions is attributed to varying economic landscapes and cultural barriers in sub-Saharan Africa and Northern Africa. In spite of the yawning gender gap between the two sub-regions, Africa’s employment to population ratio (EPR) has been quite stable although it declined from 40.8% in 2012 to 40.1% in 2018. From 2018 to 2020 the EPR has remained stable with a slight drop of about 0.1% expected in 2021. The EPR measures the African economy’s ability to create employment, irrespective of the quality of the jobs. 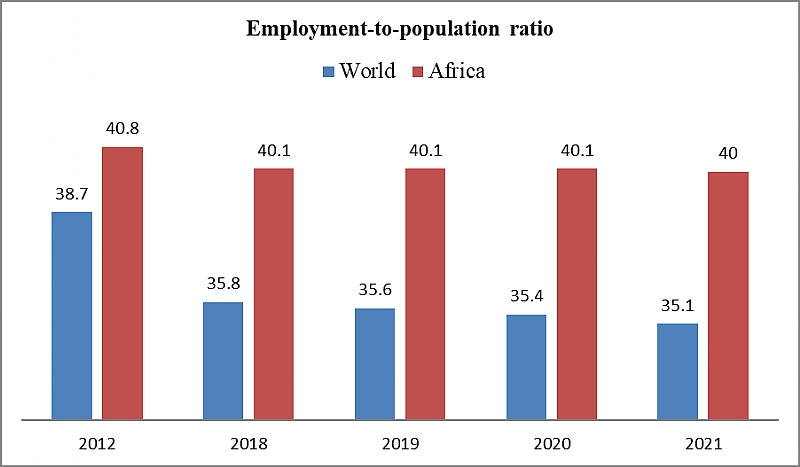 Africa’s current EPR indicates that about two of every five people of working age are engaged in a form of employment. When compared to other regions and the global trend, Africa’s EPR has been relatively stable. This is largely attributed to three main factors; many young people stay longer in school, high population growth and growth in the labour force. This means that about 11 million young people are expected to enter Africa’s job market every year. Even though the aggregate number of formal jobs in some African countries is increasing, most of the region’s young people are more likely to work in the informal sector where they are usually paid meagre wages.

The findings of a study conducted by the International Labour Organization (2018) shows that the informal sector is the main source of employment in Africa, serving as an employment destination for 85.8% of the region’s entire employed population and 71.9% of employment that excludes agriculture. An overwhelming 94.9% of the youth, aged 15 to 24 are informally employed in Africa; while some of these youth have little or no education, two-thirds have secondary education and almost one-third have tertiary education. Overall about 95.8% of young people are informally employed in sub-Saharan Africa, compared to 87.5% in Northern Africa. Young women outnumber their male counterparts by a small margin in the informal economy but this gender gap increases with age. The dynamics for different age groups of young people varies; for instance, young adults (aged 25-29) are less likely to be in the informal sector. Most of the young people in Africa work in the informal economy, a sector that mostly offers very low wages; it is not surprising that there is high incidence of poverty in the region.

Although data from the World Bank suggest that the poverty rate in Africa has dropped significantly, from 54% in 1990 to 41% in 2015, the population of people living in extreme poverty has soared; mainly as a result of population growth. To provide sustainable panacea to the challenges associated with employment in Africa; governments across the region, should implement evidence-based policies that builds vibrant local economies, that could serve as reliable source of employment for young people. Policy-makers could partner with development organizations and other relevant stakeholders to implement programmes that will equip young people with adequate knowledge and skills required for entrepreneurial activities and other job opportunities. 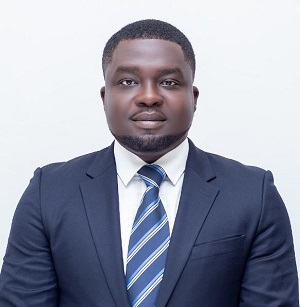