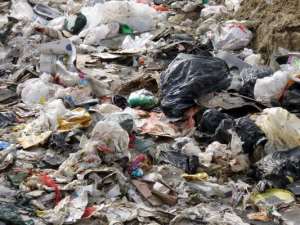 As Ghana joins the world to mark World Consumer Rights Day which falls on 15th March every year, CUTS Ghana, research, advocacy, and public policy think tank has launched a campaign to raise awareness and engage consumers to adopt and promote more sustainable practices to tackle the plastic pollution menace in the country.

A recent research report by PEW Charitable Trust & System, titled “Breaking the Plastic Wave” calculates a tripling of the flow of plastic materials into the sea by 2040 if major policy changes, innovations and changes in behaviour do not occur. The report further reveals that by 2050, it is estimated there will be more plastics in the sea than fish. It further estimates that 8 million tons of plastics end up in the sea every year and single-use plastics such as plastic forks and knives, shopping bags, coffee cups lids, water bottles and take-out containers account for 50% of such plastics annually.

Speaking in Accra to journalists on the relevance of this year’s global theme “Tackling Plastic Waste Pollution”, the Country Director of CUTS Ghana, Mr. Appiah Kusi Adomako said the focus is on the central role that consumers and advocates, government, individual households, and businesses can play in tackling the menace of plastic waste pollution in the capital.

“Although plastics can be a highly useful material in our everyday life, our consumption and production of them have become unsustainable. This trend is impacting our ecosystems and causing negative environmental consequences and threatening our health and wellbeing, hence the campaign” he added.

Mr Adomako proposed a systemic marketplace change at all levels from government, Ghanaians, local and international businesses and standard setters to make tackling plastic pollution and sustainable consumption the easy choice for consumers.

He advised consumers to adopt the circle model of waste management of 7Rs; rethink, refuse, reduce, reuse, recycle, repair and replace to curb the trend.

In his remarks, the Communication Officer of CUTS Ghana, Mr Shadrack Nii Yarboi Yartey also explained that now is the critical time in highlighting, addressing and tackling plastic pollution as the global COVID-19 pandemic adds to the rise of single-use of plastics including face masks, gloves and food packaging. He urged all to join the campaign to address the plastic menace in the country.

Mr Adomako revealed that Ghana is yet to pass the Consumer Protection Bill to law despite calls from Ghanaians for it. He said in 2018, his outfit and Consumer Protection Agency (CPA) launched an e-petition which got 50,000 signatories to get the bill passed into law.

“The New Patriotic Party in their 2016 manifesto promised to pass the bill into law in their first term should they win power in the 2016 general polls. In the absence of a functional consumer protection law, it has made Ghana a junkyard for inferior goods and poor service delivery. If Ghanaian businesses cannot produce goods and services to meet world-class standards, Ghana may not be able to take advantage of the Continental Free Trade Agreement (AfCFTA) and export to other markets where standards are high” he said.

Mr. Adomako is therefore calling on the government to prioritize the passage of the Consumer Protection Bill into law this year to protect the rights and welfare of consumers and rid the country of inferior goods on the market.

World Consumer Rights Day is an annual occasion commemorated on 15th March to highlight the power of consumers and their rights for a fair, safe, and sustainable marketplace for everyone.