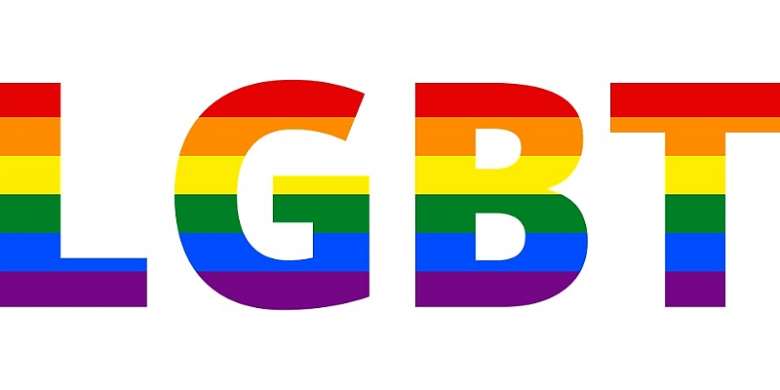 Facebook feels like one big melting pot among Ghanaians. But look carefully and you will see serious differences in how people use and congregate on the platform.

You can tell, if you pay just a little bit of attention, those who come here during their spare time to catch up on/with news, gossip, and friends they don’t see much of, and those who literally live here. Some have made Facebook their home because they have found a way to advance their political careers here, amidst other hustling objectives.

These “full-time facebookers” have so much time on their hands that when they pick fights with those who can only afford to spend their spare time here because they work full-time elsewhere, they always have an advantage, and a large and growing bevy of supporters they have spent ample time cultivating to cheer them on. Those of us who have serious lives off Facebook know to ignore these types. It is not snobbery; it is just common sense.

It is thus natural to expect spare-time facebookers to take more seriously and respond more thoughtfully to other facebookers only if they know them professionally or personally outside these pages. This is also just common sense, not snobbery.

No one wants to be exploited by advantage-seeking operatives when they are only here to broaden their horizon in their spare time. If you already know someone to have a serious vocation, you tend to assume they will engage you with seriousness here on facebook too. After all, they can expect to encounter you professionally or socially at some point, and would thus not cross certain lines.

That is why, despite many random calls for IMANI “to speak on the LGBTQI issue” all over facebook, none of the IMANI executives active here (and many are not) have bothered to make a detailed or comprehensive statement. Most of the people making the demands have so far seemed “unserious”.

Imagine our disappointment then seeing people like George Kesse (who styles himself “Kwame Agoogi”) on these pages, a former “global head of business development” of/at mPharma who now works as a consultant for BroadReach, the respected development consultancy, join the train not merely to pile the pressure on IMANI but to help spread the vile propaganda that IMANI does its advocacy purely for pay. 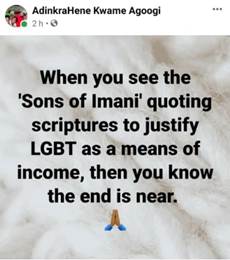 The ridiculous argument that “IMANI is not talking” because it has somehow sold its conscience for money is not only ridiculous and plain stupid for being incoherent (no one pays an advocacy organisation to be “quiet”) but particularly vile and evil, because it is almost impossible to prove that one hasn’t taken money to go against one’s conscience when the people pushing the propaganda don’t have to proffer any evidence at all.

What is even crazier is that in working for the renowned Broadreach, George Kesse/Kwame Agoogi has been able to suppress his so-called Christian animosity for LGBT people by embracing an organisation that in the past 20 years has made tens of millions of dollars in income in the HIV/AIDS space, where provision for LGBT sensitivities and interventions are almost always a requirement for success in winning donor funds from the likes of USAID, PEPFAR etc.

In fact, Broadreach’s work in the HIV space in South Africa would have been much constrained of American and European funding had the organisation entertained the kind of anti-LGBT views that Mr. Kesse/Agoogi is busily pushing on social media today. So why is Kesse/Agoogi not embarrassed to be associated with Broadreach?

During the time George Kesse/Kwame Agoogi was going around touting his mPharma global credentials, was he aware that a big driver of mPharma’s astounding fundraising success was Chamath Palihapitiya, the billionaire Venture Capitalist who has become one of the most ardent pro-LGBT champions in Silicon Valley of late, most recently initiating a campaign with these words:

“We need a wake up call on Sand Hill Road. We need to recapture our potential and open the doors. Invite more people into the decision making: young people, Blacks, Latinos, females, LGBT and others who aren’t necessarily part of the obvious majority.”

Did Kesse/Agoogi disclose his views when mPharma was signing the various non-discrimination pledges and covenants one needs to commit to when raising the tens of millions of dollars it has raised from Western investors?

The problem here is that many of the few “serious” people who have decided to “weaponise” this whole LGBT debate into a means to silence people they don’t like for other reasons, usually motivated at the roots by silly, rabid, NPP-NDC partisan angst, is that most of them will not survive even the most basic scrutiny of their views in the places where they tend to seek legitimation or validation from.

Will someone like Kesse/Agoogi be able to look his Broadreach principals or former bosses at mPharma in the face and spew the tosh he has been regurgitating all over Facebook? No, because he wouldn’t have a career otherwise.

Which brings up the issue of “projection”. These people are projecting unto IMANI fears and anxieties in their own lives.

They claim that IMANI receives funding from pro-LGBT groups purposely to remain silent in LGBT matters. Of course, they cannot make the more rational claim that IMANI is paid by said groups to advocate LGBT goals in Ghana because IMANI has a long, published, record which will show that IMANI never discusses issues of sexuality, marriage, affection or social attitudes, simply because these have not been prominent fixtures in the “public policy tradition” in Ghana.

So, these mealy-mouthed haters go for the batshit-mad accusation of IMANI being “paid to shut up”. Of course, they don’t mention any specific organisations doing the paying, making it impossible to counter or fact-check.

IMANI of course observes the highest standards of advocacy, which means that no one can pay IMANI to shut up or speak up, and no one ever has, but in an environment where accusations need not be backed up, one can shout as much as one want that IMANI has never met an LGBT-advocacy organisation in its 17 years of operation much less taken money from an LGBT-lobby group. It won’t make a dent.

Almost all the hard data about LGBT matters in Ghana comes from overseas organisations. If one does the kind of high-octane policy advocacy IMANI does, one is heavily limited in doing any serious work on LGBT in Ghana in view of the data desert. Except if one is content in dealing in emotional dross.

In fact, before writing this piece, we had to access the Pew Research databases just to get high-level data. With this very broad-strokes information, we can say that Ghanaians, at least as at 7 years ago, are amongst the least supportive of LGBT behaviour in the whole world, but they are also among the most ardently opposed to gambling, abortion and premarital sex globally. What are we to make of that exactly? 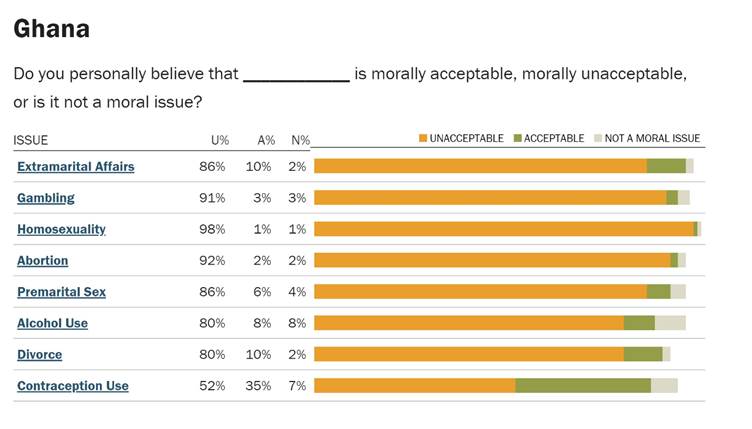 We also learnt, through some deductive analysis, that you can more or less divide Ghanaian opinion and attitudes on the subject by looking at which Ghanaians have spent a significant time in Western Europe or the US studying or working and which Ghanaians have not. This of course underlies the contingency of some of the opinion-divides, but so what?

Then there is the issue of shifts in opinions about LGBT seeming to track per capita income growth etc. Again, what about that precisely? 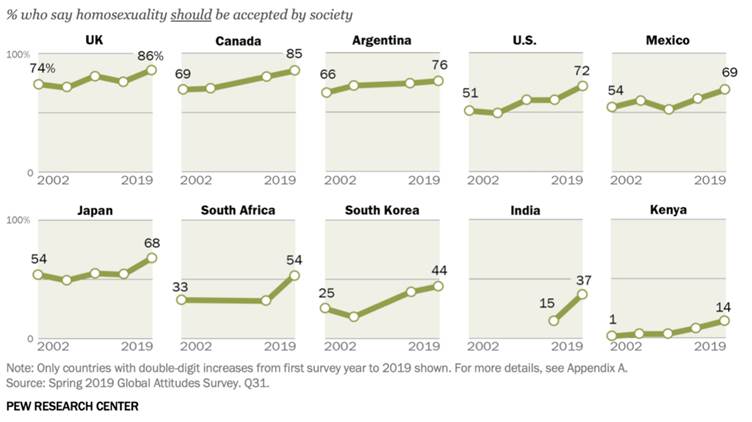 In short, none of these kinds of surface deductions give an organisation like IMANI the ammunition we would bring to a fight like Agyapa or provide us with the depth of insight that one can rely upon to make the wide-ranging policy contributions that IMANI is noted for.

To be clear, in this matter of a pro-LGBT group having opened an office in Accra, what exactly are the public policy issues here? Government should increase budgetary allocation to the BNI/NIB to mount surveillance in people’s bedrooms? Landlords should scrutinise the conformity of renters with the prevailing attitudinal climate by means of a new moral-perception risk database?

Given the paucity of data, especially official data, about the LGBT situation in Ghana, especially touching on areas such as health, education, employment and human security, the airwaves have become filled with emotional dross about the subject.

In such circumstances, it is preposterous to ask serious policy think tanks to intervene and join the charade of pretence-debate, when all that is happening are shouting matches full of sound and fury and no light about anything really vital to national policymaking. Look around you, it is not just IMANI that is “quiet”. Every serious research-based organisation has stayed out because the subject matter does not lend itself too well to their/our instruments.

No, we at IMANI will not, at an institutional level, be tempted to join this emotional jamboree. We shall not be exploited to serve an emerging industry of Agoogism, the shameless projection of fake piety about non-issues to silence critics whose views about other more serious subjects one dislikes.

If our integrity is preposterously attacked by hypocrites like Kesse/Agoogi, however, we shall expose them for the intellectual and moral charlatans they are. For now, that should be enough.