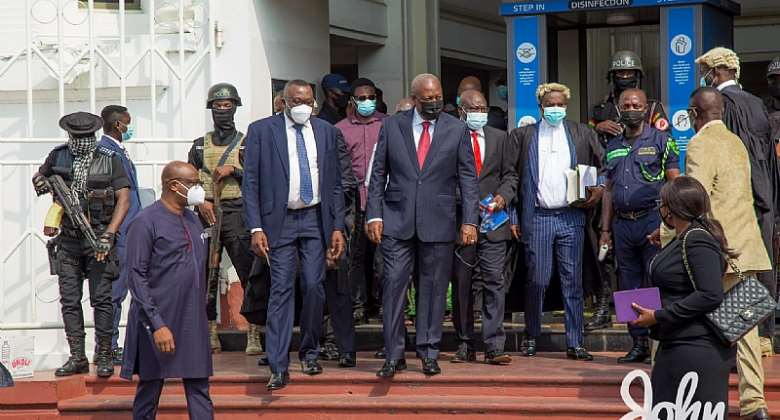 On Wednesday, 3rd February 2021, the Petitioner of the 2020 Presidential election, applied to the Supreme Court to be granted leave to inspect the original documents the 1st Respondent (Chairperson of the Electoral Commission) relied on to declare the Presidential results on the 9th December 2020.

The Petitioner argued further that unlike the 2012-2013 election petition which the request of the Petitioner to inspect original documents was based on “malpractices" that characterised the 2012 Presidential election, the Petitioner in 2021 had not brought any document but was instead relying on the “declaration” of the 1st Respondent, and that the grant of the application will ensure the Petitioner is granted a fair trial (Article 19 of the 1992 constitution). The petitioner also argued that, the inspection of the original documents is on the basis of “transparency and necessity”.

Furthermore, the two witnesses (Asiedu Nketia and Kpessa Whyte) for the Petitioner have admitted in evidence that, they have copies of all the relevant forms but rather chose to tender in evidence ‘samples’ of the documents.

Lawyer for the 2nd Respondent also opposed the application on the grounds that the burden of providing evidence and the burden of persuasion were on the Petitioner.

Meanwhile, the Petitioner did not produce the “carbon copy” of the documents he seeks to inspect to challenge the authenticity of the original documents in the custody of the 1st Respondent. The Petitioner did not provide any evidence of lack of transparency and was seeking to use the application to “conjure away the burden of producing evidence” before the Court. The Lawyer for the 2nd Respondent argued further that the Petitioner’s application did not meet the test of necessity under law and therefore, was completely unmeritorious.

The Justices of the Supreme Court (JSCs) unanimously held that, the Petitioner had not demonstrated that he did not have copies of the documents he seeks to inspect. In addition, the Petitioner’s own witnesses admitted that they have the duplicate documents in their possession.

Nevertheless no proper case had been made to warrant the exercise of its discretion to grant the application and that there had been no issue of authenticity raised by the petitioner. Accordingly, the Supreme Court dismissed the application.

In 2012-2013 presidential election petition, the then Petitioner sought leave of the court to inspect the following original documents of the Electoral Commission;

a. The Results Collation Forms for all the Collation Centres (Constituencies) for the Presidential Election;

b. The Declaration Forms pink sheets for all 26,000 polling stations.

The Supreme Court, JSC Atuguba Presiding, ruled that, "It is our thinking that where a party is already in possession of a copy of a document mentioned in another party's pleadings, it is unnecessary to apply or for the court to make an order for inspection and making copies of the document in question. By virtue of the Evidence Act, 1975(NRCD 323), section 166, the duplicate copies of these documents are admissible to the same extent as the originals in the custody of the second respondent, Electoral Commission.....".(Ruling of the Supreme Court in the 2012-2013 Election Petition.)

And also, Section 166 of the Evidence Act. 1975(NRCD 323) under the sub-heading: "DUPLICATE TREATED AS ORIGINAL" provides that:

"A duplicate of a writing is admissible to the same extent as an original of that writing, unless

(a) : a genuine question is raised as to the authenticity of the original or the duplicate, or

(b): in the circumstances it would be unfair to admit the duplicate in lieu of the original".

On the issue of fair trial and necessity, the law places these under the discretionary powers of the JSCs. And in the opinion of the Justices, no incontrovertible evidence was advanced by the Petitioner to compel the exercise of such discretionary power.

The slant by the Lawyer for the Petitioner in the 2020-2021 trial was to emphasise the differences in the characteristics that was informing the similar request of “inspection of original documents”.

That is, “Malpractices” (2012-2013) and “Declaration” or “differences in the figures put out" (2020-2021). It may connote same or similar meaning in law. The improper, illegal, or negligent professional behaviour in declaring the Presidential results. This also according to the JSCs, could not be proved by the Petitioner to compel the Court to grant leave of the Petitioner’s request.