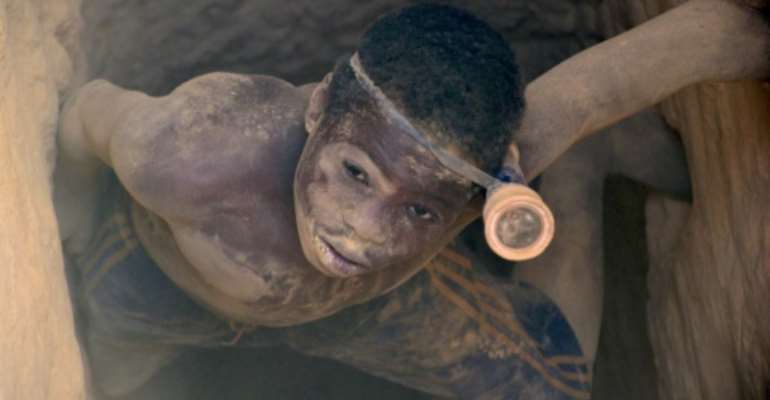 Around 1.5 million people work in unlicensed gold mines in Burkina Faso, according to the mining ministry. By Ahmed OUOBA (AFP/File)

Eight people, including a teenage schoolboy, were killed during an armed robbery on an informal gold mine in southwestern Burkina Faso, security and judicial sources say.

Robbers on Sunday evening attacked the site at Djikando, about 10 kilometres (six miles) from the town of Gaoua, a police officer told AFP late Monday.

'The gang opened fire -- first they shot in the air and then aimed at the miners," he said, speaking on condition of anonymity.

Clashes erupted after the hold-up when local people set fire to the miners' installations, blaming them for causing deaths.

"In all, eight people were killed, including a schoolboy of 15," he said.

The director of medico-technical services at the Gaoua central hospital, Dr Florent Roch Banazaro, said 29 people were being treated for injuries, "mostly caused by firearms and machetes."

The Gaoua public prosecutor, Cheik Alfa Aboubakar Compaore, confirmed a provisional death toll of eight and that "some were killed by bullets and (others) by machetes."

Gold mining has in the past dozen years become a strategic activity in Burkina Faso, a poor country of 20 million people traditionally dependent on cotton exports for foreign currency.

But the artisanal, or informal, sub-sector employs about 1.5 million people, generating additional annual production of around 10 tonnes, according to the mining ministry.

This sub-sector is also exploited by armed jihadist groups, who find it a valuable source of income, according to economic and social studies.

Bordering Mali and Niger, which face considerable strife from Islamic fundamentalists, Burkina has been hit by jihadist attacks since 2015, at a cost of more than 1,200 lives. More than one million people have fled their homes.