Pressure and propaganda - the reality of reporting Xinjiang 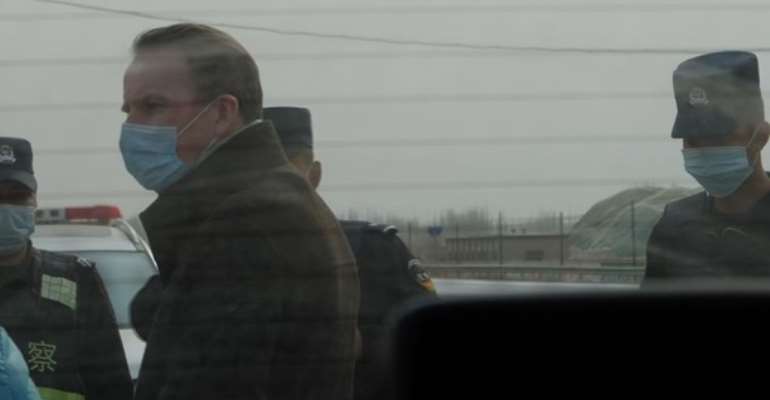 In addition to the heavy restrictions it places on foreign journalists trying to report the truth about its far western region of Xinjiang, China has a new tactic: labelling independent coverage as "fake news".

At night, while travelling for hours along Xinjiang's desert highways, the unmarked cars that had been following us from the moment we arrived would tailgate us at speed, driving dangerously close with their headlights on full beam.

Their occupants - who never identified themselves - forced us to leave one city by chasing us out of restaurants and shops, ordering the owners not to serve us.

Hannah Bailey, who specialises in China's use of state-sponsored digital disinformation at the Oxford Internet Institute, suggests that fiercely critical attack in English, but with Chinese subtitles, makes it unusual.

"It has clearly been produced with both international and domestic users in mind," she told me, "which is somewhat of a departure from previous strategies.

The China Daily report focuses on an altercation outside the front gate of a textile factory in the city of Kuqa, where the BBC team was surrounded by a group of managers and local officials.

The allegations it contains, based on body camera recordings provided by the police who arrived at the scene, are easily dismissed. A polite exchange between our team and a police officer is used to suggest that the BBC exaggerated the role of the authorities in preventing us from reporting.

But the China Daily chooses not to mention that some of our footage was forcibly deleted and we were made to accompany the same police officer to another location so she could review the remaining pictures. And it provides no explanation of the wider context, nor gives the BBC any right of reply.

Over a period of less than 72 hours in Xinjiang we were followed constantly and, on five separate occasions, approached by people who attempted to stop us from filming in public, sometimes violently.

In at least two instances, we were accused of breaching the privacy of these individuals on the basis that their attempts to stop us had led them to walk in front of our camera.

The uniformed police officers attending these "incidents" twice deleted our footage and, on another occasion, we were briefly held by local officials who claimed we'd infringed a farmer's rights by filming a field.

China's propaganda efforts may be a sign of just how damaging it believes the coverage of Xinjiang has been to its international reputation.

But attempting to attack the - usually censored - Western media at home carries some risk, in that it can reveal glimpses of stories that would otherwise remain out of the public domain.

A satellite photo, dated May 2019, shows a large group of people being moved between the Kuqa textile factory and a re-education camp located next door, complete with a watchtower and internal security walls.

The China Daily, which refers to the camp by the official terminology as a "Vocational Training Centre" suggests our attempt to film was pointless because, they say, it closed in October 2019.

If true, this simply proves that the camp was operational when the image was taken - and confirms it to be compelling grounds for further investigation.

Now Chinese and Western audiences alike can ponder who the people in the photograph were, why they were being moved between the camp and the factory and whether any work they did there was likely to be fully voluntary. (BBC News, Beijing)