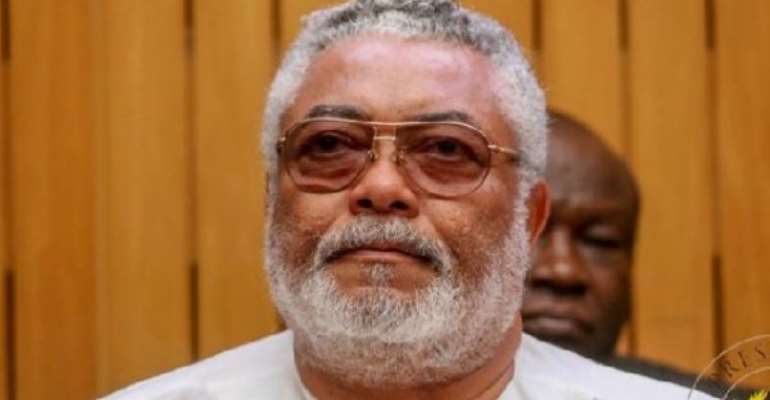 As the nation prepares for the funeral of late ex-Jerry John Rawlings from Monday, January 25, Parliament has insisted that his values of probity, responsibility, discipline and accountability be embedded in the national psyche.

Eulogising the former President by the legislators on Friday, Mr Haruna Iddrisu, the Leader of the National Democratic Congress Side, set the tone by describing late President Rawlings as a “paradox or enigma,” with an enduring institution of values that would continue to define the people and guide the progress of the nation.

Clad in black or brown attires, members from both sides of the House extolled the bravery, forthrightness, discipline, love and fairness of the affable former Ghanaian Leader, popularly called “Papa J”, who passed on Thursday, 12th November, 2020, at the Korle-Bu Teaching Hospital.

He was a Ghanaian Military Officer and politician who led the country from 1981 to 2001 and also for a brief period in 1979.

He led a military junta until 1992, and then served two terms as the democratically elected President of Ghana from 1992 to 2000.

Upon his unexpected death, the nation and the international community went into shock, and in the tributes, recognized him for the many contributions to Ghana's growth, especially as the Founder of the Fourth Republic.

They encouraged Ghanaians to live peacefully and dialogue with one another despite their political differences.

Speaker Alban Sumana Kingsford Bagbin, who later gave the chair to Second Deputy Speaker, Andrew Asiamah Amoako, and later resumed the chair, allowed contributions that took longer than the usual time, as the legislators remembered the late political icon for ensuring political stability, democratic governance, and smooth transfer of power in all the times he was in office.

Mr Iddrisu said the Late President's commitment to justice, equity, probity and accountability and transparency was unparalleled and those were the values and principles that found expression in the preamble to the 1992 Constitution, which was promulgated under his able leadership.

The Constitution remained the most enduring constitution since the birth of Ghana, surviving almost three decades and seeing the transition of power from one political party to another, he said.

Mr Iddrisu went down memory lane to recall how former President Rawlings came into the political space on 15th May 1979, driven by a mission to have the political leadership at the time to account for their misrule.

In his view, the Military administration at the time had completely desecrated the Military Code of Conduct and sunk the image of the country.

Mr Iddrisu said with determination and zeal, former President Rawlings was able to reverse the socio-economic decline and restored the economy back on track, with infrastructure being improved and power from the Akosombo Dam extended to all the then 10 regions and the 110 district capitals.

“The pride and belief in Ghanaians was restored and most Ghanaian professionals who left the shores began returning to help build the country,” Mr Iddrisu said.

“Rawlings sowed his leadership role to be a watchdog for ordinary people and he addressed problems of incompetence, injustice and corruption.”

Mr Kofi Adams, a former Aide to the former President, and debutant Member of Parliament for Buem, said it was very difficult for him to pay tribute to his boss, as he would have wished he was alive to see him make his first statement on the floor of Parliament.

He spoke about courtesies that were withdrawn from the former President, especially during his travels, and said that should never be repeated.

Mr Adams said though humiliating, the former President did not get offended at the treatment but used the opportunity to interact with the ordinary people.

“He was courageous but very humble,” he said, and that his passion for decentralisation, infusing tradition, culture and governance, and the passage of the Intestate Succession Law to help widows would not go unnoticed.

Late President Rawlings will be laid in state from January 24 to 26 at the Foyer of the Accra International Conference Centre from 0900 hours to 1700 hours daily.

Meanwhile, Majority Leader Osei Kyei-Mensah-Bonsu has announced in the Business Statement for next week that Members of Parliament were to file past on Tuesday, January 26.