Akufo-Addo must be swift in reshuffling ministers – Prof. Gyampo 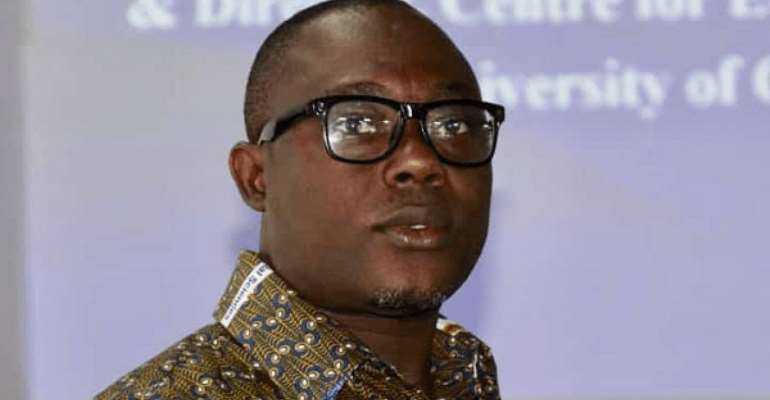 University of Ghana lecturer, Professor Ransford Gyampo has insisted that President Akufo-Addo must be swift in reshuffling his ministers in his second term when the need arises.

In his first term as the President of the Republic of Ghana, H.E Nana Addo appointed 110 Ministers with the opposition labeling his government as ‘elephant-sized’.

Surprisingly, unlike past governments where occasional reshuffle of ministers was the norm, the practice was rare under the President with many attributing it to the poor performance of some ministers.

Following the nomination of a new set of ministers by President Nana Akufo-Addo for his second term, Prof. Gyampo in a write-up has indicated that the stability of government in the last four years had its bad sides.

According to him, it led to some Ministers disappointing the President, and hence he must be ruthless in reshuffling in his second term when necessary.

“....I conclude by saying that the previous government of President Akufo Addo may be reputed as the most stable in the history of the Fourth Republic. This may have its good sides. But, clearly, some ministers disappointed him.

“Others embarrassed him, while a number of them also caused disaffection for him and the party as a whole. As the President seeks to leave a legacy, he must be swift in reshuffling his team when necessary to bring out the best in them for Ghanaians,” part of the write-up from Prof. Gyampo reads.

Meanwhile, the lecturer has stressed that reducing the number of ministers from 110 to 85 is still a lot and further cut down should be considered.

Read the full write-up from Prof. Gyampo below:

1. The outcome of the 2020 Election, was a victory with a taste of defeat for the NPP, as I predicted two weeks to the election. A government like that of President Akufo Addo, that is interested in leaving a legacy and securing electoral fortunes for its political

party, must do something noticeably drastic to send a clear message, that lessons have been learnt from the resounding voice of the populace, as clearly articulated in the last election.

2. In terms of size of government, an optimum size of 40 would have been felt by all as a drastic response. But it is rumored that the size of government in the next administration is likely to hover around 85. This to my mind, is still big. President J.A. Kuffour vehemently criticized President Jerry Rawlings for appointing 82 Ministers in the lead up to the 2000 elections. But when he (Kufuor) became President, he appointed 88 ministers. President Atta Mills downsized the government to 75 Ministers and we still criticized him. President John Mahama increased the size of government to over 90 Ministers (including his three or five wise men) and we used this as a campaign tool against him. President Akufo Addo ballooned the size to over 120 ministers and maintained this number in spite of several calls for downsizing.

3. Even though it may be commendable that the size of government may hover around 85 ministers in President Akufo Addo’s second term, the number is still huge. Japan used to run the world’s third largest economy with 17 ministers. UK has less than 30 Ministers and the US has less than 40 ministers. Similarly, South Africa and Senegal have less than 40 ministers. Why is it that many of these countries that are richer and more populous than us, run a lean governments? Available scholarly research all over the world, show a predilection for lean or optimum government, that synchs with national wealth and population, as big governments tend to gobble the scarce resources that must be used to implement pro-poor policies.

4. So, at a future date, the President may consider the following suggestions to beat down the size of his government further, as he strives to leave a good legacy:

5. If possible, the Information ministry must be scrapped. After all, apart from the Vice President and Kojo Oppong Nkrumah, no NPP functionary better informed the public about anything in the President’s first term. Kojo Oppong Nkrumah may simply be a Presidential Spokesperson without a whole ministry created for him.

6. The Ministry of Parliamentary Affairs must also be scrapped. It is undemocratic and undermines the principles of separation of powers and checks and balances. It is a needless attempt to make the parliamentary arm of government subservient to the executive. In 2005, the African Peer Review Mechanism (APRM) of NEPAD, made a similar recommendation, but President Kufuor ignored it. President Mills scrapped that Ministry in line with the APRM Report, and for eight years, that ministry never existed. But President Akufo Addo brought it back in 2017. Given the kind of hung parliament we have, it would be an exercise in futility for anyone to attempt to make parliament subservient to the executive. It wouldn’t work. A liaison Officer may simply be appointed to liaise between the executive and the legislature without having a whole ministry.

8. Railways provide a means of transport to the citizenry. The Ministry of Railway Development can be subsumed under the Transport Ministry

9. The Ministry of Sanitation and Water Resources may be scrapped. The District Assemblies must be empowered to go back to their traditional “saman-saman” sanitation role, which they performed creditably in time past. The Water Resources bit of the ministry may simply be added to the Natural Resources Ministry.

10. Pluralism is a cardinal feature of democracy. There is no need for a whole Ministry in charge of Chieftaincy and Religious Affairs. The fact that chiefs are unwilling to close their ranks in presenting a united front as important countervailing traditional bodies; and the fact that our religious bodies continue to remain amorphous, does not necessarily create any space for a whole governmental sector ministry. The frontiers of the state must not be expanded to cover chieftaincy and religious matters. Let the National House of Chiefs and Religious Bodies deal with their own issues.

11. What does the Ministry of Employment do? Do they offer employment? Can any graduate walk there in search for job? That ministry must be scrapped too. The National Labor Commission may be empowered to deal with all labor related issues. Matters of employment are cross sectoral and must remain so.

12. The Ministry of Public Enterprises may not be a useful introduction at this crucial time when there is much talk about rolling back the frontiers of the state and downsizing government. State-Owned Enterprises must be depoliticized and appointments into them, must be based on the Weberian conception of meritocracy. This would necessarily reinvigorate them to work, without a whole ministry to take charge of them.

13. Finally, if there is a Minsiter for Works and Housing, there may be no need to have another minister of state in charge of works and housing, in our current downsizing regime.

14. I conclude by saying that the previous government of President Akufo Addo may be reputed as the most stable in the history of the Fourth Republic. This may have its good sides. But, clearly, some ministers disappointed him. Others embarrassed him, while a number of them also caused disaffection for him and the party as a whole. As the President seeks to leave a legacy, he must be swift in reshuffling his team when necessary to bring out the best in them for Ghanaians.

If the petition for re-run of the elections at the Supreme Court succeeds, these suggestions may be relevant for President Mahama if he wins. If it doesn’t succeed, then may the second term of President Akufo Addo mark an era of quality government, that leaves a good legacy and translates into developmental outcomes that tangibly reflects in the life of every Ghanaian. I will be around to scrutinize whatever happens in the next government, not out of malice, but for the purposes of keeping the regime on its toes.

Manual on COVID-19 vaccination being developed for public se...
7 minutes ago