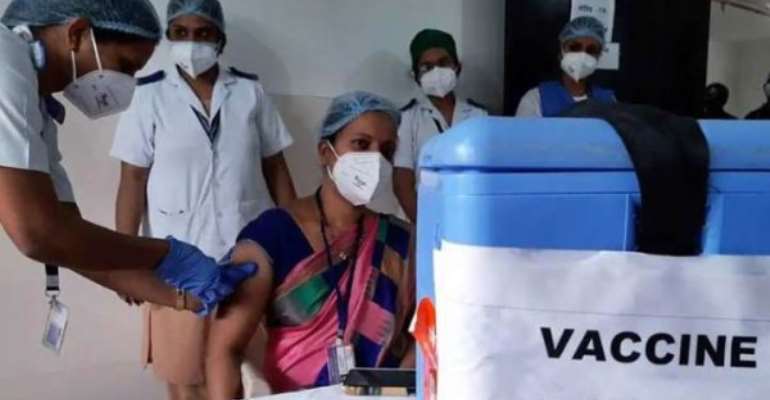 India on Saturday started inoculating health workers in what is expected to be the world's biggest coronavirus vaccination programme.

A health worker at a government hospital in Delhi became the first person to receive a vaccine shot in the country of 1.3 billion people, shortly after Premier Narendra Modi kicked off the year-long campaign with a nationally televised speech.

India plans to vaccinate 300 million people - nearly equal to the entire population of the United States - by the end of July.

"India is today launching the world's biggest vaccination programme. Never before has this type of vaccination and such a large-scale vaccination campaign been run in history ... It shows the world our capability," Modi said in his address.

An estimated 30 million doctors, nurses and other front-line workers will be the first to get the vaccination, followed by 270 million people aged over 50 or deemed high-risk.

At over 10.5 million infections, India has recorded the second-highest number of Covid-19 infections in the world, after the United States. India's coronavirus death toll stands at 151,918.

Some 300,000 health workers were to receive the shots on the first day of the vaccination drive, which federal health minister Harsh Vardhan said was “probably the beginning of the end” of Covid-19.

The vaccination drive began at 3,006 sites; mostly state-run health care centres as well as government schools and municipal offices being converted to temporary vaccination centres, with each site inoculating 100 people, government officials said. This number will be ramped up to over 5,000 sites as the programme progresses.

“There is relief as well as excitement. We are very lucky to get the vaccine, being part of the first line of defence against the virus,” Anubhav Sharma, a doctor at Delhi's Lok Nayak Hospital, who received the jab, told broadcaster NDTV.

“The past few months have been full of worry. We will be more confident in dealing with patients and provide even better care now.”

Modi urged Indians not to believe “propaganda and rumours” about the safety of vaccines, amid controversy over locally produced Covaxin, which has been cleared for emergency use while still in clinical trial.

“The Drug Controller gave approval after they were satisfied with the data of the two vaccines. So stay away from rumours,” he said. “Our vaccine developers have a global credibility. Life-saving vaccines given to 60 per cent children globally are made in India.”

The Covid-19 pandemic has upended lives, battered an already slowing economy and resulted in unprecedented suffering in India, which saw some of the strictest lockdowns in the world.

Modi appeared emotional as he reminisced about the difficult times India went through, choking up when he spoke about people who could not perform the last rites of their loved ones, those who were separated from their families and the elderly who died in isolation.

“Today when we take a look at the last year, we realize that we have learnt a lot as individuals, family and nation. I want to remember those days when the disease kept people away from their families.

Mothers wept for their children, but couldn't hold them. Old fathers fought the disease alone in hospitals, their children could not help them. It makes me extremely sad.”

The vaccine rollout begins after months of preparation including the setup of cold storage chains, three vaccine delivery trial runs in different parts of the country and the development of software to track real-time information on vaccine stocks, their storage temperature and vaccine recipients.

India is using its experience of holding mammoth elections, as well as its huge annual immunization programme for pregnant women and newborns, for its Covid-19 vaccination campaign.

India has plans to offer 20 million doses to its neighbours, with the first batches shipped over the next two weeks, Bloomberg news agency reported. The government will then offer the vaccines to countries in Latin America, Africa and the former Soviet republics.