The next Speaker of Parliament 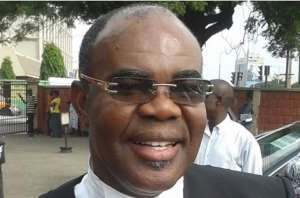 With the term of the present Speaker of Parliament ending on January 06, 2021, the question of who becomes the next Speaker is paramount. Apart from Justice Daniel Francis Annan who served two terms, all others served for one term.

His Excellency Nii Ayikoi Otoo served as Attorney-General and Minister of Justice under President Kufuor. During the period, he led Ghana’s Delegations to International Arbitrations which were all successful. After serving as Attorney-General and Minister of Justice, he was appointed once again by President Kufuor to serve as Board Chair of The State Insurance Corporation. He set up his own Chambers known as Otoo & Associates - Leo Chambers in 2007 and became Master thereof.

As a legal practitioner in Ghana, he has handled many high-profile cases, some of which have been reported in the Ghana Law Reports (GLR), as well as the Supreme Court Ghana Law Reports (SCGLR) and other Monthly Law Reports published in Ghana. Some of these high-profile cases include The Supreme Court Contempt Case against the late Kwadwo Owusu Afriyie, popularly known as Sir John, the then General Secretary of the New Patriotic Party (NPP) during the pendency of the famous 2012 Election Petition. The mastery and diplomatic manner in which His Excellency Nii Ayikoi Otoo handled the case before the Judges ensured that their Lordships’ injured feelings was assuaged, thereby freeing Sir John from a custodial sentence.

The next high-profile case he argued was the disqualification of Dr. Paa Kwesi Nduom, a Presidential Candidate in the run up to the 2016 General Elections in Ghana. His Excellency Nii Ayikoi Otoo as counsel for Dr. Nduom successfully overturned the Electoral Commission’s decision at the High Court. Though the Electoral Commission took the matter to the Supreme Court the decision was affirmed. The case won His Excellency Nii Ayikoi Otoo international admiration and congratulatory messages poured in especially from within the Commonwealth.

His Excellency Nii Ayikoi Otoo has been a political and social commentator who appeared on many television and radio discussion programmes in Ghana. He has also published Articles in two (2) popular Ghanaian Newspapers. In addition, he has published learned Articles in “Your Health Guide Magazine” on Medico-Legal Topics in Ghana and in the “Banking and Finance Law Journal” of Ghana. His Excellency Nii Ayikoi Otoo served as a guest on a Law programme called “Obonu lawyer” on Obonu FM dedicated to Ga Dangme language listeners for four (4) years, explaining the law without receiving any honorarium.

He served with distinction and great admiration as Ghana’s High Commissioner to Canada and the many citations and testimonials written about him by the Diaspora Community attest to his diplomatic skills and the fact that he was held in very high esteem by the community.

With a hung Parliament and the unfolding political contest for leadership of the next Parliament, there will be the need for mediation and negotiations, and I can see Nii Ayikoi Otoo as the personality to hold the scales evenly balanced to enable Parliament to work effectively and efficiently.

I believe His Excellency Nii Ayikoi Otoo can be relied upon as a trusted and experienced legal, political, and affable luminary to bring both sides of the aisle together in the interest of Mother Ghana.