Bright Philip Donkor: Enough of the vilification on Joy FM 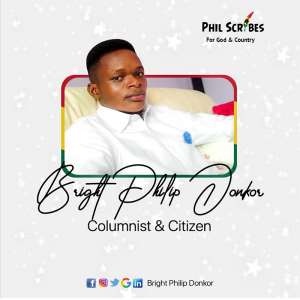 Let me hasten to say that my pen does not write for any political party. However, I write to give honour to whom honour is due and to condemn respectively. But as certain as the annual spillage of the Bagri Dam, I am well prepared to receive the turbulent missiles that would be thrown at me by whoever thinks this piece pains him like the sting of black ant in the buttocks.

Virtually everywhere, there’s unfair condemnation about the Multimedia Group - Joy FM. My heart bleeds and I become irate whenever I hear people, mostly the main opposition party and other political parties in the country talk about the media house in a manner that is both nauseating and lurid.

What they often spew is beyond my tolerance threshold, hence the need to say something. I do not see myself as any expert and hey, I’m an undergraduate student. But I am shocked some people entertain and accentuate these partisan prejudices and thoughts.

I call it blissful ignorance and a narrowly defined partisan spirit whenever people spew unsubstantiated allegations and accusations about Joy FM. I have followed Joy FM all my adult life and I can say they’re one of the best media organisations in the world. They’re not perfect and they have their biases. But they’ve put themselves on the line for truth, God and country countless times. I believe that it’s better to put emotions aside and be fair to people and institutions.

I find it difficult to understand why some people are saying that the conscience of Joy FM has been bought for a hatchet job in this year’s elections when they’ve no proof at their disposal. It’s advisable that such people subject their conscience to checks too because they cannot taint other people’s integrity without proof.

Joy FM is a great media organisation, which is not a pushover FM. Joy FM is a social media radio and it works professionally. I’ve been a discerning listener of Joy FM and I can attest it that during the erstwhile NPP – Kufuor’s regime, this same Joy FM scrutinised NPP and objectively opined a lot of questionings to their officials and fans alike. And Joy FM did not sweep the sins of NPP under the carpet.

It was this same Joy FM which announced the defeat of the NPP and made it public that Atta-Mills and NDC are winners at the end of the 2008 second round of elections. During that time most NPP top guns and officials called Joy FM ‘‘NDC Radio and Ewes FM Station’’.

On this note, I would like to ask a simple question: Do you think all presenters, reporters, talk host, producers, newscasters, technicians or other employees of Joy FM- all are fans of NPP? Can that happen? Leave Joy FM alone and cut them some slack! And allow them to do their work professionally. They are helping, reshaping and rebuilding Ghana and without fear or favor Joy FM would keep on putting both NPP and NDC on their toes.

In point of fact, I have learnt a lot judging from my favorite programme, News File. Issues like in-depth corruption and the strategies adopted by presidential candidates in the 2000 general elections campaign were discussed thoroughly which made me to understand what corruption was all about, the root cause of it, its effects and how to uproot it.

Again, the program discussed various presidential candidates’ campaign promises and the issue of corruption and they will deal with corruption when elected as president with inputs from academicians, economics and finance experts which informed my sense of decision and broadened my horizon.

One important point we must bear in mind and appreciate is that once again this year’s elections, Joy FM dubbed, ‘The Election Headquarters’ programme- a 30minute presentation on The Super Morning Show at 7:30, Midday News at 12:30 and Newsnight at 6:30pm which provided daily updates on election-related issues with focus on the campaign issues, voter concerns and expectations.

They lined up programmes to accommodate all the election-related issues giving listeners a wide-range of updates of political developments throughout the day right from the morning on Super Morning Show through to the Mid-Day News and other news analysis programmes. No wonder, they were singled out for praise by election observers on how the station’s team of reporters relayed polling station results back to the station directly on air. Kudos Joy FM!

All these sacrifices were made to enable the public to tally the results in the comfort of their homes and offices while they remained glued to their radio, TV, laptop or powerful mobile device monitoring the elections. They risked their lives to bring us the news. Can you imagine being in their shoes? I salute them!

Joy FM continues to set pace in election reporting. The years spent following Joy FM has never gone down the drain. Except on few occasions where there are few errors, professionalism has always been their hallmark. Joy FM has been consistently critical to every government when the right thing is not done. We shouldn’t always allow partisanship cloud common sense and let’s exhibit fairness to people and institutions. Long live Joy FM and its partner stations in the Multimedia Group, along with scores of affiliate stations across the country.