Macron thanks Egypt's Sisi for support after anti-French 'hate campaign' 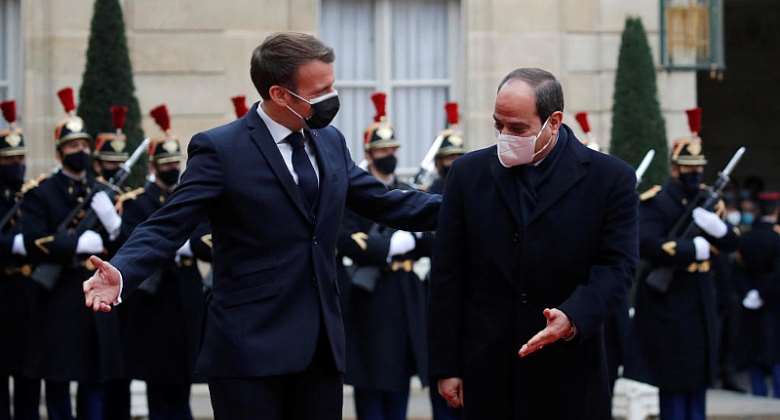 Emmanuel Macron has thanked visiting Egyptian President Abdel Fattah al-Sisi for his support following what the French president described as an anti-French "hate campaign" in parts of the Muslim world. He also rejected calls to get tough with Cairo over its rights record, saying trade relations would not be conditional on freedoms in Egypt.

Macron was speaking at a joint press conference with Sisi following talks between the two leaders at the Elysée Palace on Monday morning.

Sisi arrived on Sunday for a lavish three day state visit marking the increasingly close relationship between France and Egypt, under the secular rule of former army general Sisi.

The two countries have common interests in the Middle East and a shared suspicion of Turkish President Recep Tayyip Erdogan.

Sisi's visit to France has nevertheless sparked the ire of some human rights groups.

Asked at today's press conference why he did not make aid and trade deals with Egypt conditional on respect for human rights, Macron said that "a policy of challenging dialogue" was more effective than "a policy of boycott".

The French president said he would not link co-operation on defence or economic matters to these disagreements and stressed that he did not want to "end up reducing the efficiency of our partners in the struggle against terrorism and for regional stability".

However, Macron said he had raised several specific individual cases with Sisi, including Ramy Shaath, an Egyptian-Palestinian rights activist who is married to a French woman. Human rights groups say he was detained arbitrarily over a year ago and remains in detention.

No place for death threats and hate speech

The French president also declared that France and Egypt both wished to "create a civilisational space" where there was "no place for death threats and hate speech in response to the simple expression of freedoms".

In October, there were calls from some in the Muslim world for a boycott on French products after Macron defended the right to satirize religion in France.

Macron spoke out at a service in honour of French schoolteacher Samuel Paty who was beheaded by an Islamist terrorist because he showed his pupils cartoons of the Prophet Mohammed as part of a class on freedom of expression.

The situation in Libya, where efforts are underway to agree a lasting peace after years of conflict, was also discussed.

No major deals are expected to be signed during this visit but Egypt is a major client of French weapons companies and has in the past bought fighter jets and warships.