The diamond scandal that helped bring down France's Giscard 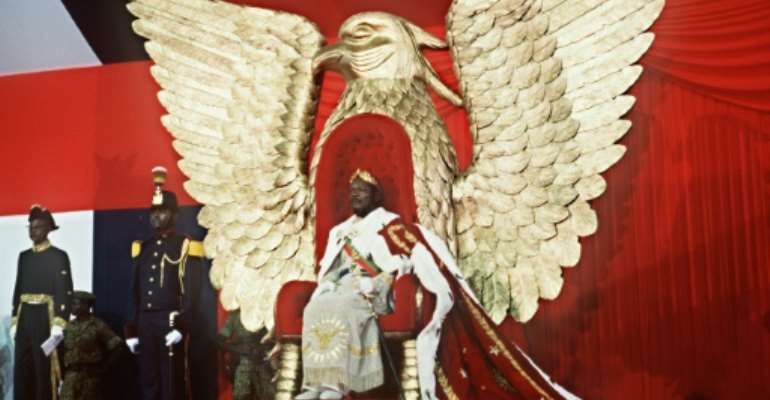 Jean-Bedel Bokassa crowned himself emperor in 1977 and said he showered the Giscard family with diamonds. By PIERRE GUILLAUD (AFP/File)

Valery Giscard d'Estaing, who died on Wednesday, was defeated in France's 1981 presidential election partly because of diamonds he received from a self-appointed emperor in a former French colony.

Satirical newspaper Le Canard Enchaine began reporting in late 1979 that Giscard had received a diamond platter from Jean-Bedel Bokassa six years earlier, when he had been finance minister.

Bokassa had taken charge in the Central African Republic in 1966 and eventually crowned himself emperor -- presiding over a bloody period marked by a massacre of schoolchildren -- before French forces toppled him in 1979.

Le Canard later claimed the platter was worth one million francs and that Giscard had also received diamonds when he visited the landlocked country's capital Bangui between 1970 and 1975.

Giscard responded with a "categorical and contemptuous denial" of allegations concerning the value of the gifts he received, saying: "We must let base things die of their own poison."

The weekly returned to the charge in 1980, publishing a telephone interview with Bokassa almost a year after he was deposed in which he claimed he had given the presidential couple diamonds on four occasions.

"You can't imagine what I have given to that family!" he told Le Canard.

Giscard told state television in March 1981 that there was "no mystery in the affair of the diamonds", adding: "The proceeds from these gifts were donated for humanitarian work in the Central African Republic."

Beneficiaries included the Central African Red Cross and a maternity hospital, he said.

After viewing accounts concerning official gifts at the Elysee, France's presidential residence, the weekly Le Point reported the same month that the diamonds had been sold for 114,977 francs to be donated to humanitarian causes in the CAR.

In an interview published by the Washington Post in May that year, the toppled Bokassa repeated that he had given diamonds to Giscard four times in eight years, in the presence of witnesses.

While Giscard described the diamonds as small stones, Bokassa said they ranged in size from 10 to 20 carats.

Giscard's family, including two cousins, had been showered with diamonds more than anyone else, Bokassa told the paper on the eve of the second round of a presidential election in France.

"I spoilt them," he claimed, adding: "They are rotten."

"I'm settling my scores with those who brought me down," he railed, openly determined to undermine Giscard's chances of another term in office.

On May 10, 1981, the socialist Francois Mitterrand was elected on a groundswell of popular support. He remained in power until May 1995, the longest-serving head of state in French history.