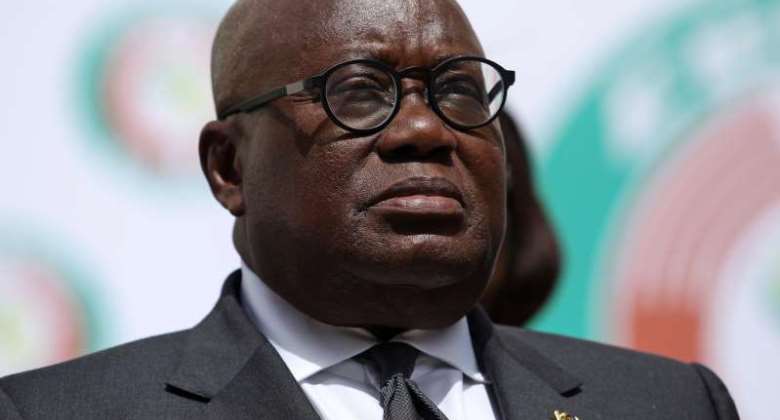 “The most important office, and the one which all of us can, and should, fill, is that of private citizen.”

AVE PRESIDENTE! SALUIT, MONSIEUR LE PRESIDENT! HOSANNA TO THE KING! When the three witches proclaimed before Macbeth: “All hail, Macbeth, King hereafter”, and said the same words to Fleance, both of them ended up consumed by the revelation to do acts of infamy that ended their lives abruptly. So, we decided to go religious and say 'Ave' like 'Ave Maria' (Hail Mary), simply because Nana Addo Dankwa Akufo-Addo is winning the December 7, 2020 election hands down.

The NPP has kept faith with the people, and the December 7 election is simply going to be, as the NPP calls it, “Thanksgiving Election”. It is to thank Akufo-Addo for promises kept and delivered. Mahamudu Bawumia, the Vice-President answered Joshua Akamba, NDC National Organiser's 14 questions to him while they were in the Upper East Region, calling Bawumia a “serial liar”, including lying about “Ghana Beyond Aid” account raised during the Year of Return. Bawumia said they were building the nation, not infrastructure. As noted by the Minister for Zongo and Inner Cities, Alhaji Dr. Mustapha Hamid. NPP has kept faith with the people. There are verifiable social interventions which include introduction of NHIS, free maternal care, capitation grants, school feeding, Planting for Food and Jobs, One Village One Dam, One Constituency One Ambulance, roads, hospitals, schools…”

In the case of the NDC, they had promised to build mortuaries for the Zongo communities and legalise 'okada' operations. Dr. Hamid continued: “Now John Mahama who opposed the Free SHS, is subjecting himself to the public ridicule by claiming that he was the one who introduced the Free SHS. Mahama, who is fond of saying something tomorrow and turning round to say that he did not say that.” It is not surprising, though, because Mahama had said in the Volta Region in June, 2020: “As politicians, before the masses can accept you and endorse you, you will have to do the unthinkable. You have to go beyond what you yourself believe you can do. If you have to lie to them, you do so, and this is our way of doing things as political actors.” How? So, for all Mahama's stay in Commonwealth Hall, he did not learn of John Donne's edict: “On a huge hill, cragged and step, Truth stands, and he that will Reach her, about must, and about must goe…” So, how can one tell whether Mahama will build those mortuaries or legalise okada which he himself abolished earlier? Or is it a “lie” like promising “one-time premium” for NHIS and not carrying it through?

We hear the Political Science Department of the University of Ghana, led by our classmate, the respectable lecturer Kaakyire Duku Frimpong had predicted a 51% NPP win. And veteran Ben Ephson had predicted a 52% NPP win. Then, we, without any enviable research tools predict a 56.6% win. We saw the figure six which Numerology says stands for family, home, harmony, nurturing, idealism and healing. No wonder, NDC has shot these predictions down. Sammy Gyamfi, as predictable as he is, says the Political Science Department has not conducted any survey. We have been students at the Department before (at a high level) and we know most of the lecturers, and we can vouch for the credibility of Kaakyire Duku Frimpong.

The research carried out in November 12 to 22 spanned 100 constituencies across all the 16 regions with 11,949 respondents out of a target of 12,000 in a random sampling method. 51.7% said they would vote for Nana Akufo-Addo, while 40.4% said they would vote for Mahama. The survey also revealed that 53.5% of respondents believed that the NPP-led government had delivered on its promises made at the 2016 campaign period. On the social media platform, Yaro thinks: “The ground is fertile for NDC”; Charles believes “The NDC can't get above 40% this year” and Simon Bokor guesses: “The Political Science Department of UG has just joined the league of Owusu Bempah's”. We remember American Trump!

To make the predictions come true, it is necessary to get a massive turn-out. Though the supply of T-shirts and other paraphernalia has delayed, it is always “better late than never.” The President is in Kumasi for a three-day campaign tour. Peggy Noonan says: “Our political leaders will know our priorities only if we tell them again and again…” Supporters of the NPP get irritated when they are reminded of the circumstances leading to the resignation of the Citizen-Vigilante ABK Amidu as “Special Prosecutor” and the fire-works which followed. They would wish the “Agyapa Deal” were properly handled, and they would desire that the 500 bulldozers which were reported missing would be retrieved. To the credit of Nana Akufo-Addo, he has shelved the differences he had with JJ Rawlings, and has promised to hold an enviable state funeral for him.

At 62, Mahama is growing – no more a young man. If he had been living at the time of Rawlings's Revolution, he would have been a target of the Revolutionary fervour – kill all persons over 40 years. We have no sympathies for Mahama's apparent loss: winning the Assembly elections, winning the Bole Constituency elections as an MP, being made a Deputy Minister, then Minister, becoming a Vice- President, then a President… haba, what does this man want again? He has told the world how his rich father took him to the north to enjoy free education, and he and his siblings were fighting over who uses an “air-conditioned” tractor! Not surprising, with his advisers being such political neophytes as Sammy Gyamfi, what can we expect? Mahama will order a vuvuzela player to leave a rally; and the noisy okada riders…? Sammy Gyamfi would prune the military if they come to power! They have heard you.

But the NPP must be careful about how they treat their supporters. Who does not know “the young shall grow”? What about “the old will die”? If the NDC “create and loot”, they, at least, “share”. Persons, who lost their jobs, sacrificed their wealth, et cetera in 2008, 2012 had been sidelined. Those running the affairs of state regard those outside as meddlesome and importunate. Classmates would not even pick their calls. The NPP should count itself lucky because some people have their roots in UP, NLM, PFP/UNC… They have nowhere to go. For them, it is “my party right or wrong”. Those standing as “independent candidates” are strongly advised to rescind their decisions, and “toe the party line” (dee osono gyina no na ne ba gyina ho). Wherever the elephant is, the baby elephant (calf) will be there. No apathy voting!

We may not be like Washington Irving's hero Rip Van Winkle who drinks the Dutchmen's liquor and falls asleep at Catskill Mountains only to wake up 20 years later to find that he has become an old man; the American Revolution has been won; his wife has died… he goes back to his old ways, idling his time away. We are not as forgetful as Mahama proclaims us to be.