Wake Up, You Slumber! 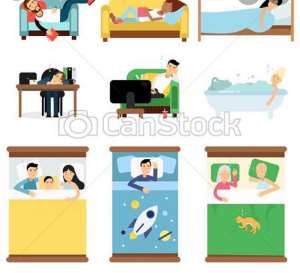 Who sleeps now when the world is losing it worth? Who sleeps when world leaders and billionaires have taken the world into their own hands, setting unbiblical standards for us to follow?

Who stays oblivious to what technology is making us become? Have you imagined what effect it will have on mankind in some few years to come if it hasn’t begun already? Oh, awake you slumber!

This is not the time to sleep nor be ignorant of the happenings of today, your future and eternity depend on it. The time to stay awake is now as you take the bull by the horn. Grasp your own life and own it. Every decision of yours should be a thorough one with you in control. Stay alert and be focused.

We are on the verge of losing our identities whether black or white. But how? The mask revolution is here. A group of people through their handy works (which is good) have been able create this mask which I thought were for movies alone but have been proved wrong.

These masks have the exact features of a human, being it white or black, old or young, man or woman. It’s worn from the head and rest on the chest with hairs exactly like that of human both white or black.

Whoever wears it is completely unidentifiable and this raised my brows to do this piece. In case of armed robbery, the black guy could pick a white mask and vice versa. Police investigations could go wrong because even when the faces are captured, no system could match up the looks making culprits move freely and still threatening the lives of humans.

In the bid of this guy trying to woo this girl, he could pick a handsome looking mask, and easily have his way which could go a long way to even marriage and the act of deceiving could go on and on as long as possible.

These group of friends cold believe they are all white or black girls or boys, when in fact one or two of them have a male or female mask on. It could be for prank but some jokes could really be expensive.

It will be a season of imposters as you will believe you are interacting with your kind, when actually, it’s a wolf in sheep’s clothing. Many accounts will be emptied, vacancies filled with wrong people, many trusts broken and crime on a higher rate.

I was thrown into a surprised state when I saw their sponsored page on my Facebook feed. People of different race were seen in a short video displaying how it’s worn and the outcome look.

Yes, it’s interesting and amazing to watch but sitting back I realized how much damage it was going to cause looking at the number of people across the globe requesting for it at the comment section. This is indeed not the time to sleep.

We only knew of robots in cartoons, in the 19th century but today in the 21st, they walk up to you and talk to you like HELLO? Who is not asleep but wide awake as I am and understanding that, the human race or labor could be forced to be non-existent?

This may be the other side of darkness, and this is happening with humans very much unaware. Well let me announce to you that, robots are no longer huge machines or toys but in the form of humans now. They look just like you.

Robots are now chefs, receptionist, footballers, police etc. with the use of technology. Their creators believe intelligent robots could compete with human beings and are therefore close to replacing people with these robots. Are you still asleep? Your certificates will soon be worthless.

Some of these robots are patrolling the streets taking orders from restaurants and some even play football. We should rejoice for such a hit or fear that in the future not very far away, comes the rebellion of machines.

They have this artificial intelligence that in the near future scientists will bring back to life great stars of music, cinema and sports of the past so that these can participate in new projects.

Something similar is already happening today as holograms have been used in participating in a Michael Jackson dance five years after his death. In a hotel in Tokyo, it has been recorded in the Guinness book of records as the first hotel to have friendly robots who receive their guests.

Their human companions claim that their guests like to deal with the robots because they are always in a good mood. Oh, my world: can you even imagine? we are even endorsing what’s about being our worst nightmare. Well, we do that all the time, and it hits us back in the face, and that is why you need to wake up.

They are also in place of flight attendants. They distribute food and drinks to passengers in a plane and they are able to serve in the same way human flights attendants do.

They come equipped with hot food and drinks as they move silently. They can write down orders and can be called anytime through a smartphone. Does it seem funny?

Amazingly, there are robot footballers as well who are trained for international championship matches and people pay to go to watch. Who knows, they could be replaced with the real players as that is the objective of the creators. They even play with the rules of FIFA. Don’t worry your, Messi and Ronaldo won’t expire, they will be replaced simply with robots, there is already a robot of Ronaldo.

They take information, clean dishes and can work at cafes, restaurant and even hospitals where human lives matter the most. They cannot get lost or bumped into people at crowded areas as they are equipped with sensors to avoid collisions.

Sophia is another robot with an amazing feminine appearance. She is able to recognize faces, imitate human gestures and facial expressions as well as holding conversations and analyze these conversations made based on the information received.

Its inventor trusts that, over time the robot can interact completely with people by becoming a good helper for humans at the biggest events. Where my MC’s at? There are some also in the agriculture sectors who help to pluck food products during harvests without damaging the plants.

Before, there was the fear of high school girls coming home to snatch our husbands but my dear, that thought is becoming irrelevant. Why? Because there is in existence attractive robots for loneliness.

So, my dear wife who gets angry at everything, and have ‘I’m not in the mood’ as an anthem, well these robots are highly attractive than you are and hey they are never angry and they are always in the mood! They don’t want this or that before this, they are for all weather.

I am not scaring you, far from that. I’m just trying to wake you up; you are too far gone in your illusions and what you have to do for yourself. That’s not bad, but just understand that, these things are real and there is nothing you can do to avoid them because the force behind them is nothing you can deal with.

The only thing I deem appropriate in this end time, is for us to focus solely on our eternity and especially involving our children too, they really matter for the Kingdom’s glory. Stay awake!

Our SinoHydro road projects has silence NDC, when we talk th...
10 minutes ago

Let's go on our knees and pray for Akufo-Addo for God's inte...
37 minutes ago