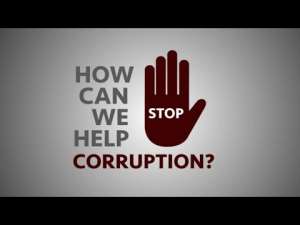 The pressure to kotow to the god of corruption is so high that it is becoming clear that anti-corruption crusaders are being fought back by corruption. Amidst this, the few successes chalked should be a platform to advance the anti-corruption enterprise.

Ghana must be losing her fight against corruption which continues to be a canker and a drag on national development. Unlike the 2016 election which was fought on the lines of promoting anti-corruption in the public sector and as a national enterprise, the 2020 election does not assure posterity as little is being said or committed when it comes to fighting corruption. Corruption is a difficult thing to fight and if it must be done, duty bearers at the highest echelon of power must not use mere legitimization tactics but be involved in rooting corruption out without fear or favour. It has come to notice that the first Special Prosecutor (SP) has resigned after he believes he has not been given the needed independence and resources to carry out his duty.[1] This doubles up the earlier concerns among the anti-corruption fraternity about how anti-corruption crusaders that were herald by this government in opposition are now inhibited from fighting the canker of corruption. This fight has been lost by the two major political parties and the future does not look promising.

The main beef for the SPs resignation is the events that follow the first-ever corruption risk assessment (CRA) that the Office of the Special Prosecutor (OSP) has conducted into the Agyapa Mineral Royalties transaction. The risk assessment report fingered some key government appointees and close associates to the government.[2] Subsequently, the resignation letter from the SP to the Presidency shows the extent to which the Presidency is not well versed in addressing the canker.[3] A lot has been presented in the full corruption risk assessment report, resignation letter and its accompanying press release already.

This article aims to provide some lessons regarding corruption risk assessments which the business community as a whole can learn from.

Integrity as a Key Anti-Corruption Strategy
What should be the best strategy for addressing the canker of corruption? The professional bodies and educational institutions have tried to use lessons on corruption as a means to fight corruption. While it is one of the options, it is now becoming clear that teaching people about anti-corruption may enhance their knowledge but without the needed integrity, they could not desist from the actual perpetration of corruption. They may be well educated about the complex forms of corruption and devise means to hide it from the various controls. This shows that a key strategy for addressing the canker is to promote integrity and reward integrity as well. Integrity is a personal choice which means honesty and acting under non-negotiable ethical standards. It appears that treachery is paying more than integrity, an indication that we may be losing all when it comes to creating the culture that fights corruption.

Corruption Risk Assessments
CRA is a diagnostic tool that explores the weaknesses within a system which may lead to the occurrence of corruption.[4] This is an effective tool as it focusses on the potential of corruption, rather than the perception, extent or existence of – corruption. It assesses the difference between the ideal situation and the actual situation when it comes to operating without corruption. Thus, it is a relevant complementary control mechanism which internal auditors and audit committees of corporate institutions need to inculcate in their menu of diagnostic tools. This assessment to some extent tries to evaluate the likelihood of corruption and the impact that corruption could have.[5] CRA informs anti-corruption strategies, policies and is vital for advocacy purposes. Multi-period CRAs can be used to track the changes of corruption risk over time, in public sector institutions, private sector institutions and donor support programs, among others.

Some analysts argue that the OSP is a total waste of national resources as the office does not appear to achieve its intended objective. Beyond all the political economy issues, there are practical lessons which the business community need to learn from the first CRA report produced by the OSP. Ghanaian businesses are not fond of reporting on their anti-corruption strategies as part of their sustainability reporting. Secondly, many firms do not have the structures to conduct a periodic CRA on their operations. The Global Reporting Initiative (GRI) has a sustainability reporting framework which promotes the conduct of corruption risk assessment of operations and the reportage of the same to stakeholders. Having realized the relevance of the CRA produced by the OSP, private sector executives must take this diagnostic tool up as an internal corporate measure to fight corruption.

Disclosure 205-1, which is the first item to disclose on corruption aims to assess operations for the risks related to corruption.[7] Specifically, organisations are supposed to report the following:

a. Total number and percentage of operations assessed for risks related to corruption.

b. Significant risks related to corruption identified through the risk assessment.

Buy-In of the Top Executives and Corporate Boards

An important question that needs to be answered in the case of the OSP is, “Where was the 9-member Board for the OSP and what role did they play to make the work of the SP successful?”. Additionally, the content of the letter from the SP to the President seems to be a serious indictment which suggests that the full buy-in of leadership cannot be underestimated. IMANI Africa argued in 2017 that, “If the President and his government cannot stamp out waste and corruption from his seat of government then how can he be trusted to be able to do so across the two thousand or so entities more removed from his immediate control?”.[8] It is this type of top-level buy-in that should supersede the atmosphere created by organisations if they are committed to fighting corruption. For corporate organisations, there should be a high level of commitment from the C-Suite Executives and the Board. Any attempt by these two (2) that inhibits the needed processes to eradicate corruption will lead to failure and subsequent loss of interest by those that oppose corruption.

Conclusion
Not long ago, the Auditor General was axed from his office, and we have also witnessed the resignation of the SP from his office. Political leaders tend to pay lip services when it comes to fighting corruption. For the few leaders and anti-corruption crusaders, the risk to their reputation and their life is so high. The pressure to kotow to the god of corruption is so high that it is becoming clear that anti-corruption crusaders are being fought back by corruption. Amidst this, the few successes chalked should be a platform to advance the anti-corruption enterprise. Thus, corporate organisations should be committed to conducting corruption risk assessments, reporting on them and this should be led by the C-Suite Executives and the Boards.

[7] Corruption in this case is understood to include practices such as bribery, facilitation payments, fraud, extortion, collusion, and money laundering; the offer or receipt of gifts, loans, fees, rewards, or other advantages as an inducement to do something that is dishonest, illegal, or represents a breach of trust. It can also include practices such as embezzlement, trading in influence, abuse of function, illicit enrichment, concealment, and obstructing justice.

About the Author
King Carl Tornam Duho is a business and economic consultant with interest in using data science, machine learning and artificial intelligence to solve complex accounting, economics and finance problems. He is a CIMA Chartered Accountant and works as a research consultant and public policy analyst. He is a member of the Strategic Hub for Organised Crime Research (SHOC) at RUSI (UK). His research appeared in the Journal of Financial Crime and Journal of Economic Studies, among others. He recently presented his anti-corruption research at the 2020 Global Organised Crime Conference (see https://oc24.globalinitiative.net/6b/).