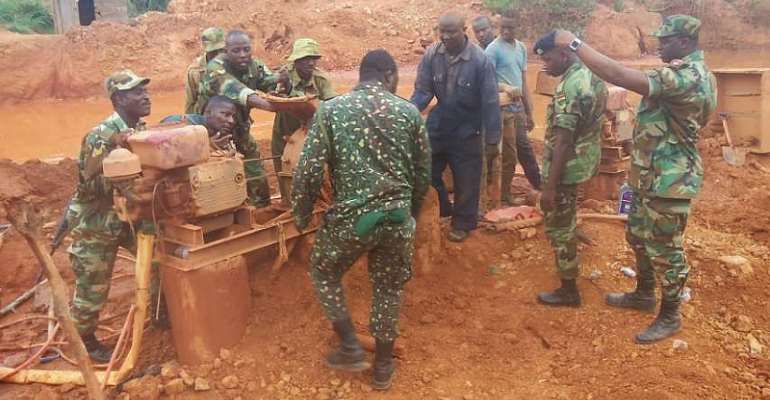 During a visit to Mpohor in the Western Region as part of his campaign tours, the National Democratic Congress (NDC) 2020 flag-bearer, John Mahama promised he would grant amnesty to all jailed unlicensed small scale miners in the country, arguing that it was sad the government arrested, prosecuted and jailed Ghanaians who were engaged in that activity but left a foreign national, Aisha Huang, free.

Following his comments on the issue, the New Patriotic Party (NPP) and some others in society attacked him saying it was hypocritical and not progressive. Former Member of Parliament for Bantama, Henry Kokofu and the Deputy General Secretary of the NPP, Nana Obiri Boahen have both slammed the former President for pledging to release prisoners, who were jailed for engaging in unlicensed mining activities (galamsey). The debate has resurfaced and needs to be put in proper context for the people to understand the logical reasoning behind John Mahama’s promise.

In the first place, the issue is comparable to the promise by the former President to regulate the ‘okada’ business when he returns to power. Small scale mining has become an ‘economy’ on its own, which requires regulation and assistance to grow into a local industry. Its regulation is very important because, as much as it is a source of livelihood for the people, it is also a threat to the very survival of the same beneficiaries due to the destruction it causes to our water bodies and the environment. So how do we ensure that people’s livelihoods are protected without stopping small scale mining? Regulation! This is where Mahama’s pledge is more acceptable than the attacks on him.

Secondly, it beats one’s imagination as to why the bigger fishes engaged in illegal mining are spared while the poor local miners are languishing in jail. There is no comparable basis to say the local Ghanaian ‘galamseyers’ have more powerful and heavy equipment to destroy the environment than the Chinese cash-laden galamsey queen, Aisha Huang, and other foreigners. Aisha Huang has multiple times more capacity in doing galamsey and thus poses a greater threat to the environment than Ghanaians who have nothing compared to her. It therefore does not make sense to incarcerate citizens and free foreigners for the same ‘crime’ even if it does not make diplomatic sense as claimed by the government.

Thirdly, it has emerged that the fight against galamsey has rather been a smokescreen to enable government officials to take over. The Inter-Ministerial Committee on Illegal Mining (IMCIM) has not only failed to stop the illegal business but has promoted it in order to cash in on it. Charles Bissue, the Presidential Staffer and Secretary to the Committee was caught in a video taking bribes to permit certain galamseyers to carry on with their illegal operations.

Ekow Ewusi, a top NPP Executive, has revealed how deep the party gurus were involved in galamsey but were not being jailed. In an audio tape in which he threatened to expose them all, the Minister of Environment, Science and Technology, Prof. Frimpong Boateng was heard saying Ewusi should not dare reveal the secret for the party needed money. The Minister’s son is also alleged to be involved in galamsey. Other kingpins of the NPP who have been accused of engaging in galamsey include the General Secretary John Boadu and the Ashanti Regional Chairman, Bernard Antwi Boasiako.

If these people could allegedly do galamsey without being arrested, prosecuted and jailed, why can’t other Ghanaians be given the opportunity to mine under a regularised system? Has small scale mining become a preserve of the ruling NPP executives and ministers only? Why is the law not applying to all equally? Over 900 excavators seized by the government from the poor locals have gone missing in the hands of the government.

Nobody in authority is willing to account for them. The goal of fighting galamsey has not been achieved as our water bodies are getting dirty by each passing day because ‘big elephants’ are now in charge of galamsey for which reason illegal mining cannot be fought any longer.

All Ghanaians are equal. What is good for those in power must be good for those outside as long as they all remain the citizens. As long as NPP executives can do galamsey, other Ghanaians can also do albeit with regulation to protect the environment. This is the gist of Mahama’s promise. In line with this, he also promised to release the small mining concessions seized from the owners back to them and monitor their operations. This will revive the dead local economies in most mining areas. We cannot sit in our country and watch foreigners come and make a living out of our resources while we beg them for loans.

Mahama has made sense and must be supported and not attacked hypocritically. The NPP has obviously lost the fight against galamsey.