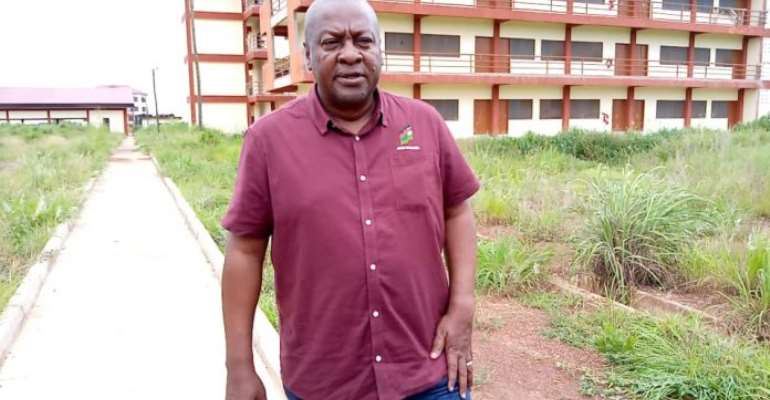 The opposition National Democratic Congress (NDC) has reiterated its commitment to end the double-track system associated with the Free Senior High School programme by completing all abandoned structures, especially the E-Blocks, to offer decent accommodation to students when the party wins the December 7 elections.

The NDC 2020 flag-bearer, Mr John Mahama said when given the nod as President in the December polls, his administration will complete all the 200 E-blocks for Community Day Senior High Schools, which he had started when he was in office. The former President explained that completion of the 200 E-blocks will ensure that the double-track system initiated by the current government will be completely scrapped.

This, he pointed out, will help to admit and accommodate more students, including Ghanaians abroad who wish to send their children home to Ghana to study and imbibe our culture. The infrastructure expansion drive, he said, will also ensure the establishment of decent schools in disadvantaged, over-populated and under-served areas, including the Zongo communities.

According to Mr Mahama, the determination to build top quality educational facilities in deprived communities is part of the NDC’s master strategy to totally end the unnecessarily stressful double-track system.

The flag-bearer was speaking at an event to introduce his running-mate, Prof. Naana Jane Opoku-Agyemang to the National Chief Imam, Sheikh Osman Nuhu Sharubutu and the Muslim community. Mr Mahama said, “One of the things we will do when we come back into office, and I know, Inshallah, we are coming back, is to complete the 200 community day schools we began so that we can bring a quick end to the double-track system.”

He explained that his running-mate is the best person to support him to achieve that mandate because of her active involvement as Education Minister during his first term as President. According to Mr Mahama, Prof. Opoku-Agyemang pioneered the community day schools project, adding that under her watch, 45 of them had been commissioned and had students studying in them, and 73 of them were ready for teaching and learning to start by the end of his four-year term.

“We will immediately complete all our E-blocks. One E-block can take a thousand [students], so if six of the abandoned projects in deprived areas like Upper West is completed, there will be room for 6,000 students. If we are able to complete these projects within one-and-a-half years, you can imagine how much room we will create for students. The plan says one-and-a-half years but I say maximum two years, we should have ended the double-track system," he added.

The government adopted the double-track system which began in some 400 Senior High Schools in the country to cater for the increased enrollment under the Free Senior High School programme due to a deficit in infrastructure.

Infrastructure deficit has rocked the NPP’s model of Free SHS, which has become a worry to parents. Education experts have also welcomed NDC’s promise to expand facilities because, according to them, stability will finally return to the senior high school system.

It’s beyond debate; Akufo-Addo has completely mismanaged Gha...
56 minutes ago