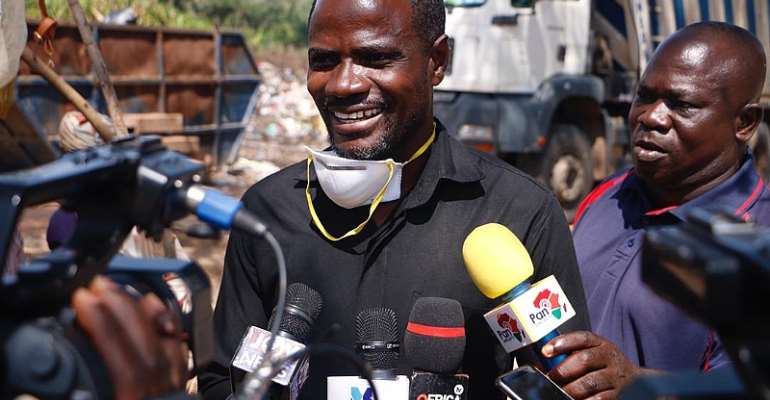 The Assemblyman for old site Apewosika Electoral Area at Cape Coast North Municipaĺty in the Central Region, Hon. Francis Mensah Egyir expressed joy when the Ministry of Sanitation and Water Resources (MSWR) evacuated a 50-year-old dumpsite in his electoral Accra.

The exercise formed part of the ongoing nationwide dumpsite evacuation exercise by the MSWR to rid the country of aged-old dumpsites.

The dumpsites evacuated in the Central Region includes; Kwseiprah, Amamoma, Akotokyir, and many other places in the Cape Coast municipality.

The ongoing exercise is in line with the President's initiative of the Clean Ghana Agenda aimed at making Ghana the cleanest country in Africa.

According to the Assemblyman, the area gets flooded whenever it rains and also unleashes a strange unbearable stench during the rainy season.

He also noted that residents always complain of frequent disease outbreaks such as malaria and cholera.

"We are happy to see the evacuation of the dumpsites because it will stop the floods and outbreak of cholera," he stated.

The Assemblyman has also appealed to the Cape Coast North Assembly and Zoomlion Ghana Limited to provide enough refuse containers and further widen the frequent collection of the refuse.

"We need more containers to collect the rubbish and Zoomlion to pick the containers on time to prevent spillage. The way forward is we are going to embark on intensive education on how to package the refuse well before disposing of them," he assured.

Akufo-Addo is confused over MMDCEs appointment – Ho Central ...
49 minutes ago