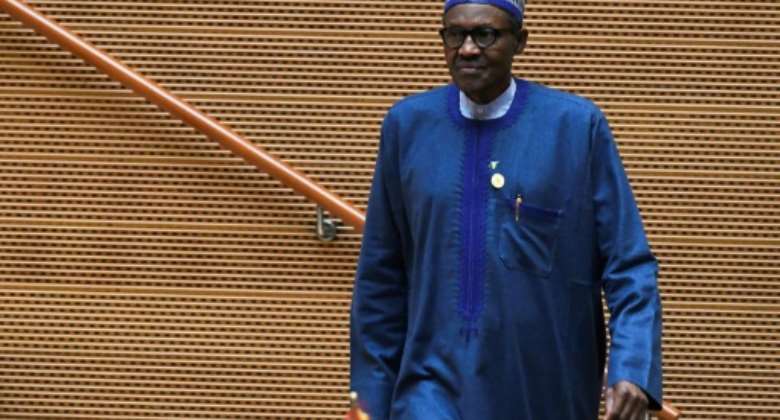 Opponents have criticised Buhari for dithering in the face of crises the country faces, calling him "Baba go slow". By SIMON MAINA (AFP/File)

Nigeria's President Muhammadu Buhari has faced a jihadist insurgency and economic recession, but youth protests that have spiralled into widespread unrest appear to be his biggest challenge yet.

The 77-year-old former military ruler has drawn fierce criticism for his slow response as the shooting of demonstrators unleashed chaos in Africa's largest city Lagos.

Evidence that his security forces gunned down peaceful protesters on Tuesday sparked fury at home and international outrage -- but it took Buhari two days to make a public statement.

When he did speak he was uncompromising as he called for an end to protests, shrugged off condemnation from abroad and failed to even mention the shooting of demonstrators.

"Buhari has been aloof and tone deaf and lacking in empathy, failing to react to something that has created such an outcry," said Idayat Hassan, director of the Centre for Democracy and Development in Abuja.

"He did not speak to the sombre mood of the nation and reassure the citizens."

Protests erupted on October 8 over abuses by the police's loathed Special Anti-Robbery Squad (SARS) with thousands of mainly young demonstrators pouring onto the streets.

Buhari scrapped the unit and vowed to reform law enforcement but the movement kept growing and began demanding better governance.

The protests laid bare the gulf between Nigeria's elderly leadership and younger generations desperate for a greater say. By PIUS UTOMI EKPEI (AFP)

The authorities appeared to be caught flat-footed as their promises failed to stem an outpouring of grievances at the ruling elite.

In the tinderbox of poverty and desperation of modern Nigeria, violence soon flared and the deadly crackdown came.

The protests laid bare the gulf between Nigeria's elderly leadership -- personified by the president -- and younger generations desperate for a greater say.

Buhari's first taste of power came before many of those who joined the recent protests were born.

In 1983 as a major-general he spearheaded a coup that overthrew democratically elected president Shehu Shagari.

His government launched a "War Against Indiscipline" as it cracked down hard on dissent and jailed what it said were corrupt politicians and businessmen.

Protesters blocked the Lekki toll gate in Lagos during the demonstration against police brutality. By Pierre FAVENNEC (AFP)

Three decades later he returned to power via the ballot box after reinventing himself as a "converted democrat".

But old habits die hard and Buhari has remained far more adept at keeping the powerful security forces on side than reading the mood of the country.

"His speech sounded like that of a military ruler, not that of a president elected to govern a country of 200 million with deep economic and social challenges," said Matthew Page, associate fellow at Chatham House in London.

"The 1984 military ruler's playbook is one Buhari is very comfortable with."

The current crisis feels a long way from the sense of change felt when Buhari became the first opposition candidate to defeat a sitting leader at elections in 2015.

He unseated then-incumbent Goodluck Jonathan on a vow to crack down on Nigeria's rampant corruption and end an insurgency by Boko Haram jihadists, going on to claim re-election in 2019.

But his time at the helm has failed to halt graft and insecurity and has been dogged by economic woes, ill health and now the heavy-handed treatment of protesters.

Living conditions for many remain dire, with half of Nigeria's 200 million people living in extreme poverty. By PIUS UTOMI EKPEI (AFP)

Nigeria, Africa's largest economy and oil producer, went through a recession in 2016-17. Then in 2020 it was hit by the double-whammy of the coronavirus and falling crude prices that have hammered government finances.

Living conditions for many remain dire, with half of its 200 million people living in extreme poverty, and rates of youth unemployment remain high.

Across the country in the northwest clashes between rival ethnic groups and attacks by armed gangs have seen villages torched and communities forced from their homes.

Opponents have criticised Buhari for dithering in the face of the many crises, labelling him "Baba go slow" after he delayed naming a government for months.

The bloodshed in Lagos is just the latest in a string of major abuses the security forces have been accused of under Buhari's watch.

In one of the most notorious, the military killed around 350 Shiite Muslims from an opposition group in December 2015.

While the government was able to weather these incidents, the shooting on October 20 broadcast live on social media will not be so easy to dismiss.

"Buhari himself will suffer a major blow to his credibility," Amaka Anku of Eurasia Group wrote.

Beyond the public ire, the shooting and his slow reaction look set to hit his standing in the ruling elite until he leaves office in 2023.

"These blunders will haunt Buhari for the rest of his presidency and undermine his political relevance," Anku wrote.

As for the youth, many say these protests are a turning point.

"'What next' is us collectively building the type of country we want to live in, brick by brick," said Moe Odele, one of the protest's organisers.

"I am energized & do not feel defeated at all," she wrote on Twitter. "We strategize & we move."